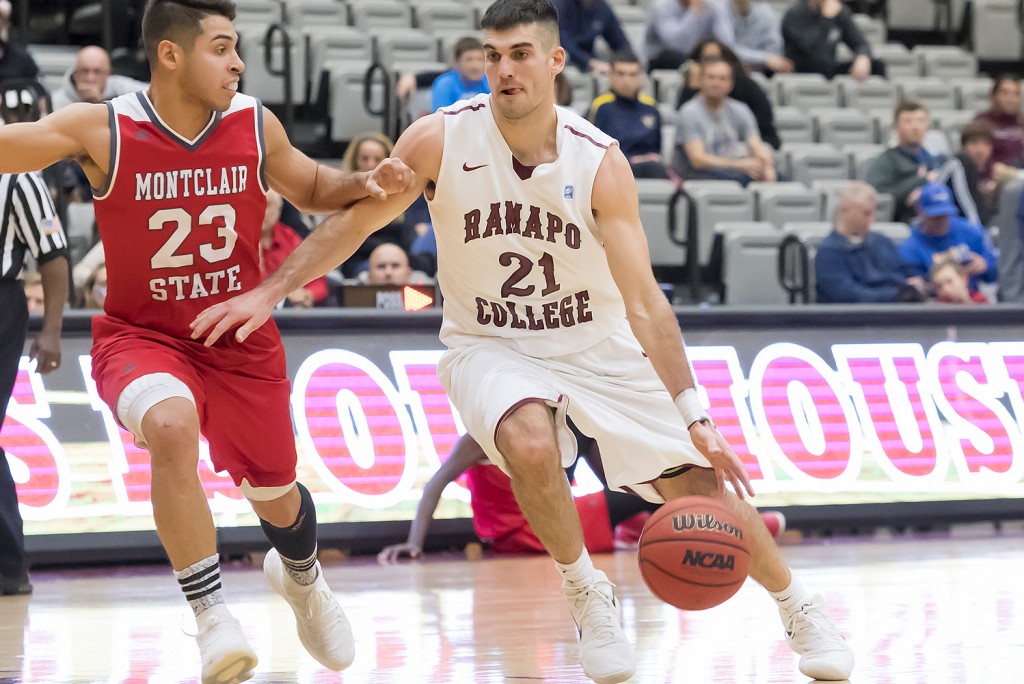 The Ramapo College men’s basketball team capped off a dominant season by clinching their second straight New Jersey Athletic Conference title in a 67-59 win over William Paterson. Now with the Roadrunners adding another NJAC trophy to the mantle, the team looks to continue their magical season in the 2017-18 NCAA DIII National Tournament.

The Bradley Center was booming Saturday as the No.1 seed Roadrunners geared up to play the No. 6 seed William and Paterson Pioneers. The tension was high as both teams realized that they were one game away from hoisting the NJAC trophy and earning an automatic berth into the 2017-18 NCAA DIII National Tournament.

The atmosphere was intensified due to the large volume of William Paterson fans showing up to support the team; one student, William Sperduto saying that “you could see the gym split between orange and maroon.”

With the stage set, the game started off to find both teams evenly matched. The Pioneers made three of their first four shots to take an early lead, but the Roadrunners’ Tom Bonacum helped eat away at that lead with 12 first half points.

Guard Patrick Peterson helped the Roadrunners create a healthy lead when he came off the bench to score seven points. The Roadrunners’ seemingly effortless offense combined with their lockdown defense limited the Pioneers to 29.7 percent shooting in the first half created the perfect mixture to let the Roadrunners control the half.

To start the second half, the Roadrunners were up by 13 points, but it wasn’t enough to contain William Paterson. The Pioneers battled back with the help of Richy Espinal, who had 14 points in the half and went 6-of-10 for shooting. The Pioneers were even able to pull within one point after Sean Smith knocked down a deep three.

The momentum seemed to be swinging in the Pioneers favor. Their fans were getting louder and it seemed that the Pioneers finally found their groove at a critical time. However, the Roadrunners very own Nick Stanek was able to hit a clutch three making the score 60-55 and giving the home-crowd something to cheer about.

Stanek also hit a layup on the next possession putting the dagger into the Pioneers. The Roadrunners were able to hold off The Pioneers for the remainder of the game, winning the game 67-59.

This is now the fifth NJAC trophy that the Ramapo Men’s basketball program has won. The current team was also able to earn the achievement of staying undefeated at home this year, but the season isn’t over yet.

The Roadrunners will travel to Williams College in Massachusetts this weekend to play in first and second rounds of the 2018 NCAA Tournament where they will go against Moravian College on Friday, March 2 at 5:30 p.m.

Even though the game is being played several states away in Massachusetts, the team can still use fans’ support. For the diehard fans, a bus will take them to Massachusetts on Friday to watch the game. There should be plent to do there : see some sights, eat some delicious sea-food and watch The Roadrunners tear it up on the court Friday.