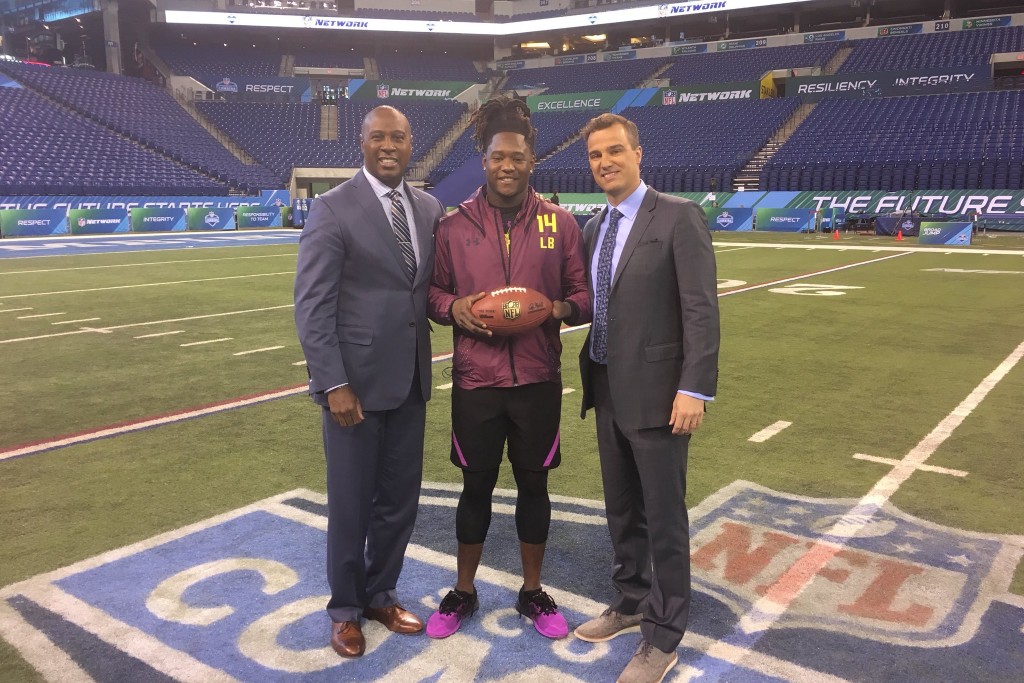 March always marks the first month without football since summer, but the NFL Combine offers some closure as college athletes preparing for the draft get to test their skills out. This ranges from how fast you can run a 40-yard dash, to your vertical jump and how many bench presses you can do. There is one specific player that has caught the eye of many viewers and scouts because of his outstanding performance throughout the combine. His name is Shaquem Griffin, a linebacker who played for the University of Central Florida Knights throughout his college career. He won a National Championship in 2017 and became a two-time First-team All-ACC during his 2016 and 2017 campaigns. These accolades and accomplishments prompted Griffin to be invited to the NFL Combine to be scouted by NFL general managers and coaches. On March 4, Griffin was on full display as he ran a 4.38 in the 40-yard dash (the fastest by a linebacker in the last 10 years), benched pressed 20 reps and nine foot, nine inch broad jump. Of course, Griffin did all of this with an amputated arm.

Born to his parents Terry and Tangie Griffin on July 20, 1995, Griffin was born with amniotic band syndrome, which is a congenital disorder that causes limbs to become deformed at birth. For Griffin’s case, his left hand was severely affected by the disorder as his fingers never fully developed. Doctors deemed surgery was too risky to perform, making Griffin live with his deformed left hand for the first four year of his life. Unfortunately, his hand was very delicate and caused great pain anytime it came into contact with something else. In an interview with ESPN, Griffin said, “Everything I touched burned.” At age four, Griffin tried to self-amputate his hand with a butcher knife in his kitchen due to the excess pain. He pleaded for his mother to have his hand cut off, and the next day she scheduled a surgery to remove it.

After the surgery, Griffin was home and playing football in the backyard with his twin brother, Shaquill. Both siblings were very much involved in athletics as children, playing sports such as baseball, track and football. The two were inseparable and through sports, helped live their dream and passion together. They both attended UCF, but Shaqill declared for the draft last offseason and was taken by the Seattle Seahawks in the third round. Shaquem stayed for another year and thanks to head coach Scott Frost, received a healthy dose of playing time on defense. Even with his ailment, Frost named Griffin a starter and his blazing speed and hit power for his position were put on full display for his last season at UCF.

Griffin is projected to go somewhere in the mid rounds of the draft, but his hard work and resilience have created a buzz in the NFL community, along with a chance at making league history if he’s picked in the 2018 NFL Draft.