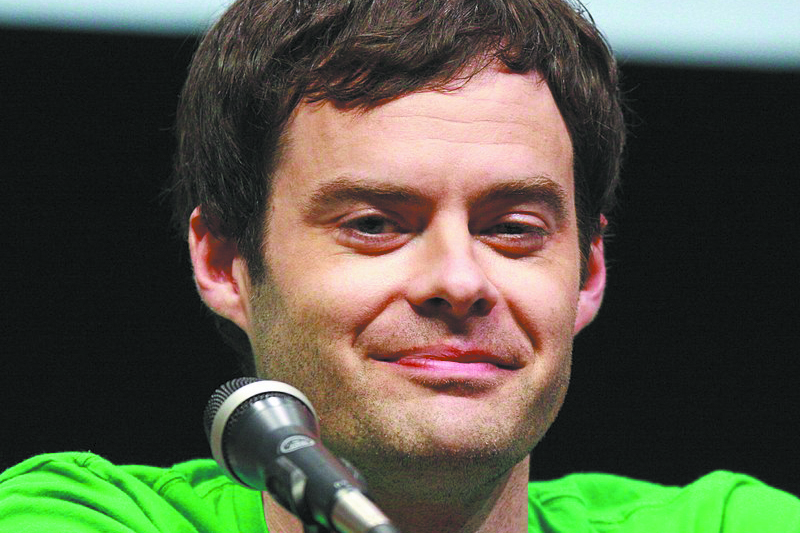 Former Saturday Night Live cast member Bill Hader returned to the comedy show as host on March 18. During the SNL episode, Hader played some iconic characters such as Stefon during the Weekend Update segment, Communications Director Anthony Scaramucci in the cold open and Devin in the Californians skit.

Bill Hader joined SNL in 2005 and exited the show in 2013. Throughout his time on SNL he was largely known for the character Stefon during the Weekend Update segments. Besides his trademark character as Stefon, he’s also remembered for iconic impressions of Rick Perry, Clint Eastwood, Charlie Sheen, James Carville and Al Pacino.

Stefon is a shy yet flamboyantly gay city correspondent who is called upon during Weekend Update to share his knowledge about travel destinations and must-see sites. His famous trademark involves covering his mouth with his hands together showing that he may have anxiety. In real life, the actor also suffers from anxiety, so Stefon’s behavior is a mirror image of Hader.

Joining Bill Hader, some of the other former cast members and writers made appearances such as John Mulaney, Fred Armisen, and John Goodman.

During Hader’s opening monologue he mentioned his past experiences with being on the show, “I’ve done 8 seasons and 210 episodes of SNL.”

He remembered that during his audition he was nervous when Tina Fey laughed, but it helped him get through it. The night of the opening monologue he was still nervous, which shows that even seasoned cast members get nervous during the show.

“I was nervous for every one of them and I am nervous now,” said Hader in his opening monologue.

According to People Magazine Hader left the show in 2013 due to SNL cast members Kristen Wiig and Andy Samberg leaving. Wigg and Samberg were good friends with Hader, and there was a desire to move his family to Los Angeles so he and his wife could better balance raising kids and maintaining careers.

According to a Times report, Hader realized his time at SNL would be coming to a close due to the constant changes at SNL with so many cast members leaving. He said, “It was a hard decision but it has to happen at some point, It got to a point where I said, ‘Maybe it's time to go.’”

Since his departure from SNL he has starred in the movie “Trainwreck,” voiced characters in the movies “Inside Out,” “Cloudy with a Chance of Meatballs” and “Finding Dory.”

Many cast members post-SNL continue to have successful careers such as Jimmy Fallon, host of Tonight Show, Seth Meyers, host of Late Night Show, and Tina Fey, who starred in “30 Rock,” wrote “Mean Girls” and writes for “Unbreakable Kimmy Schmidt.”

According to Nielsen Media Research, Bill Hader’s recent appearance pulled in over 2.6 million viewers. The viewer ratings are projected to increase due to the political skits that the writers and cast members produce.