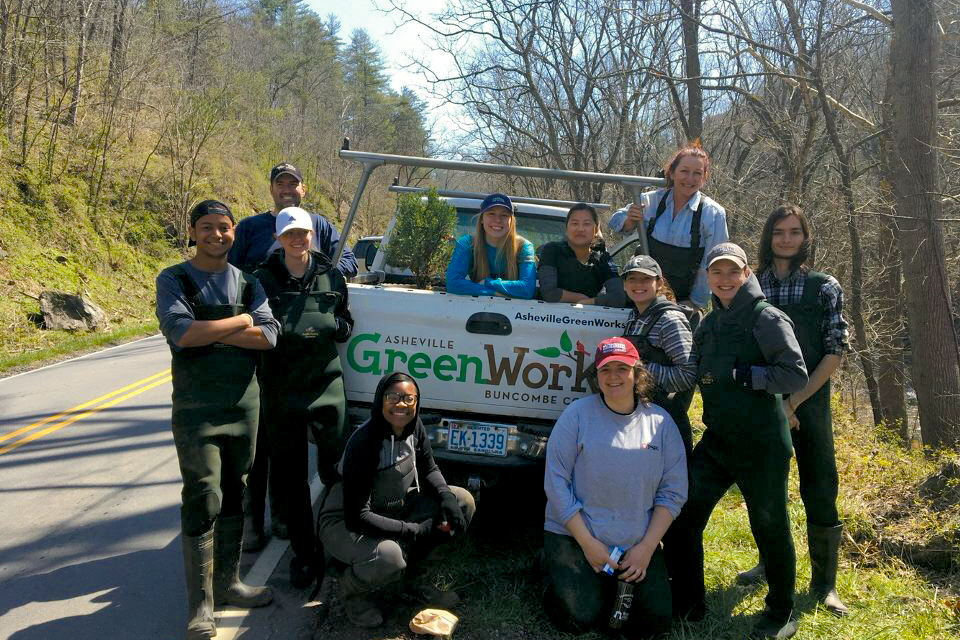 Instead of taking the time to relax over spring break, nine Ramapo students traveled to Asheville, North Carolina where they spent four days participating in numerous community service projects around the city.

Three of the days were spent working with Asheville Greenworks, a local nonprofit organization created in 1971 who, as stated on their website, “inspires, equips, and mobilizes individuals and communities to take action to care for the places we love to live.”

With the help of over three thousand dedicated volunteers, Asheville Greenworks is able to tackle projects such as, “urban forestry, environmental cleanups, anti-littering and waste reduction education, creation of green spaces, care and preservation of Asheville’s rivers and trees.”

As shown on their website, in 2017, the organization collected over 63,000 pounds of litter, planted 706 trees and educated nearly 11,000 community residents and students.

During their time with the non-profit, Ramapo students and faculty members assisted with seven different projects.

The first project included clearing an area of a park of invasive plant species, such as privet, that were encroaching and smothering the noninvasive plants. Multiple trees had deep scars in their bark from the privet that grew up around it and was strangling the tree. Huge vines were also pulled and cut down from larger trees, allowing them to be given the chance to flourish.

The area is zoned for the creation of an Adventure Play park that will enable children to use their imagination as they play with what some would consider to be “junk” like wooden planks and cardboard boxes.

The group also aided Asheville Greenworks in completing projects at their nursery that would enable Greenworks to more effectively help the community. Students worked together to shovel a truckload of dirt into a designated area, dig two-foot holes and cement wooden poles that would later become the walls of a “dirt pen” for fertilized soil and organize the tool shed.

Day three with Greenworks included a fruitful roadside cleanup that resulted in over 10 bags of trash. Students also dressed in waders and boots and took up the task of cleaning up a creek. Cigarette butts, plastic bottles, fast food garbage and plastic bags were among the most commonly found items.

After the cleanup, Sharmane Scott, a senior, said, “It was eye-opening to see how much people don’t realize that what they do harms the environment.”

The final Greenworks project took the Ramapo volunteers to a town square where they had to work together to quickly lug huge donated planters containing baby evergreen trees onto trucks. The planters were then emptied and the trees hooked up to an irrigation system that would allow the trees to grow until they were ready to be planted someplace else.

Workers had to watch out for needles hidden in the soil, a sign of the heroin epidemic that is growing in Asheville.

The Ramapo group also aided the historic local community of Shiloh, who they have worked with for the past four years. The relatives of the current Shiloh residents originally resided on the grounds of the Vanderbilt Mansion but were forced off and given money to move their dead and build the church that is now the center for their community.

In past years students helped to build a community garden and cleared an area for children to play. This year, Ramapo cut down invading bamboo, righted a fence that was knocked down by a tree during a storm, deconstructed and removed a part of a huge tree stump and cleaned up part of the church’s graveyard that contained gravestones marking back to the 19th century.

The Roadrunners even went to visit Norma Banes, a Shiloh resident and former president of the Shiloh Community Association. Many were touched by her warmth, determination for the betterment and continuation of her community and the immense gratitude she had towards the students who were pitching in to help her longtime home.

“It reminded us all how much the people in the community appreciate volunteers,” said senior Manuel Camilo after meeting with Mrs. Banes.

“So much can be taken away from this trip. I not only learned a lot more about the impact volunteering makes but I also had so many personal accomplishments,” said Ramapo sophomore, Alexis Tucker. “Pulling that pole out of the ground and lifting those incredibly heavy planters made me realize how strong and capable I am of doing anything.”

The trip to Asheville, North Carolina was only one of the many trips that the Civic and Community Engagement center plans and offers to Ramapo students. If interested, students can visit the office in SC- 213 or visit their website.