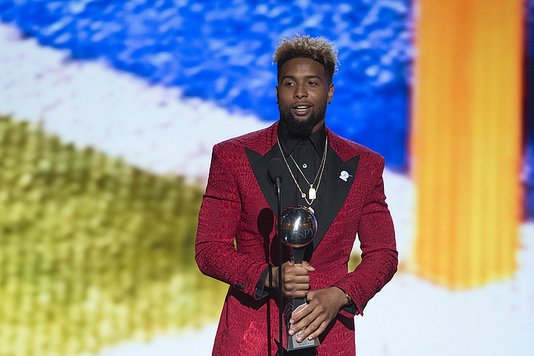 Odell Beckham Jr. has been in the limelight for most of his young career. After having a stellar rookie season, Beckham proved he wasn’t a one-shot wonder as he put up 13 touchdown receptions in 15 games in 2015.

In 2016, he single-handedly took over in two games against the Baltimore Ravens and the Dallas Cowboys combining for over 300-yards in both games. Beckham took a slant to the endzone in each contest for the eventual game-winning touchdown.

He’s constantly breaking reception, receiving yards and touchdown records for his young age and has showed that he is a generational talent across the league. Yet, due to question marks surrounding Beckham’s off-the-field actions and asking price for a contract, there have been rumors swirling around that the New York Giants could possibly not resign him and even trade the star player.

It all started a few weeks ago when a video surfaced of Beckham sitting on a bed with a few other people around him. In his hand appeared to be a cigarette and one of the people in the video appeared to be mixing a white substance with a credit card.

The video was a cause for concern since the NFL has strict rules about drug use among league players, especially in Cleveland Browns star-wide receiver Josh Gordon’s case, as he missed two full seasons because of failed drug tests.

Although Beckham has yet to take a drug test or fail one, media outlets were on the fritz about the video. Beckham Jr. is known for his flashy lifestyle outside of football, as he is usually hanging out with various celebrities and athletes like Drake and Cristiano Ronaldo.

Giants owner John Mara said, “I think too often he allows himself to be put in bad situations and needs to use better judgement,” according to ESPN.com. Mara also explained that he’s “tired” of answering questions about Beckham’s behavior.

In Beckham’s defense, he never has gotten into real trouble with the law. The only team activity he skipped last season was OTA’s or Organized Team Activities, but he explained to many people that he was preoccupied working out in California. For many players in the NFL, they are scared of getting hurt during their prime, since that can hurt their chances of getting a good contract before their career ends.

Not many people can blame Beckham for this mindset since he isn’t making much money even though he is a top three receiver in the league. His elite production and consistency through every season should be more than enough to land Beckham a similar salary to the other NFL elites in the league.

As of right now, Beckham is playing on his 5th-year option off of his rookie contract. This means that at the end of this season he can sign a long-term deal with New York, get franchise tagged or become a free agent.

Even though there are rumors about Beckham’s departure from New York, the Giants have made it apparent that they want to keep him and will first try to resolve a long-term deal.