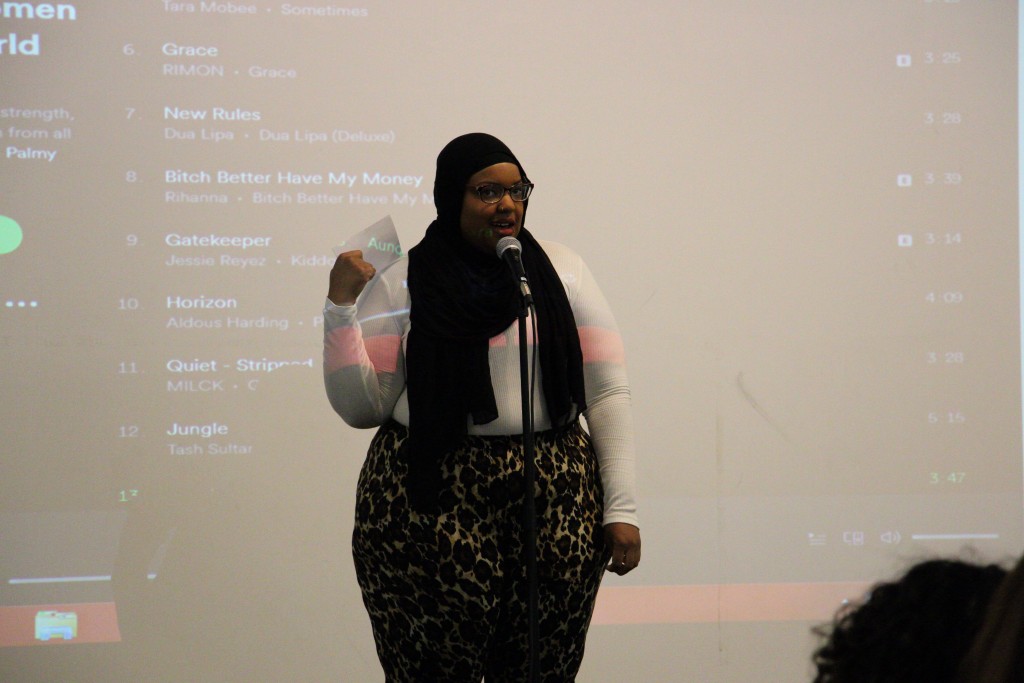 In the past year, women have banded together and proved that feminism is not a trend, but is instead a necessary measure needed to dismantle inequality throughout the world.

From the #MeToo Movement to the Women’s March, women have demonstrated unity and showed that being female is something to celebrate.

Ramapo College took part in this celebration by partaking in Women’s Herstory Month throughout March. All month, numerous organizations and clubs have showed their appreciation for all that women do by hosting events aimed at lifting up females as well as showcasing intersectional feminism.

Vernon’s speech centered around “unveiling the forgotten and hidden struggle of women,” so she began by addressing that March 27 was Muslim Women’s Day. In a post on Vernon’s Instagram, she wrote, “I’m so grateful to be a part of the changing narrative. Grateful that I don’t fit into a box. And that I can be unapologetic in my expression.” Vernon explained that she did not always feel this way, though, and struggled with identity issues throughout the course of her life.

“I grew up a fat black girl in Detroit to a single mother,” said Vernon.

Additionally, Vernon said she grew up in a time where many people in the United States did not know what a Muslim was.

Vernon said that she grew up idealizing white, Western culture, which ultimately wreaked havoc on her self-esteem and sense of worth. She found herself obsessed with the thin white models that the media showcased, and developed an eating disorder and cultivated self-hatred as a result. Vernon also explained that she battled with mental illnesses like depression, and almost admitted herself into a mental institution.

Vernon’s life took a turn, however, in 2013 when she authored her body positive blog, Beauty and the Muse, which promotes finding beauty in everyone, and focuses on inclusivity and body acceptance. Vernon explained that she wanted her blog to include “all bodied women of all cultures,” showcasing people’s stories of all backgrounds.

Vernon also spoke on how the patriarchy has made it difficult for women to be themselves and has also made it so females are competitive with each other when they should be united in their struggles. She explained that women try to represent themselves as perfect and adapt to hyper masculine environments.

“What a lot of women don’t understand is there is power in being a woman,” said Vernon. She went on to say that women need to be allies for each other and not view each other with animosity.

Vernon also addressed the toxicity of the media and how it portrays the female body. She explained that even in purported body positive campaigns, the body types portrayed are still limited to those with flat stomachs and seemingly perfect curves. The narrow representation of women’s body in the media has the potential to invalidate female’s identities and be detrimental to their self esteems, just like it was with Vernon.

“The media has only one kind of thing they want to push, and that is sales,” said Vernon. She explained, though, that there are ways to combat the toxic media by using social media for good and sharing content made by women of all races and sexual-orientations.

Vernon also emphasized the importance of living by inclusion in everyday life. She expressed that education is key, and that true inclusion is not tokenism, but is instead about accurately portraying narratives of all backgrounds. She ended her speech by stressing the need for kindness and support, and making sure everyone in the audience knew that their voice mattered.

During the luncheon, sophomore and Women's Outreach Coordinator Nat Dahl, who along with senior and Women Center’s Office Manager Berly Rivera orchestrated Women’s Herstory month, announced the winners of the Ramapo College’s “Women of Vision Awards.”

“I definitely think this award is important for people on campus to be acknowledged for the work that they do here and just create a more inclusive environment for other students here,” said Meadows. “there are some pretty amazing women on campus so to be a part of this is definitely humbling and I’m very grateful.”