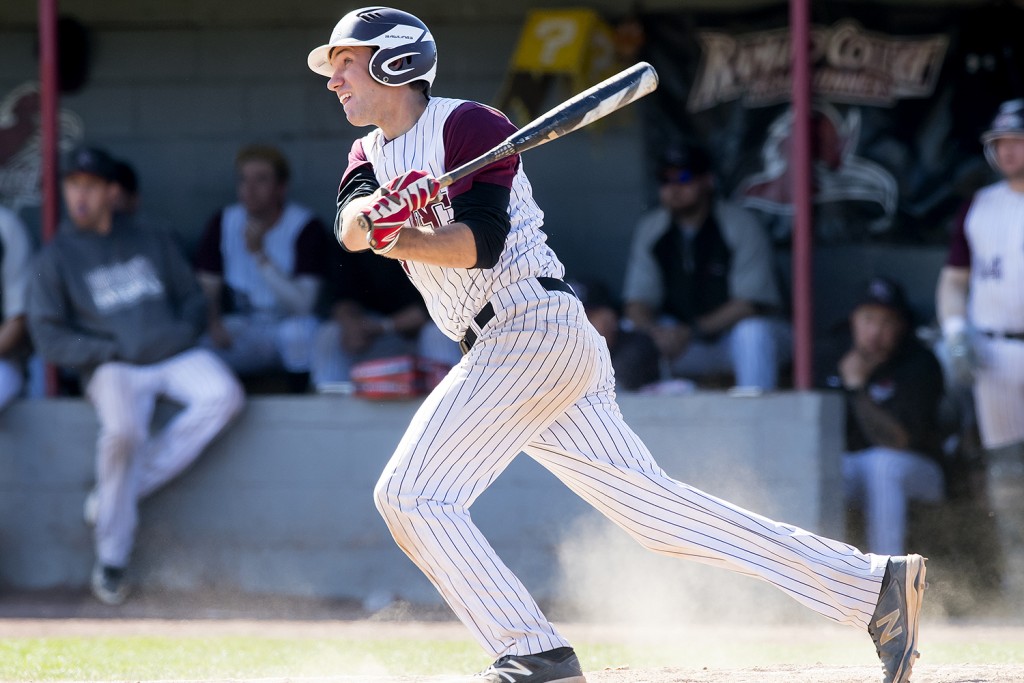 Ramapo baseball split their conference opener with #1/3 Rowan this past weekend, bringing their record to 14-7 overall. The Roadrunners came out on top in the first half of the double-header 6-2, snapping Rowan’s 11 game win streak.

Cory Heitler improved his record to 5-0 while striking out 12 in game one. Ramapo’s ace has struck out 11 or more in five of his six starts this season.

The Roadrunners put up two in the first inning thanks to a 2-run single off the bat of Joe Maugeri bringing home Austin Unglaub and Connor Walsh. A pitching duel ensued for the next four innings until Rowan tied it up in the top of the sixth.

The Roadrunners answered with 1 in the seventh, which would have been enough to seal the deal, but they added another three insurance runs in the 8th to hold on for the 6-2 win. Heitler went the distance in this one tossing a complete game scattering only 5 hits on the day.

Freshman Anthony Kuzmenko went 2-2 with an RBI in game one and won his second NJAC Rookie of the Week honor. Kuzmenko said, “I’m honored to have won this award once let alone twice, among very talented competition. I’m excited to see what this year has in store for the team and myself. I’m happy to be able to contribute to the teams success.”

Rowan tried to swing the momentum by coming out hot in game two, quickly putting up a run in the top of the first inning. The Roadrunners answered with a run of their own in the second thanks to an RBI groundout by Nick Camilleri platting a red-hot Joe Maugeri.

Rowan put up one more in the top of the seventh and another three in the eighth. Ramapo answered by putting up 2 in the bottom of the eighth, but it wasn’t enough to top the Profs. Rowan took game two by a score of 5-3.

Jerry D’Andrea took the loss despite another solid performance. He went 7.2 strong innings striking out seven and scattering only four hits.

D’Andrea said that “although we didn’t sweep, splitting with Rowan definitely gives us confidence going into our next couple of conference games this week. I know this team is looking to make a similar run to what we accomplished last year in conference and we’re excited to see if we can build on it this year.”

Jerry D’Andrea has high hopes for the Roadrunners this season, alluding to their strong 15-3 conference record from last year.

The Roadrunners have won six out of their last eight games and hope to ride their hot play into a big conference weekend with Kean on Thursday and Friday and a double header against TCNJ on Saturday.