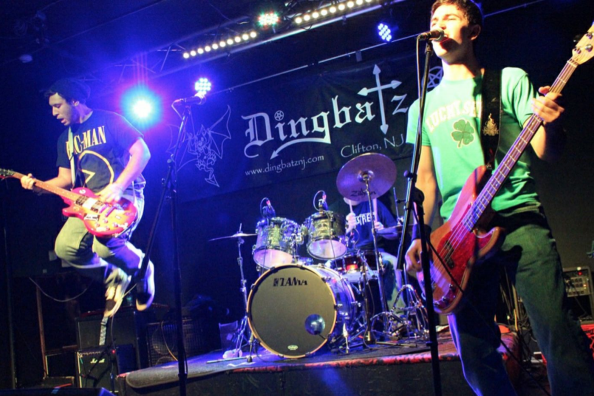 The Breakout, a modern alternative band performed at Dingbatz, a live music club in Clifton, NJ that hosts both national and local touring artists on Thursday, March 29. Band members within The Breakout include Ramapo College students Andrea Baez on lead vocals and Mike Giucumbo on drums, as well as their friend from home Devon Modery on bass.

The Breakout are a band out of Old Tappan, New Jersey. According to their website, the band plays punk, hard rock and pop, and have been inspired by bands like The Foo Fighters, AC/DC, Green Day and Three Days Grace.

The band formed while its members were still in high school, as Baez and Modery knew each other from their hometown. When Baez came to Ramapo College, he met up with Giucumbo at WRPR Radio Club, where they host a show called Get Ready Radio together on Sunday nights at 7 p.m.

Giucumbo decided to join The Breakout after their old drummer dropped out. During their show at Dingbatz, the band played a mix of original songs and covers ranging from pop-punk bands like Blink-182 to hard rock bands like Led Zeppelin.

The band was most proud to feature select tracks from their new album October. The band played into the night at Dingbatz, performing music from 7:30 to 10 p.m. In total their lineup consisted of eight songs including original tracks “A.D.D.," “Criticisms," “Nevermind" and a few others.

When he performs, Baez explains how he gets into his headspace. “I'm never really aware of anything on stage. I don't really remember being on stage ever in my life because I go into that mode.”

Earlier this year, The Breakout hosted a performance at the Ramapo Music Club’s band night. “So far we are not planning to do anything at Ramapo, we're talking to some people to maybe get something going but nothing is official yet."

The Breakout began recording in 2016 and currently holds a record deal with Battery Powered Records. Their music is available for download on iTunes, Spotify, Amazon Music and iHeartRadio.

The band is currently in the process of recording a special album which they hope to debut in October, in time for the band’s three-year anniversary.

The release will include a 13-track album titled "October," which the band previewed at their concert on Thursday. The Breakout will be performing on April 6 at The Clash Bar in Clifton, NJ alongside Baez’s other band, The Jersey Panic.