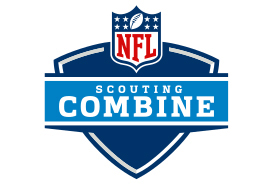 The NFL Combine is a weeklong skills showcase that features the league’s top draft hopefuls. The players spend the week going through a series of physically taxing drills such as the three-cone drill, vertical jump, and the 225-pound bench press.

While these physical tests are important and will give scouts and coaches a better idea as to how a prospective player will fare physically at the next level, the portion of the combine that gauges overall maturity and thinking skills is the interview portion. The interview portion of the combine also gives the organizations a better idea of how their prospective players interact with those above them.

"Some people are really trying to get in your head and test your reaction. I go in one room, and a team will ask me do I like men, just to see my reaction. I go in another room, they’ll try to bring up one of my family members or something and tell me, 'Hey, I heard your mom sells herself. How do you feel about that?’"

According to Sports Illustrated, the NFL is investigating the matter currently, as NFL spokesman Brian McCarthy told Sports Illustrated, “A question such as that is completely inappropriate and wholly contrary to league workplace policies. The NFL and its clubs are committed to providing equal employment opportunities to all employees in a manner that is consistent with our commitment to diversity and inclusion, state and federal laws and the CBA. We are looking into the matter.”

This is not the first time that a player has received these types of questions during combine interviews. Giants defensive back, Eli Apple, reported that the Atlanta Falcons organization had asked him about his sexual orientation, according to the New York Times.

The matter was looked into, but the questioning did not result in any form of punishment.

While it is understandable that the questions in the interview portion be thought provoking and in many cases, designed to keep the interviewee on his toes, there is no reason why questions of personal nature that in no way are relevant to football should be asked in these interviews.

Some may argue that the reason behind asking these questions is to see the type of response or reaction that would come from the player being interviewed, however, it would not be far fetched to say that the question on sexuality may be more serious than some think.

Michael Sam was the first openly gay player to ever be drafted back in 2014, but he unfortunately never saw action in a regular season game. One reason why this question may be asked is because of concerns about the dynamic of a locker room.

No matter the reason, the only questions that should be asked during the combine interviews are questions that will help a team decide whether a player would be a worthwhile pick. One’s sexual orientation does not dictate that in the slightest.