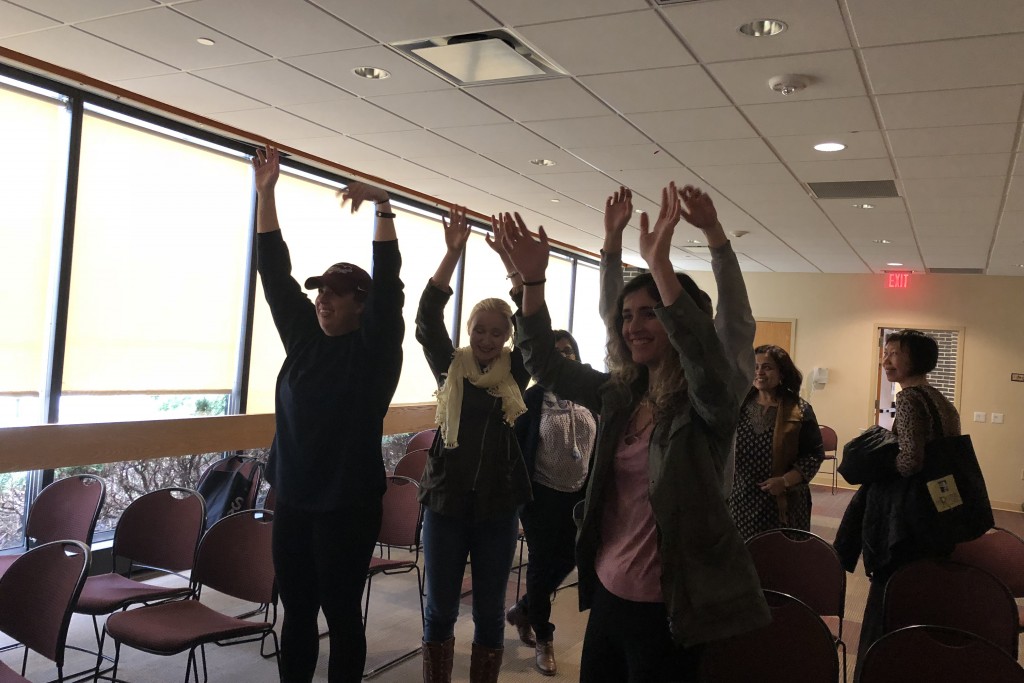 Research is often associated with boredom and dullness. When people think of research, they imagine hours of monotonous reading and analyzation, trying to decipher pages upon pages of dense text.

Research does require extensive work, but many experts utilize unique methods to conduct intriguing research in their fields that is anything but boring. Dr. Saumya Pant is one of these researchers. Pant, a Social Change activist and Gender and Health researcher, utilizes participatory theater within her work to gain insight into her studies.

Pant spoke at Ramapo on Thursday to discuss how she applies participatory theater into her research, specifically speaking on her studies pertaining to surrogacy in India.

Pant explained that there has been a growing trend in women from India acting as surrogates for people around the world who cannot conceive their own children and have strict concerns to surrogacy in their own countries. When she became aware of the fact that women in India were “renting their wombs for money,” Pant stated that she went to India and began conducting research on the subject to see if it was exploitation.

“India right now is the surrogacy capital of the world,” Pant said, explaining that the “absence of law” and inexpensive yet high quality health care in India has made it a destination for “fertility tourism.”

Pant explained that there are various factors that motivate women in India to be surrogates. She stated that money and aspiration is a major factor, as these women often are not wealthy. Therefore, these surrogates use the money they receive to provide for their own children, pay off debts, buy property and overall “improve their quality of life,” according to Pant.

Pant stated, however, that many of these women also become surrogates to help those who cannot bear children themselves.

“This comes from a very deep rooted value based society that India is,” said Pant. “There is a lot of courage in helping others.”

In many ways, the decision to become a surrogate can be empowering: she is taking control of her finances, risking her own life and giving the gift of a child. Pant explained, however, that the lack of regulations and law in India has led to exploitation in surrogacy as well.

“There’s very little compassion shown to the interest of the surrogate, simply because she belongs to a class of people who don’t essentially have much attention being paid to their welfare and wellbeing,” Pant said. Pant also stated that while people pay about $25,000 for a surrogate in India, the surrogate only receives about a fifth of this.

Pant explained that she had to build strong relationships with the surrogates she was studying, as many of them have become closed off as a result of reporters probing them insensitively for a story piece. Thus, Pant applied participatory theater into her research.

“Participatory theater erases the distance between the actor and the audience,” said Pant, explaining that roles of spectator and actors intertwine, allowing for anyone to become a bystander or a participant in the scene. The fluid nature of participatory theater allows for an even distribution of control, thus giving subjects power over their narratives, according to Pant.

She stated that this form of theater is popular with people who struggle with liberation for this reason, as it often focuses on problems pertaining to oppression and power struggles.

Pant explained when applying participatory theater to her research in India, she had to use local forms of theater, such as Bollywood. She then had to identify the issues relating to surrogacy by gathering stories from these surrogates.

Pant said the next step was preparation, which involved finding a location for the theater to take place, organizing groups, choosing stories, writing scripts and creating characters. Pant then stated that the final step was to evaluate the performances.

Pants presentation concluded with attendees being able to partake in participatory theater for themselves. Pant organized the room into three groups, and then led them through warm-up exercises and stretches. After the audience was loose and awake, Pant assigned the groups a scenario concerning either bullying or sexual assault.

The groups then got together to create a scene and then act it out in front of everyone else. Throughout the duration of the performances, audience members were allowed to jump in and switch out characters to help contribute to the dialogue and work on finding a solution for the problem.

Pants’ presentation was a way for students to engage in a new form of data collection and add to their communication and research skills. Additionally, it allowed students to become aware of an issue that has gone unnoticed for years.

“It was the most unique workshop I’ve ever attended at Ramapo,” said sophomore Becca Perry, who is majoring in communication arts with a concentration in global communications and media. “I knew nothing about India’s laws on surrogate mothers before going.”