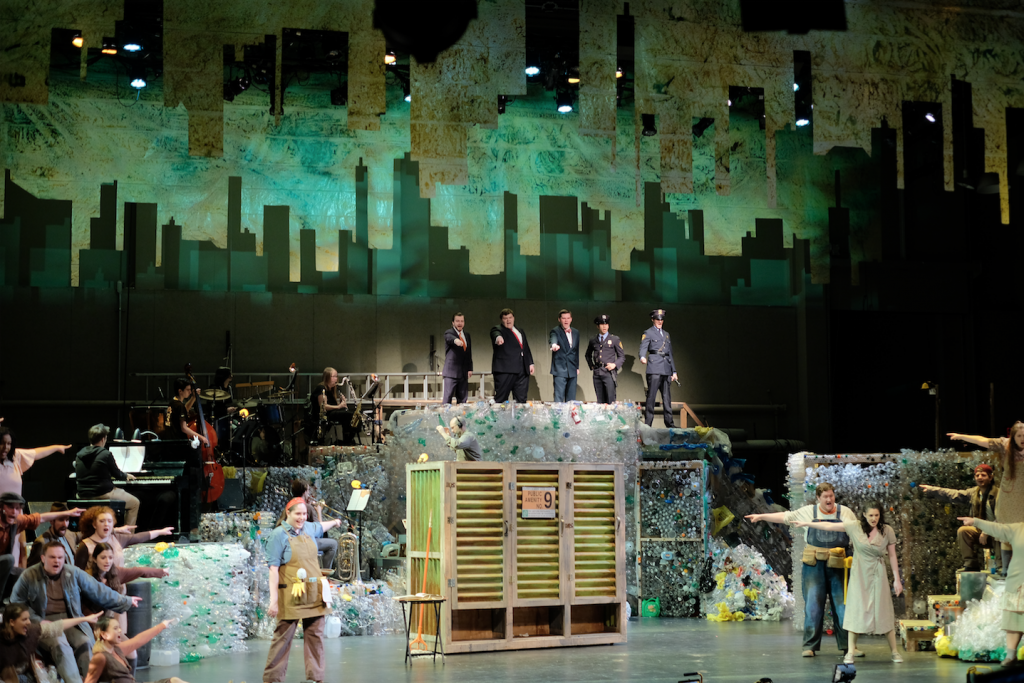 Over the past weekend the Ramapo College theater department produced the acclaimed broadway production “Urinetown.” Set in a post-apocalyptic world where a 20-year drought has caused severe water shortage, a malevolent government has banned private toilets and forced citizens to pay to use public amenities.

Allowing for companies to profit off of our most basic human needs. This concept being noted in the lyrics to one of the shows early songs claiming, “it’s a privilege to pee.”

Originally introduced to Broadway in 2001 by writers Greg Kotis and Mark Hollmann the show went on to win two Tony awards. “Urinetown” offers a satirical, self aware take on the common premises of revolution and greedy capitalists.

The show is constantly breaking the fourth wall and constantly alluding to the audience what will happen next. The show centers around a group of individuals located in the poorest sector of the city who often barely make enough to be able to relieve themselves.

The group decides, with the help of the wealthy daughter of CEO Cladwell to overthrow their amenity and "pee for free" exclaiming that the government has no right to and profit off their personal matters.

The actors as well utilized the auditorium by walking through the isles and speaking from the rafters where those watching never knew where to look next. Choreographer Laura Ward did an excellent job filling the stage with movement that elicited emotion from the actors when dialogue was absent.

Set designer Libby Stadstad created a unique set completely created by used bottles and plastic. At times the light would sparkle off the garbage in a way that almost made your forget you were looking at a used jug of Snapple iced tea. Tall staircases elevated the stage itself, allowing the actors to appear as though playing amongst the set.

Outside of the theater were projects completed by students showing different water crises around the world currently. The “Urinetown” project is a fundraiser created by senior Alyssa Sileo at the School of Performing Arts where her goal is to raise money in order to assist the residence of Flint, Michigan.

Donations were collected before, during and after the performance, making the fictional world of “Urinetown” seem not as implausible in our age of climate change.

What makes Urinetown stand out is its tone and message. Taking a serious crisis such as water shortage and corporate greed, and turning it into a satirical comedy works to the shows advantage. It may have caused the audience to brush aside the actors begging for renewable resources (literally) on their knees, but laughs were abundant the whole night.

Joking about our inevitable doom is something distinctly modern in a sense that art tends to laugh in our faces and tell us of our faults. Ramapo’s production of “Urinetown” does just that and has you begging for more.