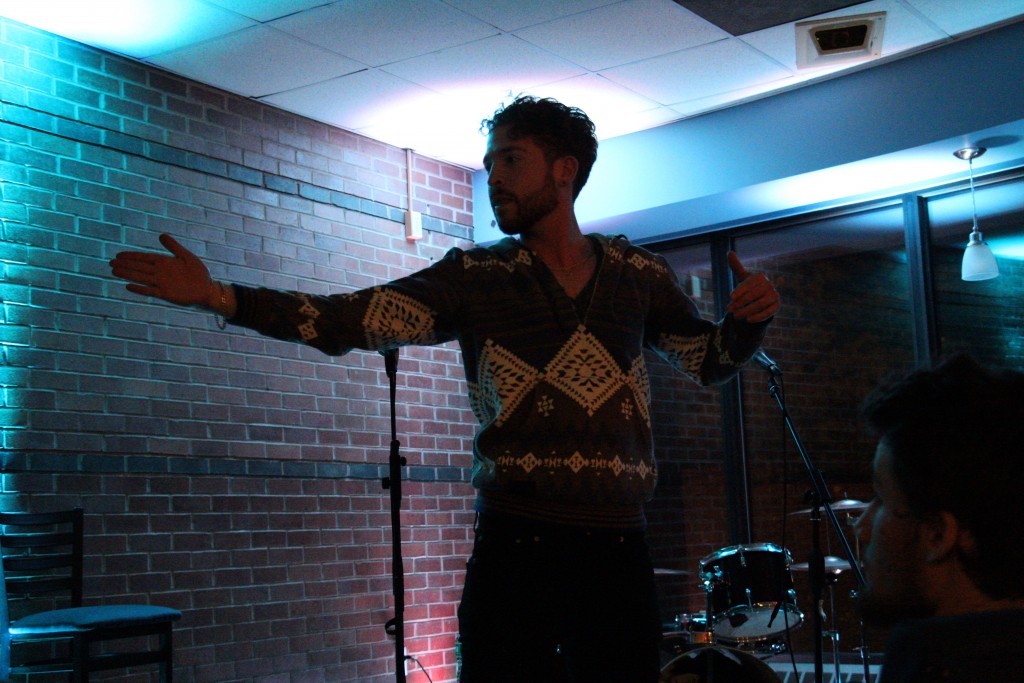 The College Programming Board held their last Open Mic of the semester in the Linden Lounge on Tuesday night. Given the upcoming library renovations that involve moving books and materials into Linden Hall, CPB plans to move next semester’s Open Mics into the new Padovano Commons.

Throughout the night, the College Programming Board raffled off a variety of valuable prizes like a $25 Applebee’s gift card and a $50 gift card valid at a variety of different restaurants.

Hailing from Livingston, New Jersey, energetic rapper Ethan Ross took the stage to share a couple songs from his Soundcloud with the audience.

His first song addressed complex issues that stem from depression and most specifically how people are quickly prescribed medications like Xanax before they are encouraged to talk to someone about the problems they’re experiencing.

“I try to incorporate other people’s stories with my stories because I feel like not all of them have a voice and I kind of want to carry that and represent them whenever I can,” said Ross.

He continued, “In verses like that I make a lot of references to what’s going on around me, and I’ve been very fortunate throughout my life, and a lot of people I’ve known have not been, so I’m like let me take a minute to put myself in their shoes.”

Other regular student performers returned to the stage to share a mix of original songs and covers with the audience. Before his set, Ricardo Meadows began explaining how he’s usually accompanied by his guitar, but wanted to attempt a solo vocal performance of the song “If Not Now” by the band Incubus.

“Incubus have always been a big influence for me. They were the band that introduced me into music,” Meadows said. “Just the musicianship of every member of that band just always takes me away because they’re all so talented and they’re always changing up their style. They have a song for pretty much any occasion.”

Throughout the semester, Meadows took vocal lessons through a Ramapo course to widen his range and versatility. Meadows explained that he chose to perform “If Not Now” because he feels it is one of Incubus’ leader singer’s best vocal performances.

Meadows said, “I just wanted to play that song so that way I could test my vocals just to see how well I’ve improved over the semester and how well I can perform one of my favorite songs.”

Heading closer to finals week, Open Mic Nights are a relaxing time for students to mellow out and catch up with their friends. It’s also a useful event for local musicians to network and foster the positivity that surrounds Ramapo's music scene.