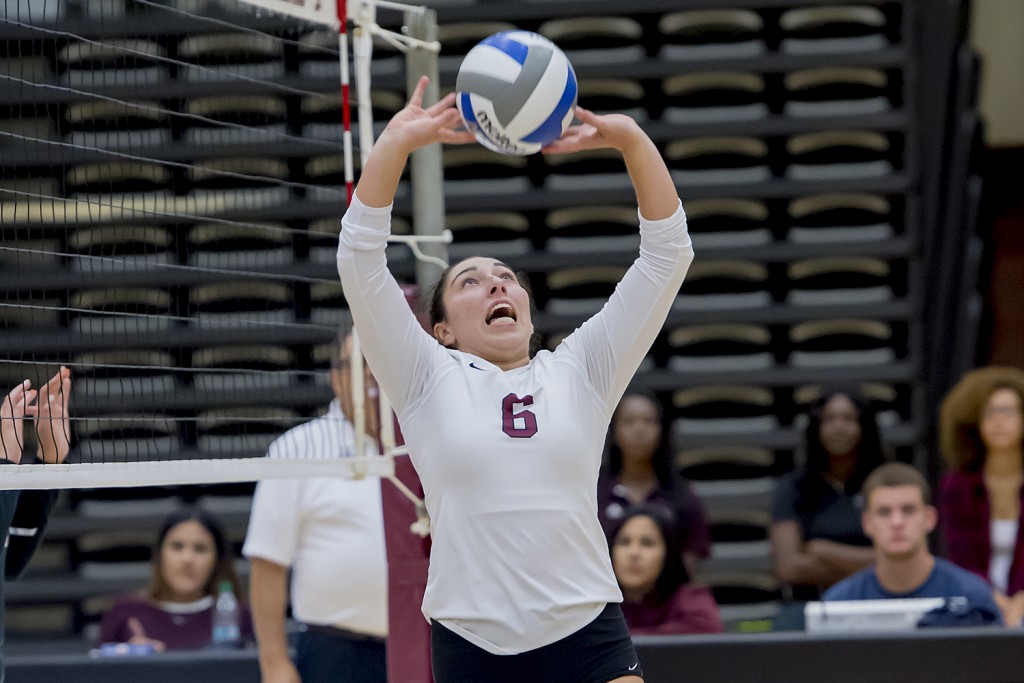 At the women's volleyball team’s tri-match on Friday, Sept. 21, the Ramapo College Roadrunners fell to the hands of the New York University Violets, 3-0: 25-18, 25-18, 25-17 during a high intensity match on campus at the Bradley Center. The first set started slow, with the Roadrunners trailing by 11 points, but continuing to battle. The final score of the game was 25-18.

The match preceded with RCNJ picking up the pace in the second and third sets, during which they kept NYU on their toes; playing both good offense and good defense, the second set was a three point game until the very end. The third set played out similarly, with the Roadrunners consistently trailing by three or four points.  The momentum was high from the getgo, with a lot of good volleys and exciting plays, but ultimately it just wasn’t enough for the Roadrunners to take the win.

Offensively, juniors Morgan Ridgway, Felicia Jimenez and Nathalie Ortiz dominated the court with a total of 23 kills altogether.  Ridgway and Jimenez each with eight apiece, followed by Ortiz with seven. Assists were dished out by setters Sara Correa with a team high of 12, and Kate Shirkey with 10.

Libero Kristina Semple was the backbone of the defense, collecting 18 digs alone.  Semple also contributed one ace and two assists. In addition, Ridgway and Ortiz recorded two blocks each, followed by Samantha Main who added one as well.

Defensive specialist Juliana Paslawksy was a strong component to the team supplying great serves all night and seven digs to the defense.  After the game Pasawky commented on the loss, “I think we really communicated well and played together tonight," said Paslawksy. "We had a bad loss yesterday, but today we really picked it up and had a good game.  Even though we lost, we had a lot of fun out there!”

When asked about their next game against the Middlebury College Panthers to finish out the tri-match, the freshman replied with a smile, “We’re ready.  We’re ready to compete with them.”

Throughout each set, captain Morgan Ridgway kept her team alive with her positive remarks of encouragement and her physical game. In addition to Ridgway’s eight kills and two blocks, she also contributed eight digs to her fellow Roadrunners. This past Monday, September 17, Ridgway earned NJAC women’s volleyball player of the week for the 2nd time already this season.  The following Thursday, she recorded a career high of 16 kills against Rutgers-Newark.

As a junior, Ridgway is definitely a player to look out for on the court. With an attendance of 120 fans at Friday nights game, RCNJ’s 27 points were out-hit by NYU’s 43.  RCNJ then closed out the tri-match against the Panthers the following morning at 11:00 A.M, in the Bradley Center. The Roadrunners fell to the Panthers in the non-conference match, leaving their record at 4-10 on the year.

This week, the women’s volleyball team is headed to Washington, D.C for the Worthington Classic where they will meet Gallaudet University and Dickinson College.