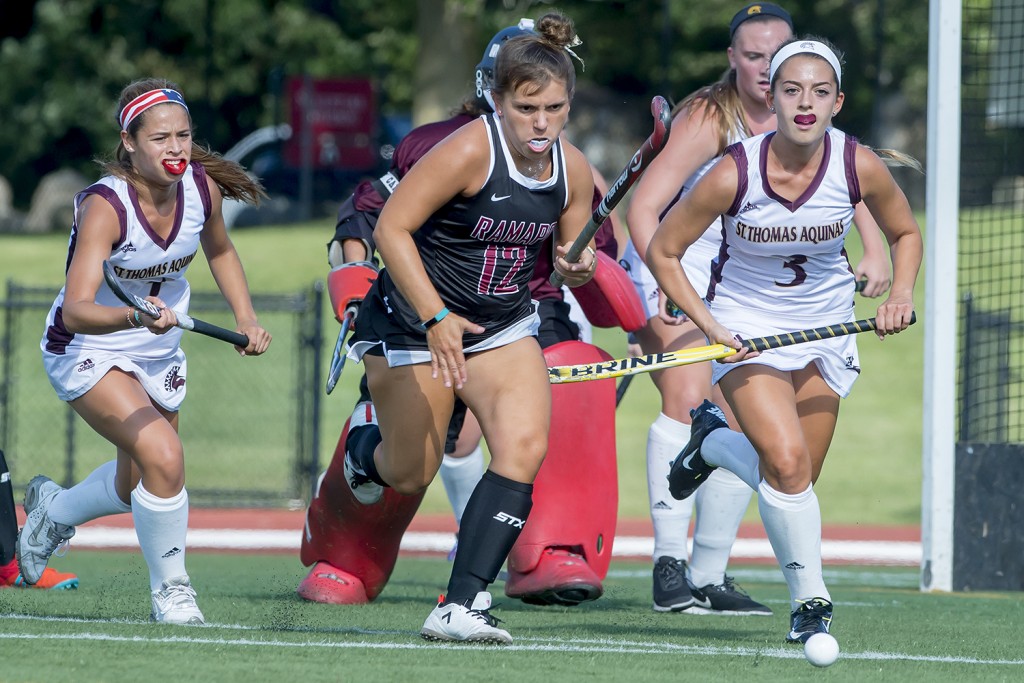 Ramapo College’s field hockey team faced off against The College of New Jersey Lions on Saturday, losing 8-0 and falling to 3-6 on the season with a 0-1 NJAC record.

Ramapo’s offense struggled in the matchup between the two, but there was a silver lining for the Roadrunner’s team effort. Even with the lopsided loss and what looks to be a lack of defense by the final score, there were multiple players that stepped up with big defensive performances.

This included sophomore, Erin Callery, and freshman, Victoria Ewanis, who each racked in key saves on Saturday. Senior, Stacey Faria also helped the team’s defensive effort with one save.

Along with the impressive defensive presence form Callery, Ewanis and Faria, sophomore goalie, Samantha Stolker, took the spotlight with her superb outing against the Lions. In her 10th game of the season, Stolker came up with a stunning 12 saves for the Roadrunners, which kept the game competitive in the latter part of the game.

Ramapo let up six goals in the first half, but tightened up their defense by only letting TCNJ extend their lead by two more points. With a better offensive performance against Lancaster Bible College Chargers on Saturday Oct. 6, the squad could yield in some promising results behind the efforts of Stolker.

The Roadrunners finished with a total of 15 saves by the end of the blowout loss.

One area that will need to be monitored for Ramapo is their shots on goal. TCNJ came up with a whopping 23 shots on goal, meaning it was only a matter of time before a few of them ended up scoring. The Roadrunners only accounted for two shots on goal, which ended up being their only two shots of the game.

Ramapo will try to put this behind them as they’ll be home for their matchup against the Chargers on Saturday. Lancaster Bible College has yet to win a game on the season and have continued to have offensive struggles as they’ve only scored four goals through their first nine games of the season.

When asked about the team’s upcoming game against Lancaster Faria gave some uplifting input. “This is our first year playing this team so I’m excited to see how we compete," said an elated Faria. "It’s always a challenge adjusting to a new team’s style of play but I have full confidence in our ability to perform. As long as we come out strong and believe it’s our game, there’s no reason we won’t end up with a win.”

The Roadrunners defense should be up to the task against the Chargers, but they still need to show some life on offense and possibly channel in a performance similar to their game against the Immaculata University Mighty Macs on Sept. 22, where they put up six goals in a dominant offensive performance.

The game against Lancaster Bible College will start at 1:00 p.m., as the Roadrunners will be continuing their journey to get back to .500 on the season.