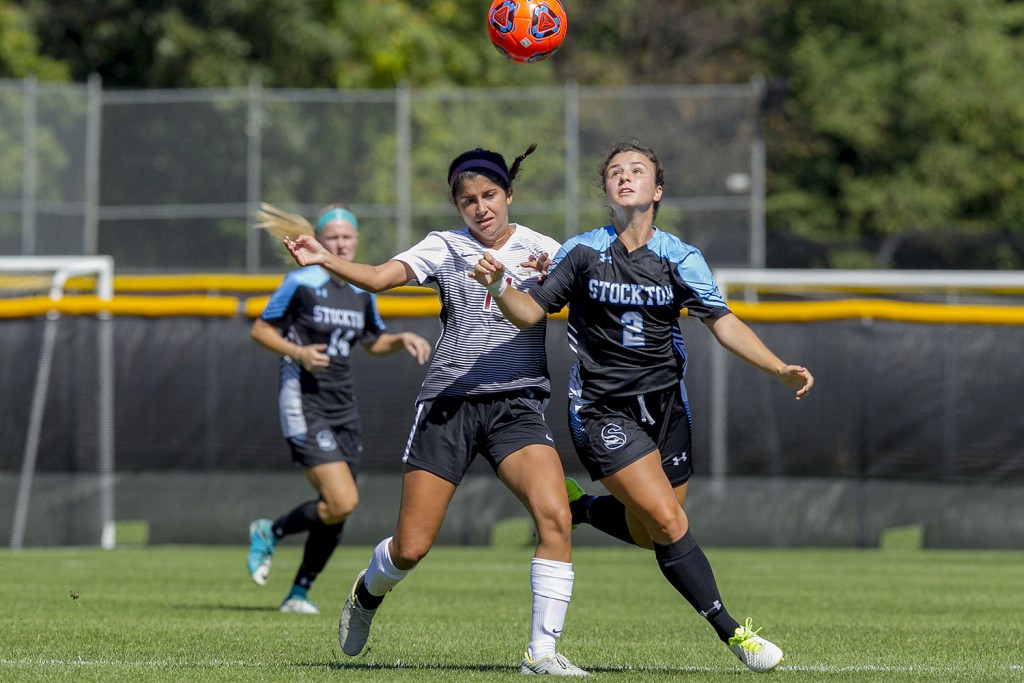 The Ramapo College women’s soccer team fell to the Montclair State University Redhawks in a close 1-0 game on Saturday. The game took place on the grass field of the Athletic Center in the midst of scattered rain showers at 1 p.m. Regardless of the damp weather, 110 fans still attended the event.

After a week of no action, RCNJ headed into Saturday’s game ready to improve their record. They were defeated a week prior at Stockton University 6-0, and were determined to not give up that many goals again.

The Roadrunners proved themselves defensively strong, and neither team got on the board in the high-intensity first half. After battling for almost an hour, the Redhawks scored in the 54th minute to go ahead 1-0. No other goals were seen, and that remained the final score.

Overall, Ramapo’s five shots were not enough to compete with MSU’s 23. In shots on goal, MSU also led 13-2. The Redhawks even had a 5-1 advantage in corner kicks.

Defensively, junior goalkeeper Elizabeth Harvell played a full 90-minute game and tallied a season-high ten saves. Defensive players Katie Gwiazdowki and Jaycee Sandberg each recorded a save as well, resulting in an overall of 12 saves for the Roadrunners.

Starting freshman Lauren Vladyka led the offense with two shots, including the first shot of the game in the 12th minute. Later in the second half, Vladyka’s second shot, which was also a shot on goal, was saved by MSU’s goalkeeper Lindsay Freewalt.

As a freshman, Vladyka recorded a season high of 76 minutes, resulting in 241 minutes of playing time already this season. After being asked how she likes Ramapo and her team so far, the forward simply replied, “Since the beginning, this team has always had a ‘family-first’ mentality.”

Just last year at Franklin High School in Somerset NJ, Vladyka received Honorable Mention and Coaches Award. Wearing #3 on the field, Lauren Vladyka will show as a valuable player for Ramapo in the years to come.

Also contributing offensively, team captain Gabrielle Gentilucci put out one shot on goal in the first half.

Following her, freshman Anna Downes took a shot that flew high, along with senior Jessica Raccioppi, who put out a wide shot to get Ramapo to their final total of five shots.

In the end, the Ramapo College Roadrunners fell at the hands of their conference opponents. Their overall record was bumped down to 2-9. Their NJAC conference record now stands 1-4.

The following RCNJ women’s soccer game was Wednesday, Oct. 10, at 7:30 p.m. The Roadrunners travelled down to Union, NJ, where they met the Kean University Cougars.

“After the hard work and fight we put up against MSU on Saturday, there is no doubt in my mind that if we come out with the same intensity against Kean, we will walk away with a win,” said Vladyka.

With a few days to recuperate, hopefully the Roadrunners will be fresh and ready to compete when they arrived in Union so they can secure a victory on the road.