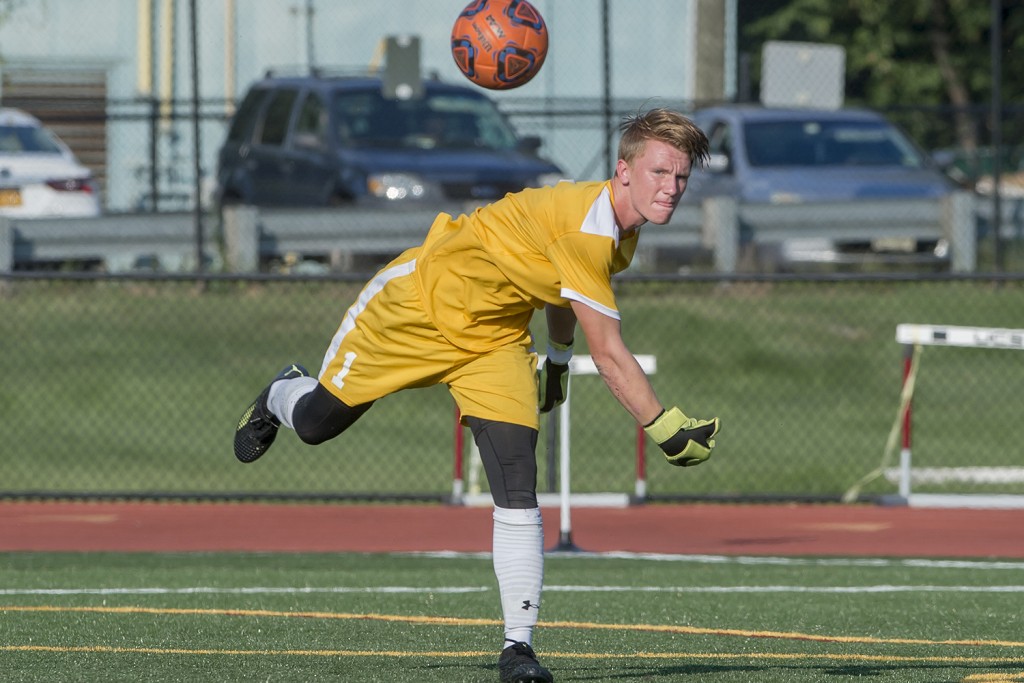 The Ramapo College men’s soccer team continued their unbelievable season after pitching their seventh shutout of this year with a 5-0 victory over Berkeley College. This win comes after a tough 0-2 loss against the Montclair State Redhawks and sees our Roadrunners improve to an 11-2 overall.

On a particularly cloudy day on the Athletic Center Turf Field –The Roadrunners looked locked and loaded, and they proved that strength early in the game.

While the Berkeley College Knights have struggled this season with a record of 3-8, the Roadrunners showed little mercy on both the defensive and offensive fronts.

Ramapo jumped on the board early into the first half when junior, Bashkim Saiti scored his first goal of the season off a 30-yard pass from fellow junior, Nick Petroziello to take a 1-0 lead.

A play that will surely go down as one of the best from the season — Saiti controlled the 30-yard bomb of a pass and proceeded to hit the upper 90 of the goal to put the Roadrunners on the board in the 11th minute.

Surprising enough, the rest of the half ended up being a defensive lockdown as both team’s offenses continued to struggle throughout the period. Going into halftime Ramapo was up 1-0.

It was clear from looking at both sidelines that both teams believed they still had a stake in the game. Despite being down, The Berkeley College Knights had carried some momentum in the half after fighting off Ramapo’s offensive barrage in the first period — but it wasn’t long before all that momentum was crushed.

The second half proved to be a much more one-sided-affair, with the Roadrunners dominating, and adding four goals to their lead. Freshman, Peter Livanis joined fellow teammate Saiti by scoring his first goal of the season only 10 minutes into the half.

Ramapo College junior, Guilherme DeNovaes flicked the ball to Livanis who beamed it into the back of the net to put the Roadrunners up 2-0. What seemed to be only moments later, Ramapo was awarded a penalty kick after a foul in the box and DeNovaes put the shot down with ease extending their lead to 3-0.

When all hope was beginning to flee, it was Ramapo College junior, and star-player, Joseph Fala who broke the backs of the Knights after scoring back-to-back goals. Fala’s first goal came minutes after Ramapo's last and earned fellow players Jorge Castro and Ariton Mimini the assists.

Fala then delivered a final blow — one that was likely unnecessary due to the commanding lead the team already held, but one that clearly put this game away. Off the score that was recorded in the 72nd minute of the game, Fala ended up collecting the 16th goal of his impressive season.

This goal extends Fala’s position as leading scorer on the team and solidifies an already remarkable shutout.

As the season begins to wind down the Roadrunners are staring at five more games before entering the NJAC Tournament — the first of those games will take place this Saturday on the Athletic Turf Field against the 11-3-1 Rutgers-Camden Scarlet Raptors.