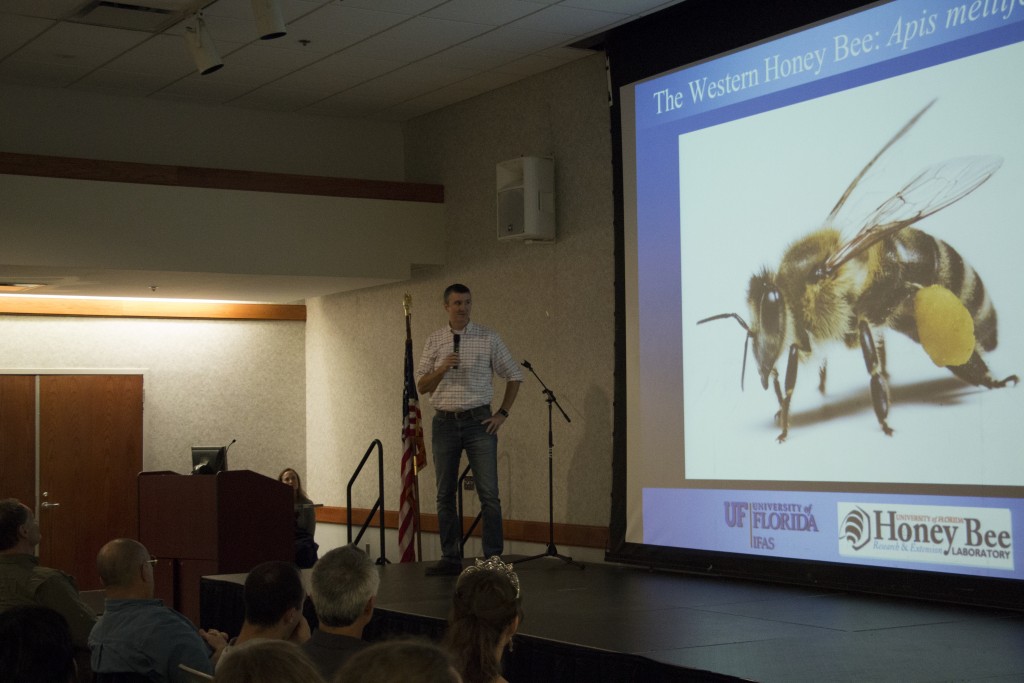 There’s been a lot of buzz about beekeeping in the past decade.

Ramapo College has a considerable beekeeper population and the RCNJ Beekeepers club offers a meeting space for students and staff who share a passion for the insects. Additionally, members of the College’s beekeeping group are also members of Northeast NJ Beekeepers, a nonprofit organization that, according to their website, "is dedicated to the promotion and support of all aspects of beekeeping in New Jersey."

Both the RCNJ Beekeepers and the Northeast NJ Beekeepers hosted a meeting last Friday that featured a lecture by Dr. Jamie Ellis, professor of entomology at the University of Florida.

Like bees to a flower, various bee enthusiasts flocked to Friends Hall to hear the entomologist speak on honeybee biodiversity and conservation. Well over 150 bee lovers young and old attended the event, many sporting themed apparel to express their passion.

Dr. Ellis' presentation focused on the decline of honey bee populations nationwide. He began by first explaining that there are nine species of honey bees in the world, but only one, Apis mellifera, has a natural distribution outside of Asia. Therefore, the Apis mellifera was the honey bee his talk centered on.

“This is the bee that you gave up your Friday night to talk about,” he said.

He went on to discuss the honey bee’s function and what honey bees are good for. While honey bees don’t function for humans, around 20 percent of a person’s diet is dependent on honey bee pollination, explained Dr. Ellis.

To demonstrate the honey bee’s importance, he had had the audience envision a standard McDonald’s cheeseburger if there were no honey bees. He explained that honey bees are responsible for the onions, mustard, meat, pickles, tomato and cheese.

“The only thing we know we have without bees is the two buns,” said Dr. Ellis.

Due to the importance of honey bees, the thought of losing them is concerning. The media often portrays honey bees as dying off. Dr. Ellis explained, though, that the situation is more complicated than that: There has actually been a net gain of 1.3 percent in honey bee colonies due to the amount of money going into beekeeping.

What beekeepers need to be concerned about, though, is gross loss. Dr. Ellis stated that even though the number of honey bee colonies have increased in terms of net gain, there is a 30 percent gross loss in honey bees, and this is what he addressed in the remainder of his lecture.

Dr. Ellis then discussed the five killers of honey bees, which are “varroa, quality queens, nutrition, weak in fall and weather.” He believes, though, that weather is beyond beekeepers’ control and that bees being weak in fall really depends on how beekeepers manager the other killers. Therefore, Dr. Ellis mainly focused on varroa, queens and nutrition.

He first discussed varroa, which he described as, “the number one killer of honey bees on the planet.” Varroa are tiny parasites, and varroa mites often can infect honey bee colonies. Dr. Ellis explained that if beekeepers do not address varroa, their bees will die.

He then directed beekeepers to the website Honey Bee Health Coalition to help them tackle varroa.

He then discussed queens, which he admitted is difficult to address.

“You don’t know if you have a quality queen until it’s too late,” said Dr. Ellis, stating that a queen’s quality is only measurable after seeing how much honey production was done, and by that point it is already too late.

“There’s a huge realm of scholarship waiting to happen in the world of queen research,” he said. “Right now, we manage queens by simply having them in there.”

He then addressed nutrition, believing that it is the easiest killer to manage, as it relies on good education. He explained that the reason honey bees die at the hands of starvation is that people do not understand how to recognize signs of nutrient deficiencies in their colonies, stating, “We as educators have to do better.”

“Queens, nutrition and then varroa,” said Dr. Ellis. “We have got to work on these three things, and then everything else will sort itself out.”