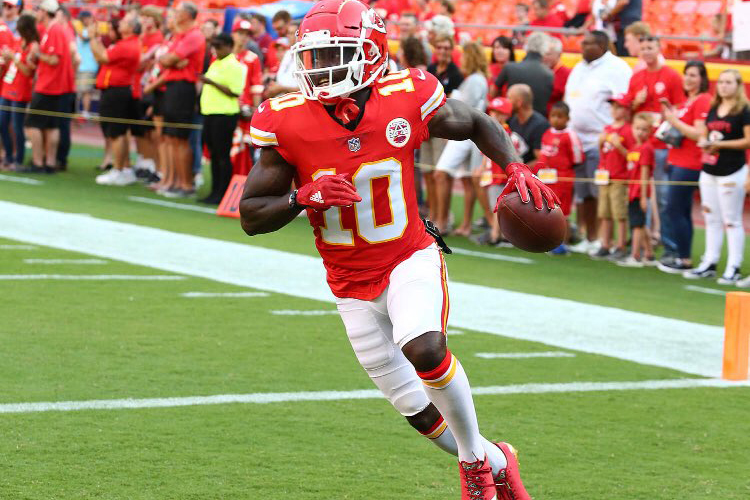 During a Sunday Night Football matchup between the Kansas City Chiefs and New England Patriots where the Patriots won 43-40, there was controversy because a Patriots fan threw a beer at Chiefs wide receiver Tyreek Hill after scoring a touchdown.

After the 75-yard touchdown wooed the thousands of fans in attendance, Hill went to the back of the end zone to celebrate with his teammates and the fan doused him with beer.

It seemingly went unnoticed during the broadcast, but after the game, the fan was at the forefront of all sports media channels as videos surfaced of him on social media.

After the game had ended, the Patriots finally identified the man, banned him from Foxborough Stadium for life and forwarded his information to the police. The Foxborough Police Department then charged the man with disorderly conduct and throwing an object at a sporting event.

"My coach [Andy Reid] told me, 'Don't get emotional. Don't get mad about it, because it comes with the territory,'" Hill said, according to Boston.com. "I'm not mad at all."

On Monday, Hill's agent, Drew Rosenhaus, said he talked to the NFL and NFLPA about their legal options.

"That type of behavior is unacceptable," Rosenhaus said. "Players have to be protected. We want that fan to be prosecuted."

Rosenhaus is correct; players need to be protected from fans who clearly can’t control themselves at football games.

This isn’t the first time this has happened either. Seattle Seahawks defensive tackle Quinton Jefferson was leaving the field after being ejected against the Jacksonville Jaguars and had beer thrown on him by a fan in the stands.

After confronting the fan, Jefferson had another beverage thrown on him in addition to a bag of popcorn, where he then proceeded to try to enter the stands and challenge the fan face-to-face.

While security was able to hold him back and he left the field, the Jaguars took action after the game by banning the four fans involved, but no criminal charges came from it.

While it’s great that teams are taking action by banning fans, more needs to be done in order to protect these players from the people who decide it’s a good idea to treat them like animals.

Sure, a bag of popcorn and a little cold water isn’t going to hurt anybody, but they are human beings like the rest of us and deserve to be treated as such.

Teams need to beef up security at these games to ensure that they can get a grip on these kinds of instances. It’s clear that fans don’t care if they’re banned, but if there is legitimate security in the area, they’ll think twice about it because they would be arrested and jailed if officers noticed.

With recent criminal charges stemming from the Hill incident, I doubt we’ll see any kind of situation like this again for the foreseeable future. However, history repeats itself and another player will likely have to face a similar encounter because teams won’t step up and pay for more security.