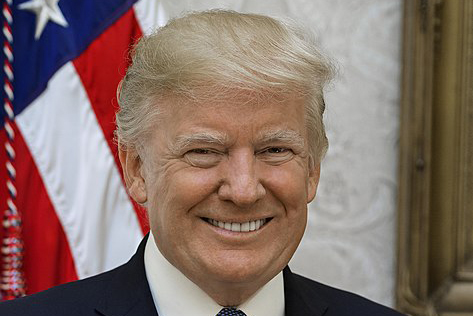 During a rally in Montana, President Donald Trump spent most of the time making sure that his crowd and supporters were going to vote Republican in the upcoming midterm elections, but in doing so, he also decided to take another shot at reporters and journalists.

President Trump urged the crowd to vote for Rep. Greg Gianforte, a man who was sentenced to anger management classes and community service after he assaulted reporter Ben Jacobs last spring, and Trump made a joke to “never wrestle him.”

Not only did Trump say that he had heard that Gianforte body slammed a reporter, he said he was concerned Gianforte would lose his seat last year and that the body slam helped him win the election.

“I was in Rome with a lot of the leaders from other countries talking about all sorts of things and I heard about it, and we endorsed Greg very early, but I heard that he had body slammed a reporter,” Trump said.

“And he was way up, and he was up, and this was like the day of the election or just before, and I said, ‘Oh, this is terrible, he is going to lose the election, and then I said, ‘Well, wait a minute, I know Montana pretty well, I think it might help him. And it did.’”

He then decided, instead of saying it was wrong, to make another joke.

“Anybody that can do a body-slam,” the president added, “that’s my kind of guy.”

Trump, who has consistently labeled reporters as the enemy, pretty much condoned the attack on Jacobs while offering no sympathy for him. He didn’t even denounce it, and he went as far as to make a body-slam motion during the rally.

This came at a time when Jamal Khashoggi, a dissident Saudi journalist and columnist for The Washington Post, disappeared, and Trump has done little in his defense. He has had a soft stance, and even though he has said that Saudi Arabia’s story has “lies,” he’s done nothing to punish them.

His lack of protection for our journalists is scary, but him condoning the attack of Jacobs makes it not surprising.

“To celebrate an attack on a journalist who was simply doing his job is an attack on the First Amendment by someone who has taken an oath to defend it,” said John Mulholland, the editor of The Guardian U.S. “In the aftermath of the murder of Jamal Khashoggi, it runs the risk of inviting other assaults on journalists both here and across the world where they often face far greater threats.”

Mulholland is absolutely right. Trump is showing the world that it is okay to attack journalists with no repercussions, and in foreign places where journalists are not allowed to speak freely whatsoever, this could prove costly, or even deadly.

It’s absolutely unacceptable that the man in charge of the country is allowing people who are just doing their jobs to get hurt and killed. At a time where journalists are needed more than ever, they’re now risking their lives every time they go out to do a story because our president won’t step up to the plate for them.