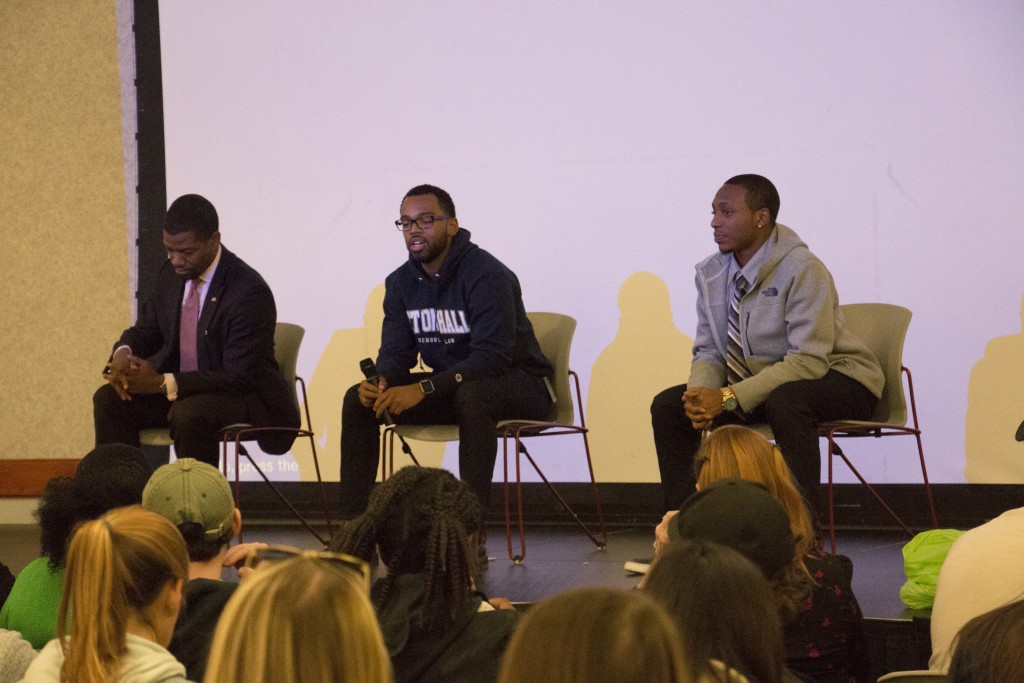 Researchers from Seton Hall University Law School visited Ramapo last Thursday to present their findings on racial profiling at traffic stops in Bloomfield, New Jersey. Aside from discussing these findings, the three speakers shared their personal experiences with police as black men while on the road.

The presentation began with background information of the study by Mark Denbeaux, who led the graduate law students in their research. Through 70 hours of observing municipal court hearings, they discovered that although Bloomfield’s residents are 60 percent white, 78 percent of court appearances were black and Latino. Additionally, the majority of tickets were issued in the southern section of the town, which is bordered by East Orange and Newark.

Paul Reck, an assisstant professor of sociology at the College, helped organize the event. He felt it was important for the “Ramapo College community to have exposure to a recent, well-conceived, well-conducted study that clearly and methodically demonstrates police targeting of black men right here in our own backyard.”

Before hearing the speakers’ stories, the audience viewed a documentary video made by Vice News in 2016, the year the study was published. It featured some anecdotal evidence of traffic stops against black men in Bloomfield, and presented the research findings from the Seton Hall students which seemed to support the stories told.

Each panelist gave an account of the familiar story – getting stopped by police officers seemingly for no legitimate reason, and the tense interactions that ensued.

The first speaker was Tevin Bell, a Bloomfield resident who shared that he endured countless stops and tickets throughout the years he attended Bloomfield College. One night when driving home friends from a local bar, he received eight successive tickets on the drive back to campus and had his car searched for marijuana. Bell often felt the pressure of deciding between attending classes and taking his exams or arguing these fines in court.

The next speaker was Marquis Whitney, one of the law students who conducted research and was featured in the Vice video. They constructed a driving experiment in the documentary to see if a beaten-up rental car with a black male driver and passenger would get stopped in Bloomfield.

They did; the officer explained the reason for this was that a hooded jacket blocked the rear windshield. At the event, Marquis elaborated by explaining the jacket was being worn by a producer in the back seat.

The final panelist was Jason Castle, a researcher and former councilman in Teaneck, New Jersey. He said he got involved in the study because he wanted to know if the fear and trepidation he felt was legitimate and not simply anecdotal.

Castle shared an encounter he had with police on the road which prompted his strong feelings. Driving home from work at Apple in a recently purchased Audi shortly after moving to Teaneck, Castle pulled over because he got lost. He ended up being confronted by a police officer and was arrested after refusing to undergo a breath test.

Castle felt frustrated that although he was educated enough to know what not to do in a traffic stop like his, he was still victimized.

It is often cited that the reason for ongoing racially based issues like these is a lack of empathy in those who do not have to experience this treatment. That is especially relevant in bringing this event to Ramapo.

Professor Reck stated, “As a predominantly white institution with many students coming from largely white, segregated, insular communities in northern New Jersey, Ramapo College provides students with few opportunities to develop an empathetic understanding of what many Black men routinely go through in encounters with law enforcement.”

Castle commented that the lack of empathy being shown is, in his opinion, an inability to articulate sympathy for the struggles of minorities who are disproportionately targeted.

However, there is value in bringing these stories to the Ramapo community in order to humanize the issue of racial profiling, according to Reck.

Students were able to hear firsthand the accounts people of color which they may not make an effort to hear. “We saw this event as a step in the right direction of addressing the underrepresentation of Black people and their experiences at Ramapo College,” Reck said.