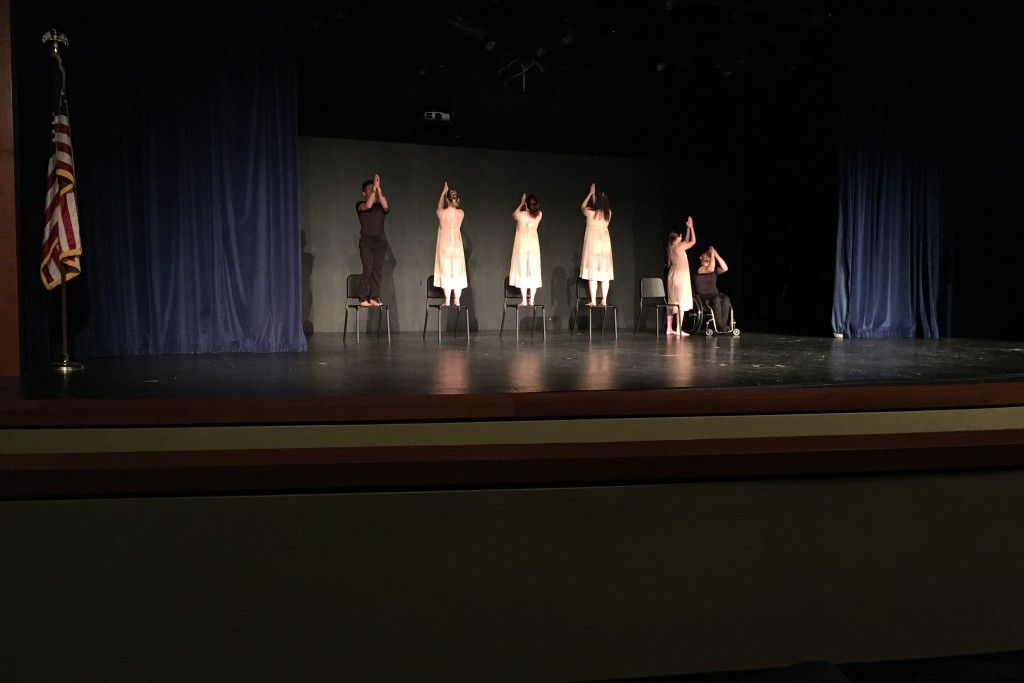 The Marked Dance Project put on a moving performance at the closing ceremony of Ramapo’s Queer and Trans History Month and Disability Awareness Month ceremony.

The Marked Dance Project features performers with and without disabilities, and was created in 2009 by Mark Travis Rivera, who identifies as gay, disabled and gender non-conforming.

The award-winning activist’s performance, called “The Weight,” featured two men, one with cerebral palsy who was in a wheelchair, and four women.

“We want to celebrate this month by having Marked Dance Project perform,” Cuddeback said, “They have performed in Silk City and NYU.” She also shared that Rivera has had poetry published in the Star Ledger and the Bergen Record.

Rivera thanked Cuddeback for the introduction, as well as the Women’s Center and Ramapo College for having him there.

“I want you [the audience] to think of the intersections of disability, race, sexuality and gender,” he said. “You may see my gender presentation, but you cannot see my disability.”

Rivera has cerebral palsy and noted that, “Society says dance is not meant for disabled people.”

However, he views his company as an opportunity to see what integrated dance is like.

He urged the audience as they watched the piece to think about the aesthetic, the movement and sensuality of it.

The dance was very moving, with the overlay of Virginia Woolf’s suicide note backed to slow, melancholy music. The dance looked well-practiced and effortless.

There was a question-and-answer session at the end of the performance, where students were able to ask the dancers and Rivera about what inspired the dance.

The choreography was previously completed to the dancers taking part in the performance, which allowed the dancers to investigate different types of relationships that existed within the dance.

“I took it as more of a literal scene,” said dancer Caitlin Knowles, regarding the interpretation of what the dance is meant to represent. “It’s more of a suicide note, and I thought about the support network you have and the reasons that go with [suicide].”

Dancer Peter Trojic also mentioned the importance of movement – understanding how the wheelchair he uses moves and the depth it adds to the performance.

“My love of joining Mark’s company is the representation,” said Trojic. “My issue was that I couldn’t be a dancer because I’m disabled, and there’s a difference between people since they were three and that I’ve been training for three years.”

Rivera picked the choreography that was inspired by moments of waiting, these moments in life where someone is waiting for something drastic to happen, to change.

“We are so close to each other, without even realizing it,” he said.