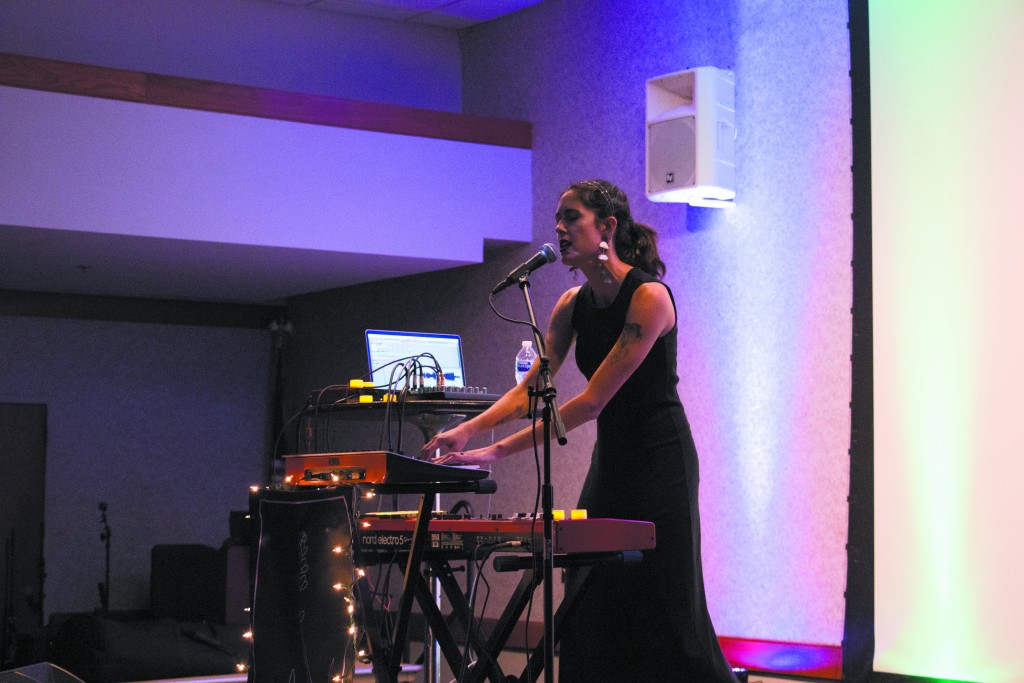 Electronic pop musician Half Waif performed a solo show at CPB’s Tuesday Night Live along with the opening Montclair band Hodera. Half-Waif’s emotional synth compositions are usually accompanied by drums and bass, but this show marked the beginning of her first solo tour.

Hailing from the Hudson Valley area, Half Waif said she enjoyed the drive to Ramapo and excitedly thought of TNL as a warm-up show to kick off her tour.

“I have heard of Ramapo before, and I drive by the exit for Mahwah all the time because I live in upstate New York and do that drive all the time, so I was excited when I actually got to come here,” she said.

Relying on only synth keyboards and the soft tumble of electronic drums, Half Waif, formally known as Nandi Rose Plunkett, performed many songs off her most recent album “Lavender.”

Her music is characterized by rich, soothing vocals, while her instrumentals are buoyant and vibrant.

Taking inspiration from singers like Joni Mitchell — whose photo is the screensaver on her iPhone — and Bjork, along with younger musicians like Julien Baker and Mitski, she feels a chilling vocal performance is anchored in emotion. “I think that’s the line I want to tow is like you can feel the control yet you’re emoting really intensely.”

Between songs in her performance, she explained that this was her first show executed entirely solo — she packed up her equipment, drove herself to the gig and was not accompanied by merch helpers.

“I’m kind of a control freak so part of me is happy to be in control of every element, but it’s not to say I prefer one over the other,” she said. “But playing solo I feel very strong, I feel like it’s given me a renewed sense of confidence and it’s also allowed me to be really human.”

Upon seeing her perform, people may not realize this is one of her first solo shows. Both on stage and in person, she is honest and at ease, often dancing during instrumental breaks and removing the microphone to visit different parts of the stage.

During her performance, Half Waif acknowledged the balanced sound quality throughout Friends Hall. Junior Gwen Manley-Muller, a music studies major and avid Ramapo concert goer made note of this as well. “The sound mixing has improved from past performances, which is always super important at shows.”

Although Half Waif and the opening rock band Hodera embody two different genres, both artists connect with their fans through gripping lyrics and ability to put emotions into words.

“I love their music—they can go from like soft and emotional to just jamming out and rocking, so they’re pretty eclectic in that way,” said Rachel Lubitz, who graduated from Ramapo in the spring. She saw the band perform a year ago in New Brunswick and visited Ramapo to catch the band a second time around.