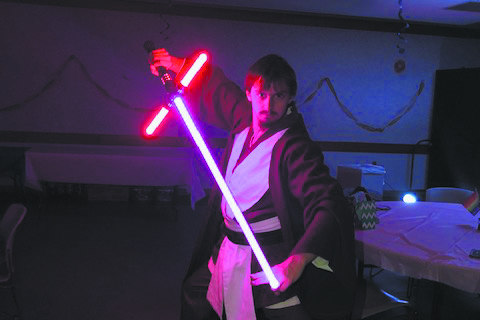 With guys dressed as Princess Peach and many proudly wearing LGBTQ+ inspired clothing, Ramapo College’s Gender Bender dance and costume ball quickly became a haven for students looking to express themselves with their unique costumes – all in time for Halloween night.

Hosted by the Women Center in Friends Hall and co-sponsored by the College Programming Board (CPB), WRPR Radio, Association of Latinos Moving Ahead (ALMA) and Brothers Making a Difference (BMAD), Gender Bender served as a Halloween party bash that brought together several different groups on campus. Students could comfortably gender bend or dress up in whatever type of costume they pleased; the Gender Bender was a safe environment for anyone looking to ignore gender binaries while having a fun time.

Senior and health and wellness coordinator of the Women’s Center, Regina Cuddeback, the head of the event, commented on the success of the bash.

“This is our second year doing the event, and it’s a good time to let students play with gender expression,” said Cuddeback. “It’s very important that we represent everyone and it’s equally important for people to express themselves.”

Students were dressed in an array of distinct costumes ranging from Bob Ross equipped with a full paint palette of colors, to two girls dressed in an eerie rendition of the ghosts from the film “Spirited Away.” From the spooky to the comedic costume wearers, all were lined up to take pictures with their friends.

Danny Vazquez, the treasurer of ALMA, decided not to partake in wearing a costume for the event, but had a great appreciation for those choosing to take part in the time-honored tradition.

“We’ve never done this before, but it’s pretty cool because people get to dress up and express themselves,” said Vazquez.

Elation couldn’t begin to describe the excitement of the faces of people dressed in costumes that clearly had extensive time and detail poured into them. Natalie Martinez, one of the girls dressed as half of the “Spirited Away” couple, described the environment best:

“Our costumes were something that we always wanted to do, and we did it in a safe place to be around.”