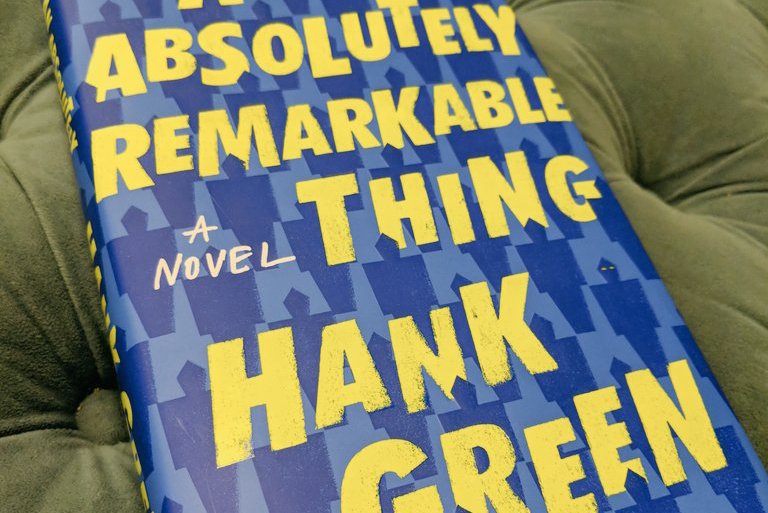 Hank Green is one of the internet’s most notable celebrities, running a number of YouTube channels with his brother, John Green. If that name sounds familiar, that is because John Green is one of the biggest names in the young adult literature genre, writing such works as “Looking for Alaska,” “Paper Towns” and “The Fault in Our Stars.” Now Hank’s turn in the spotlight has come with his debut novel, “An Absolutely Remarkable Thing.”

This title is appropriate, because with its out-of-this-world plot, relatable characters and powerful message, Hank Green does an amazing job at setting himself apart from his brother’s literary success and establishing himself as an author worthy of praise.

The book follows April May, a 23-year-old graphic designer who, upon finding a giant robot she names Carl, films its discovery with her friend Andy. The video she releases immediately gains popularity, elevating her and her friends to superstardom. Now with the discovery that there are different Carls located all over the world, it is up to April and her friends to uncover what the Carls are and the reason for them coming to Earth.

The science-fiction influences in the plot are a welcome addition to the otherwise traditional narrative of an average person becoming an overnight success, and it makes the story pleasantly unpredictable. Readers will never find the book to be dull, continuously being surprised at what happens next and being more than happy to be along for the ride.

Green also finds success with creating a likable protagonist in the form of April May. She shows herself to be snarky, but she also has a good heart, wanting to use the power of her new platform to make a better impact on the world. Her character is relatable enough for her to be a self-insert for some.

However, a main character is only as good as the people around her. Luckily, April is surrounded by plenty of memorable people, from her quirky best friend Andy Skampt, to her realist girlfriend Maya, to the conservative figure she clashes with, Peter Petrawicki. Each character feels vital to the story, serving a purpose to advance both the plot and April’s character development. No one person feels forgettable and people will remember their names long after they finish the last page.

While all of its storytelling merits are of great note, what really propels “An Absolutely Remarkable Thing” into greatness is its exploration of modern fame. Hank Green knows what it is like to suddenly be given a platform, given his success on YouTube with his brother back in 2007. He uses this knowledge to show his readers all that comes with overnight success: the good, the bad, the harsh truth and even the hope that comes with it.

For some, the book can feel more like a character study than a science-fiction novel, which is not a bad thing at all. In his author’s note, Green states, “This story is, in part, an attempt to help me realize the weight of my influence and to ask myself why I am so unable to control it…Hopefully, we’ll all figure it out before it tears apart our world.” Given the digital era and the rise of internet “influencers,” Green does an impressive job at showing what becoming famous on social media can really mean.

“An Absolutely Remarkable Thing” is an impressive debut from a man who already has great success in other fields. The plot feels unique, the characters are all memorable and it provides a necessary statement on what fame has become in the 21st century. With “An Absolutely Remarkable Thing” becoming a commercial success, readers can only look forward to the other absolutely remarkable things Green comes up with in the future.