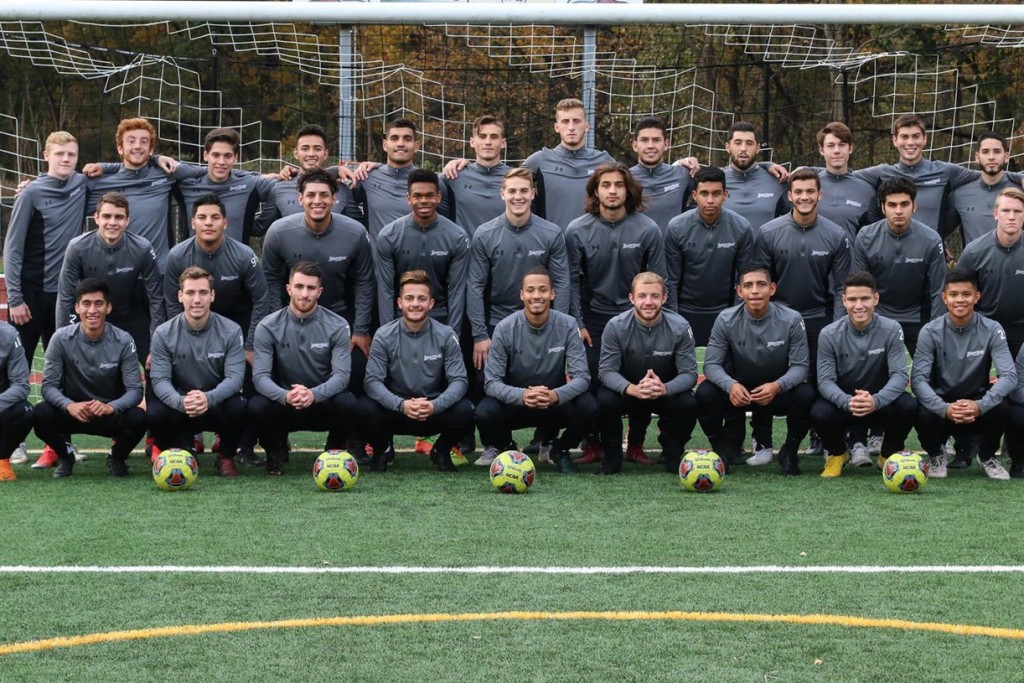 The Ramapo College men’s soccer team fell to the Montclair State University Red Hawks, 5-0, in the final game of the NJAC tournament this past Friday night at the MSU Soccer Park at Pittser Field.

The loss ended RCNJ’s four-game winning streak, and brought their overall record down to 15-3-2. Two out of three of those Ramapo defeats were at the hands of the No. 1 seeded Red Hawks.

Under the Friday night lights, 1,439 excited fans gathered to watch Ramapo begin quickly on offense in the first half with an immediate wide shot put out by senior Edward Franzoni in the second minute.

The Roadrunners continued to fight, and lasted an additional 28 minutes until the Red Hawks collected their first goal at 29:47. Neither team scored for the rest of the first half and MSU led in shots, 10-5 at halftime.

The Red Hawks quickly stole a goal within the first minute of the second half, making the score 2-0. From there, MSU persisted with three additional goals, the last being a penalty kick, leaving the final score at 5-0. Despite the end result, the Roadrunners continued to battle and only slightly trailed behind in shots, 12-11 for the half.

A series of cautions were distributed as the aggression and frustration of the game unfolded. RCNJ received five yellow cards within seven minutes at the tail end of the second half. MSU was given three during the game.

Sophomore goalkeeper Joshua Schaffer played a full 90 minutes where he faced 21 shots and tallied a season high of eight saves for the game.

In the end, Ramapo’s 16 shots were just not enough for Montclair’s 22. MSU also led in shots on goal, posting 13 to Ramapo’s four. For the game, MSU collected a total of four corner kicks, while RCNJ received only one.

While the game does grant Montclair the league’s automatic bid to the NCAA Tournament, Ramapo is not automatically eliminated. Currently, RCNJ stands with a No. 2 ranking status in the NCAA South Atlantic Regional Poll, while Montclair stands at No. 1.

The Roadrunners do stand a chance, since it was recently announced that they were in fact gifted a NCAA at-large bid. There was an NCAA Selection Show on Monday, and the final 62 team bracket was posted on NCAA’s official website.

Ramapo received one of the 19 Pool C at-large berths, and now advance to the first round of the tournament.

Continuing to make program history, this will be the Ramapo College men’s soccer team’s second appearance in the NCAA Tournament, the last one being 1997.

This year’s team also tallied the most wins, being 15 in a season, under 15th year Head Coach DJ Pinton’s tenure, and are only one victory away from matching the school record of 16 wins in a season.

The Roadrunners are traveling to their first site this weekend, Connecticut College, where they will take on Springfield College (14-4-1) Saturday Nov. 10 at 1:30 p.m. in the first round. Simultaneously, Connecticut College will face off against Thomas College that morning at 11 a.m.

The victors will move on to round two of the NCAA Tournament, and play for their ticket into round three on Sunday Nov. 11. The stakes couldn’t be higher for Ramapo this weekend.