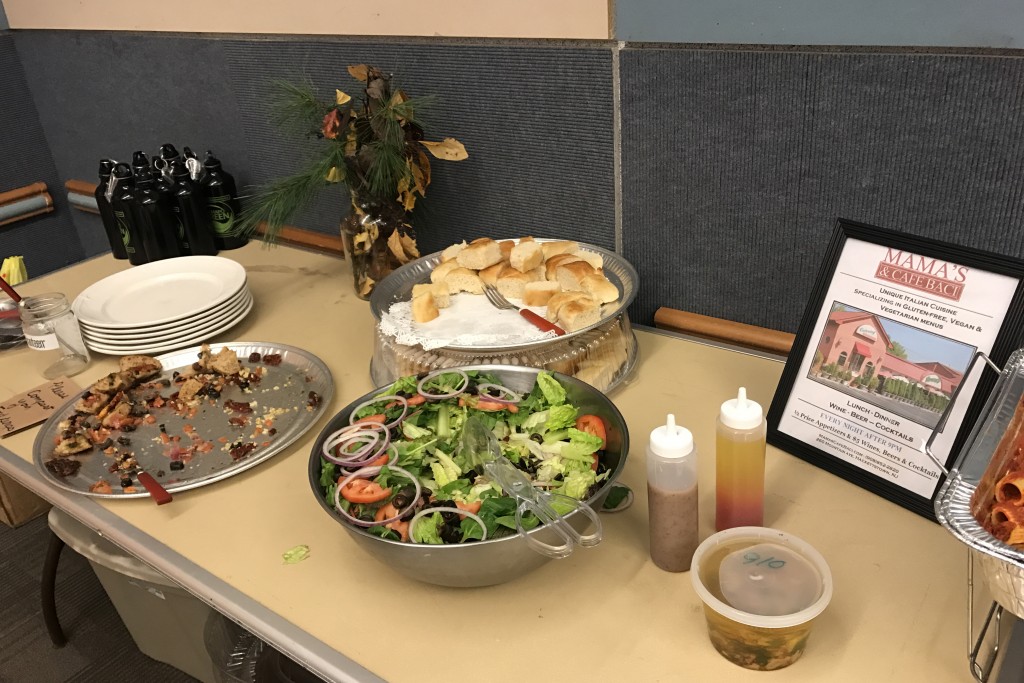 To help promote a more environmentally conscious holiday, Ramapo’s 1STEP (Students Together for Environmental Progress) club held their annual Sustainable Thanksgiving dinner this past Wednesday, complete with a plant-based feast and plenty of friends.

Sustainable Thanksgiving is a yearly event that 1STEP holds to educate students on their consumption and how it impacts the planet. The feast is composed entirely of a vegan menu, and students are encouraged to bring their own utensils and reusable food containers to make the event as zero-waste as possible.

“It’s our way of promoting veganism and zero-waste, and just get people together to eat a meal together,” said Eileen “Beans” McCafferty, senior environmental studies student and president of 1STEP.

Junior Lily Makhlouf, the vice president of 1STEP, was also instrumental in orchestrating Sustainable Thanksgiving 2018. Makhlouf explained that she began planning for the event a month ago, making the food arrangements and collaborating with various clubs on campus to make it a fun and educational event.

Both Garden Club and Beekeeping Club members were there, as well as Yoga Club, whose members were holding a brief session. Mindfulness Club was also a co-sponsor for the event this Thanksgiving, and they organized a labyrinth meditation for guests to participate in.

“This year we’re having a mindfulness background to Sustainable Thanksgiving,” said Makhlouf. “You know being mindful of what you’re eating and where it is coming from.”

Makhlouf explained that eating a plant-based diet is one of the ways in which students can be more sustainable this Thanksgiving. Celebrating Turkey Day minus the turkey may sound unorthodox, but meat consumption is linked to various environmental concerns, such as global warming, water pollution and deforestation.

“You're saving turkey’s lives, which is step one, but that’s looking at it from a small picture,” said Eric Williams, junior and media coordinator of 1STEP. “By eating a vegan diet, you’re consuming less resources, less water and less cruelty. You’re basically just lessening your environmental footprint.”

Sustainability goes beyond diet. Food waste is a major environmental concern: The United States Department of Agriculture reported that in Americans waste 30-40 percent of their food and food waste has “far-reaching impacts on food security, resource conservation and climate change.

“That’s a lot of what goes into Thanksgiving. We sometimes don’t realize how fortunate we are and just throw food away,” said Makhlouf.

Students, therefore, came equipped with their reusable food containers and utensils so that if they were not able to finish their plates, they could take it home for later. Plates and utensils were still there for guests who forgot to bring their own containers. They were encouraged, though, to be conscious of the amount that they took and be sure to compost anything that they could not finish into the compost bin that the event provided.

“A lot of what [sustainability] is just your consumption choices. If you want to be sustainable you have to think about the choices you make,” said McCafferty. “Sometimes its hard, but it’s 100 percent doable.”