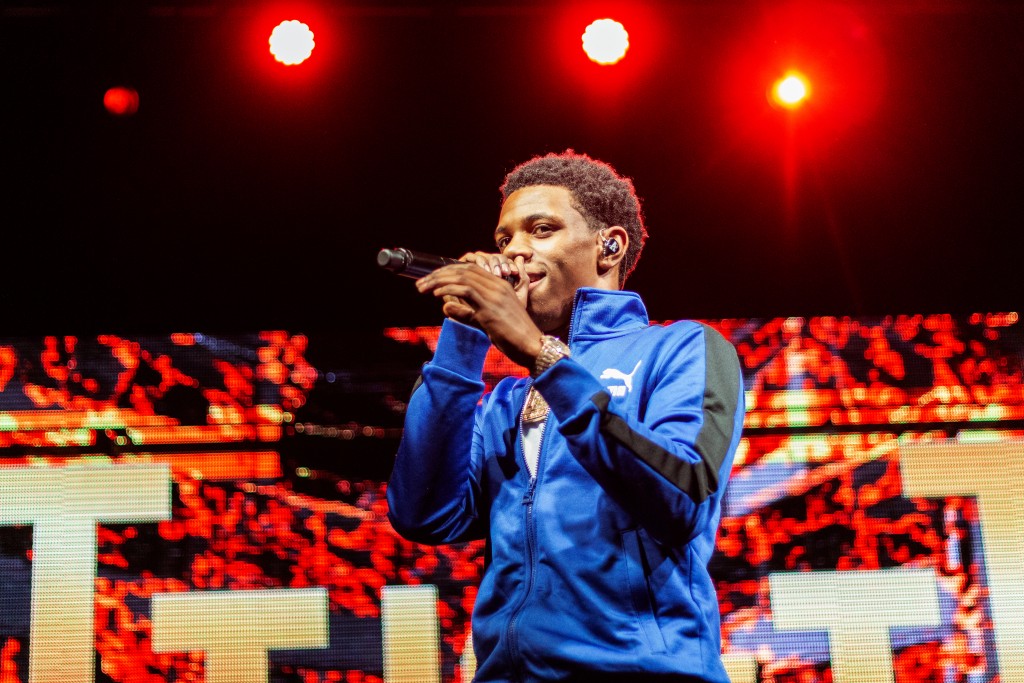 This year’s sold-out fall concert co-sponsored by the Student Government Association and the College Programming Board featured hip-hop artist A Boogie wit da Hoodie. Before A Boogie took the stage of the Bradley Center, student rapper Omietté, a junior music production-industry major, opened the show performing his original music.

Omietté auditioned for the opening concert slot at a CPB open mic night, and from there he advanced to a final round of private auditions. His performance career transformed in one night, as his largest audience went from 100 people at a Brooklyn bar to a main stage Bradley Center spotlight opening for a platinum recording artist.

“It was overwhelming, I was a little nervous walking up to the mic, but the energy from the crowd quickly helped me overcome the nerves,” he said. “I had a life changing experience that I’m grateful for.”

On stage A Boogie was accompanied by his official tour DJ Ominaya, who carried concert banter and boasted A Boogie’s musical accomplishments to the crowd, praising his certified platinum status for hit songs like “Drowning” and “My Shit” and scoring features with major artists like Chris Brown and Maroon 5.

The 22-year-old’s songs about money, luxury products and relationships were very popular among the college crowd, who flared their phones in the air at the first sight of him. During his hour-long set, he performed songs off past albums and mixtapes like "Artist" and “International Artist," but also teased new songs from his soon to be released album “Artist 2.”

“A Boogie is the best rapper. We voted for him and we got what we deserved, so I really appreciate Ramapo for really working with him because it was the best show ever,” said sophomore Joyce Boahen, who had been star-struck after holding eye contact with the rapper.

“This is a guy who's been on the Billboard charts and all that, so it’s pretty cool he performed here,” she said.

SGA and CPB have been planning the concert since mid-July, and announced A Boogie as the headliner at the involvement fair earlier in the semester to an enthusiastic crowd of students.

Following the announcement, lines at Roadrunner Central wrapped around the bookstore, selling out in only one week.

Over the summer, students had the opportunity to vote for the fall concert’s headliner through a survey link available through social media with five different artists to choose from. SGA President Stephan Lally said this year’s voting poll offered specific artists rather than genres like past surveys.

“The first-year population comprised a lot of our correspondence as well as current students,” said Lally. “So pretty much everyone who is on this campus now had an opportunity to vote for the artist.”

Lally credits the major success of the fall concert to the many student volunteers who helped set up the stage and sound equipment on the day of the concert. “It was an all-around student effort…It’s something to feel proud of if you’re in SGA or CPB,” Lally said.

Following last semester’s lackluster response to the spring concert, this sold-out show drew over 1,000 people to the Bradley Center. Utilizing a larger budget during the fall semester, Lally said the CPB and SGA had top-tier performers to select from for this concert.

“We probably couldn’t do this every year but it’s something to look forward to…I think it can encourage more students to get involved because that’s where it comes from — CPB and SGA are two organizations that are all volunteer-based.”