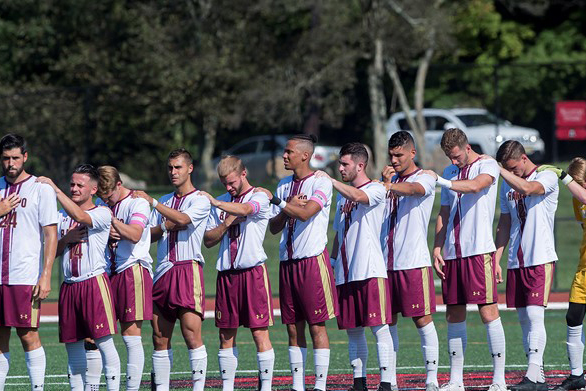 The Ramapo College men’s soccer team closed out their historic season with a 3-0 loss against Montclair State University in the sectional round of the NCAA Tournament on Nov. 17.

Heading into sectionals with only three loses, with two of them coming at the hands of the MSU Red Hawks, RCNJ knew they had their work cut out for them. The two qualified teams faced off at Tufts University in Massachusetts.

Ramapo gave up a penalty kick in the 32nd minute of the first half (31:16), resulting in Montclair taking the lead, 1-0. The score stuck 1-0 for the remainder of the first half, where RCNJ led in shots, posting eight to MSU’s six.

In the second half, the Red Hawks extended their lead by scoring two additional goals at 68:16 and 84:56, bumping the lead up to 3-0 where it would stay. Despite the final score, the Roadrunners persisted the entire game and gave their conference rival a high intensity battle.

For the game, senior Trevor Albrecht closed out his college career with four shots on goal, all of which were saved by Red Hawk goalie, Mike Saalfrank. Junior Joseph Fala also recorded four shots which were blocked by defenders.

Senior Jorge Castro contributed three shots to his fellow Roadrunners for his final game, one being a shot on goal. Other shooters for RCNJ included Justin Charkowski, Eduardo Reyes and Chris Nash, each collecting one shot apiece.

The Ramapo College goalkeeper Joshua Schaffer tallied six saves after a full 90 minutes in the net. The sophomore wrapped up his second year with the Roadrunners by collecting a total of 101 saves for the season.

For the year, the Roadrunners wrapped up their season with a historic record of 17-4-2 during head coach, DJ Pinton’s, 15th season. Interestingly enough, Pinton was first a player for RCNJ himself, then became an alum, which led him to becoming an assistant to the program up until he was offered the head coaching position.

It’s also important to mention that Pinton is considered to be one of the top soccer players to ever represent RCNJ. He received many awards, mentions and honors for his impeccable talent showcased on the pitch. A few of these honors included 1997 Ramapo College Athlete of the Year as well as being inducted into the Ramapo College Athletic Hall of Fame in 2006. This year’s team record is just another accomplishment for Pinton.

Another huge contribution to the 2018 men’s soccer team was junior Joseph Fala; the season would not have played out the way it did without his hard work. The forward really stepped it up for his third year after only scoring a combined five goals in his first two seasons. This past year, Fala led the team with a whopping total of 27 goals for the season. In 2018 alone, he tallied 53 more points than he did the year prior, ending with 61 for the season.

He was simply unstoppable. Fala kicked off his dominating streak in the first game against Rosemont College.  He recorded an immediate three goals to secure RCNJ’s first victory, 3-1.

After his hot start, Fala just continued to show up and compete against these teams with amazing footwork and undeniable aggression. Fala is currently second in the NCAA Division III total goals category with a solid 27 goals on his record for the year.

Earlier in the season during certain select weeks, Fala actually led first in the NCAA Division I and II total goals categories. At those times, he proved to be the best in his own division and in the more advanced divisions, which was great publicity for Fala as a player and representation of Ramapo College as a whole.

Ultimately, the Ramapo College men’s soccer team really defied all odds this year. First off, they concluded the season with the best record in the program’s entire history. They exceeded the school’s original record for most wins in a season (the record being 16) after their victory against Springfield College.

In the end, RCNJ finished second in the NJAC conference after they were predicted to finish ninth in a preseason poll. They earned the No. 2 seed in the conference tournament and advanced all the way to the finals for the first time in the school’s history, before falling to MSU.

The Roadrunners were ready to end their season when they received an NCAA at large bid into the NCAA tournament, despite the loss of their conference championship. As it turns out, they also received a No. 2 ranking in the NCAA South Atlantic Region, which is what granted them the bid.

In other words, the Roadrunners got a second chance ticket into the NCAA tournament for the first time since 1997, and only the second time in program history. The team took their newfound opportunity and ran with it.

RCNJ quickly snatched the lead of the tournament by controlling the first and second rounds with two consecutive shutout victories, which would be the first NCAA wins in Ramapo College men’s soccer history.

To commence their season, the Roadrunners entered the sectional round of the NCAA Tournament for the first time ever; it was the farthest the school had ever made it.

The 2018 men’s soccer team has done an outstanding job representing Ramapo nationally this season. They have broken numerous records, made school history and overall have a lot to be proud of. Congratulations to Head Coach DJ Pinton and the entire men’s soccer team on a phenomenal season.