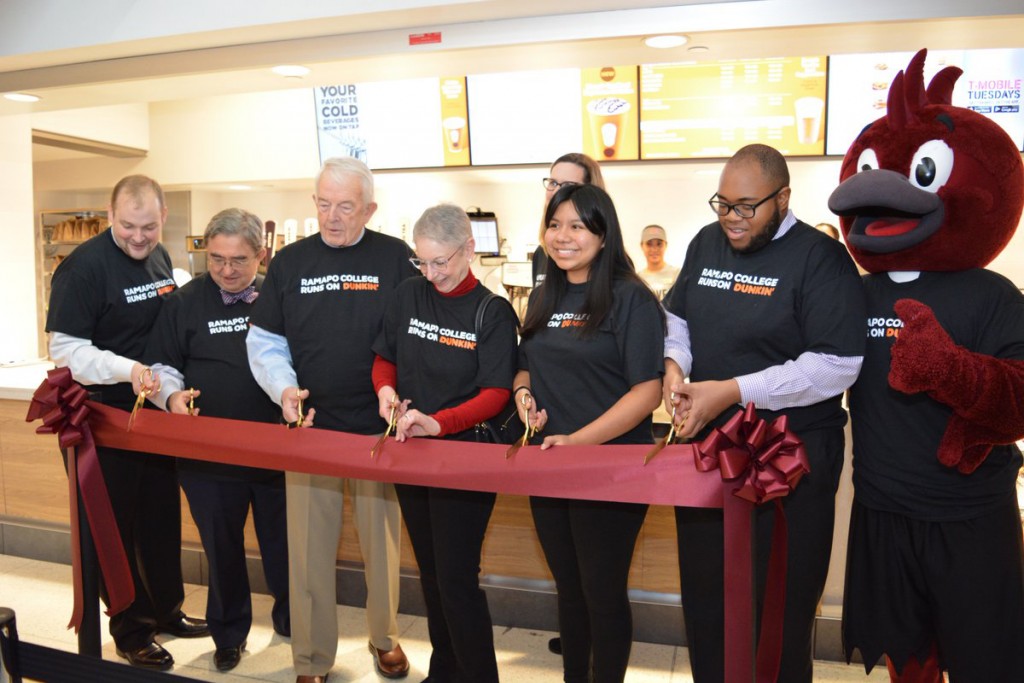 Ramapo College has opened a Dunkin’ in the Adler Center, and if college students didn’t run on coffee before, they definitely do now.

Balloons were placed around the entrance to the Adler Center to celebrate the opening of Dunkin’ this past Wednesday at noon. The line stretched up the stairs and around the bannister, where hundreds of students stood or sat on line waiting for their chance at a free tee shirt.

The first person waiting in line was freshman Felicia Terreri, who had been waiting since 11 a.m. to get her free tee-shirt and coffee.

Music played while the students waited for the ribbon cutting ceremony and President Mercer’s statement.

“This has been part of our #HomeSweetPo effort,” SGA President Stephan Lally said. “We were one of the last colleges to get a franchise on campus.”

It’s clearly paid off, as the anticipation for the opening had the Dunkin’ incredibly busy with the bustling line of patrons waiting for coffee and other goods.

The administration and SGA celebrated the event by donning their own “Ramapo College Runs on Dunkin” shirts. Even Fledge was spotted wearing one.

“We can formally say that Ramapo College now runs on Dunkin’.” he said. “And while we know faculty and staff are going to make great use of this Dunkin’, students, this is for you.”

On Mondays throughout the semester, the College would post about enhancing the student experience of #HomeSweetPo, which would highlight something the College has done in response to students’ feedback.

“Regularly, you’ve asked for your very own coffee shop here on campus, and today we stand here, able to say to you we’ve delivered on that promise,” Romano said.

President Mercer then stepped up to speak.

“I want to acknowledge the presence of our chair and vice chair of the board of trustees, Bill Dator and Susan Vallario, who are with us today,” he said. “I especially want to thank Sodexo as partners in helping us to bring the first franchise in Ramapo’s history to fruition.”

It is an exciting time to be opening a Dunkin’ on campus, but even more so as finals draw near. Though Thanksgiving has just passed, students still seemed extremely thankful that they will have Dunkin’ to help them survive the upcoming weeks.