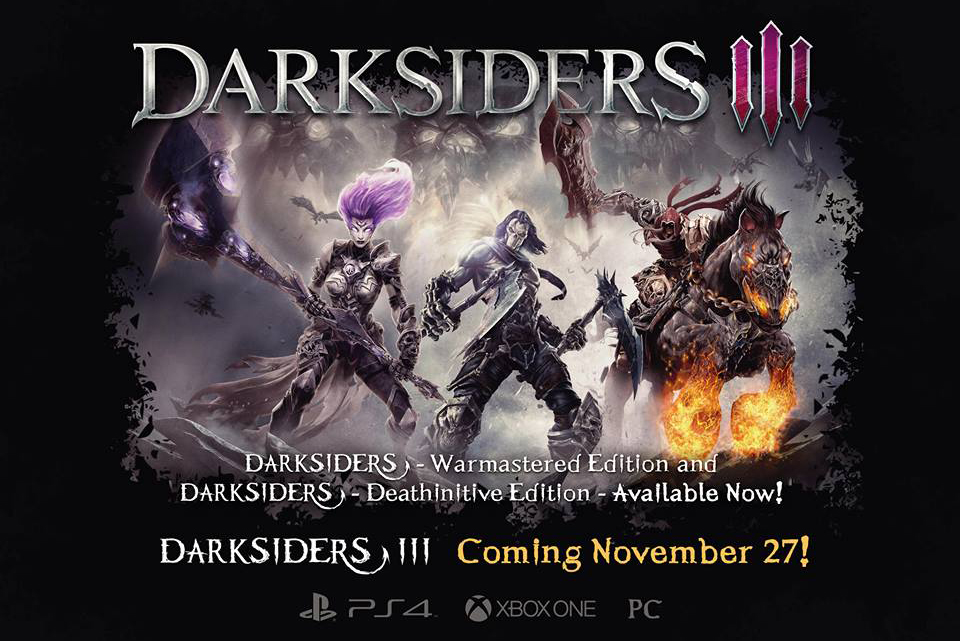 “Darksiders” is an overlooked video game franchise that was very nearly extinguished before it had run its course. Following the first two games in the series, studio Vigil Games planned a third entry, but after its parent company THQ filed for bankruptcy in 2012, the future of the series was in question.

A different publisher, Nordic Games, bought the “Darksiders” IP. The publisher renamed itself “Nordic THQ” and with the help of many on the team behind the first two games, it is responsible for the third entry in the “Darksiders” franchise finally seeing the light of day.

Every new game follows a different horseman of the Apocalypse as they try to prevent – or provoke – the end of the world. In this one, players follow Fury, the sister of War and Death, the protagonists of the previous installments.

The character of Fury starts off as very unlikeable and sadly does not evolve very much as the game progresses. The voice actress, Cissy Jones, does a fine job at portraying her, which is not a surprise: she won a BAFTA for her role of Delilah in the 2016 video game “Firewatch.” But even Jones cannot elevate the static character.

The graphics are artistically stylized and mostly enjoyable to look at, even though the game often looks like it belongs on the previous generation of consoles. The environments are often bland and many locations are similar to one another, with only a few interesting design choices.

The enemies Fury faces become more diverse with every new location, changing from demon spawn to creepy baby ghouls. Their design is detailed and shows how graphically creative this team can be when they put some effort in.

Just like the characters, the storyline is slightly unimpressive. War and Death had interesting motivations, but Fury’s only motivation is to become the leader of the four horsemen after she captures personifications of the seven deadly sins. Even though the series fails at creating a complex female character, at least they gave us a strong one.

The most important part of a video game is its gameplay, and luckily, it’s the best part of this one. Fury’s starting and main weapon is a whip, giving her attacks range and diversity. As the player progresses through the game, Fury acquires new weapons and abilities, further diversifying the gameplay options.

“Darksiders III” is a classical hack-and-slash video game, more linear than open-world and containing basic RPG elements. Just as the previous installments in series resembled other video game franchises, for example “The Legend of Zelda” or “God of War,” the third entry takes a lot of inspirations from “Dark Souls” and “Bloodborne.”

Thankfully, the combat is not as unforgivingly difficult as it is in the “Souls” games, but it is still more challenging than ever. When fighting enemies one-on-one the mechanic of evading their attacks and hitting them back is very fun and rewarding, but when multiple enemies enter the fray, it can become annoying.

The bosses are not as interesting as they could have been, but they still mostly present an enjoyable and rewarding challenge. Health depletes quickly, and Fury can be killed in only a few shots, which makes almost every mistake deadly.

“Darksiders III” is a mostly fun hack-and-slash video game with a mediocre storyline and outdated graphics that offers approximately 15 hours of enjoyable and sometimes infuriating gameplay. Keeping that in mind, everybody except for the hardcore fans of the series, should wait for a price drop, because the content this game offers does not justify the current 60 dollars price tag.