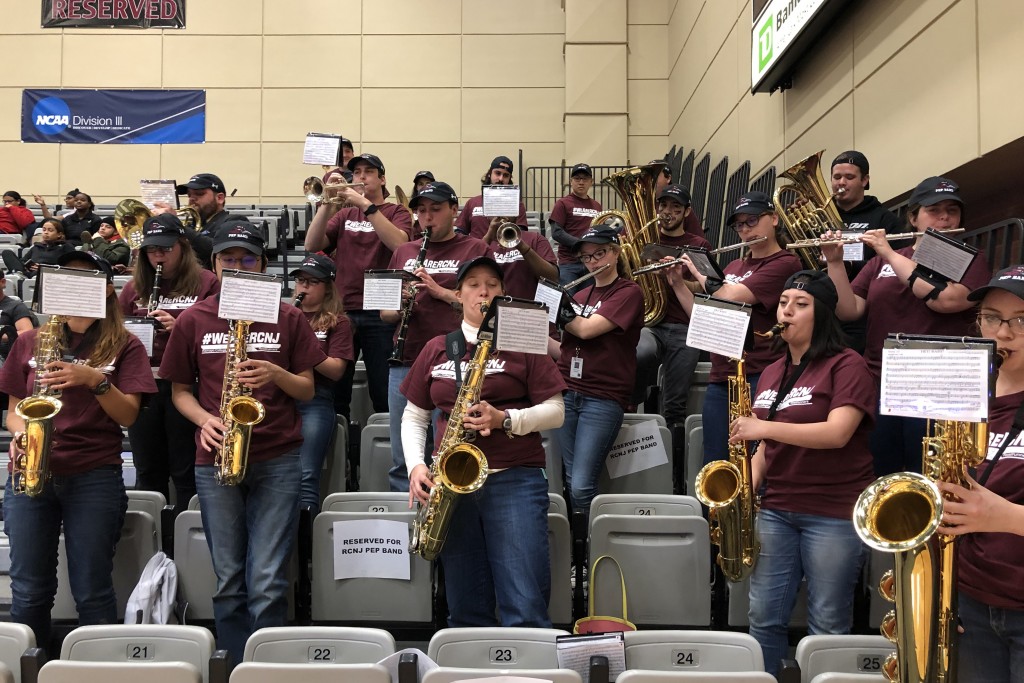 The Ramapo pep band is providing a soundtrack to Bradley Center basketball games for the third season in a row. During its first two years, the pep band rooted for the men’s basketball team during historic games, including two NCAA and two NJAC tournaments.

“The club was started by the students, they kicked off the whole idea,” said pep band coordinator David Marks. He said about seven Ramapo students were involved with the pep band from the beginning, and now there are over twenty students attending rehearsals from week to week.

“It’s a solid program that’s building itself,” Marks said. He believes the pep band’s momentum is linked to the recent success of the men’s basketball team. “We got to play in front of some really huge crowds, so a lot of people on campus got to see the band and hear the band.”

Starting out, the ensemble borrowed equipment from local schools for their practices and performances. With support from the athletics department and club affairs, the pep band was able to unveil new drumline equipment and attire for their musicians this year.

“Compared to high school, Ramapo’s music department is incredible and then pep band is just really great because its grown,” said freshman Pamela Martinez. “It’s really neat to see a big group of people playing and just having a lot of school spirit because you can never have enough of that.”

Along with groups like concert band, jazz band and chorale, pep band is one of many on-campus ensembles that encourages students to continue their musical pursuits beyond high school.

Marks is proud of how far the group has come as he has watched students mature and grow into stronger musicians. “It’s exciting to see the same kids come back year after year … we actually have to discuss senior night this year because we have a group of seniors graduating,” he said.

Students are equally enthusiastic and filled with pride as the pep band continues to gain performers and perfect their stadium sound, playing classics like “Sweet Caroline” and modern hits like “All Star.”

Junior student and pep band president, Alex Mayer said, “For the past two years, I was the only trumpet player in the pep band and this year we have two other trumpets and I’m just so excited for it.”

Mayer has been a member of the pep band since the very beginning and looks forward to layering trumpet parts to achieve a fuller trumpet sound this season.

Students who are interested in joining the pep band next semester are welcome to attend the pep band’s first spring rehearsal on Jan. 22 in h-wing from 8 to 9 p.m.