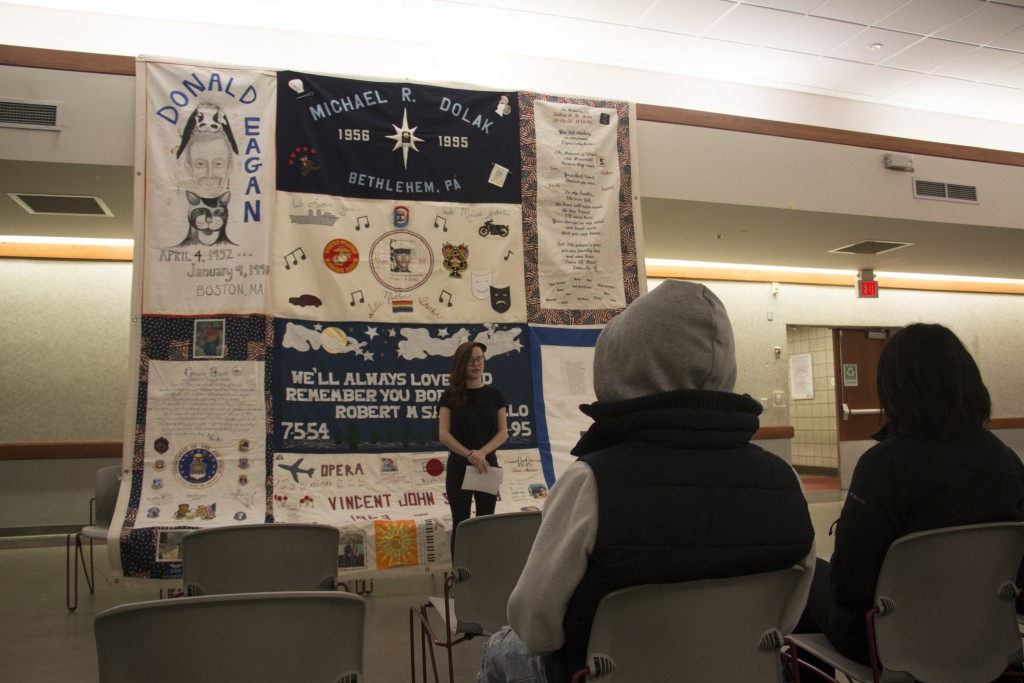 In observance of World AIDS Day, the Women’s Center held a candlelight vigil in Friends Hall on Friday evening to commemorate those who have died due to HIV and AIDS. The Women’s Center student health and wellness coordinator, senior Regina Cuddeback, opened the vigil by reading statistics about the AIDS epidemic before leading students in a moment of silence.

The candlelight vigil concluded AIDS Awareness Week, which began with informative discussions on Thursday and a viewing of a panel from the NAMES Project AIDS Memorial Quilt that was on display from 8 a.m. to the start of the vigil at 8 p.m.

“We originally used to program just around World AIDS Day on Dec. 1, but now it has expanded to a week to acknowledge the programs that people hold in light of AIDS awareness,” Cuddeback said. “The Women's Center has responded to a growing interest from the campus community in AIDS education and prevention which is why it's now a week.”

Following the vigil, students admired the immense quilt panel and read endearing messages written in memoriam of eight people who died due to AIDS-related causes. Many students were astonished at how large the singular panel of the quilt was, and even more surprised when they learned it was only one of the 49,000 panels from the memorial quilt.

“I thought it was already big to begin with and when I found out it was only a small panel, I was really surprised,” said freshman Kimberly Wolyn. “If you look really closely there’s a lot of really pretty embroidery…a lot of love went into it and [it shows] how much they really cared about the people who had AIDS.”

“All the heartfelt letters are super sweet, I was just reading them,” said junior Oliver Berglas. In addition to letters, there were also photos and decorative patches beneath each person’s name that are meant to tell a story about who they were.

“I can’t even imagine just all the lives it represents,” said junior Rose Eid gesturing to the quilt panel. “[The letters] are all very specific to the people. It would be cool to see them all as one.”

San Francisco gay rights activist Cleve Jones conceived the original idea for a memorial quilt in November of 1985. For the annual candlelight march honoring Harvey Milk and George Moscone that year, he asked each marcher to write the names of their friends and loved ones who died of AIDS.

Every name card was taped along the walls of the San Francisco Federal Building following the march, creating a display that looked like a patchwork quilt. From there, Jones and his friends made plans to construct a larger memorial, and within a year he created the first panel for the AIDS Memorial Quilt commemorating his friend Marvin Feldman.