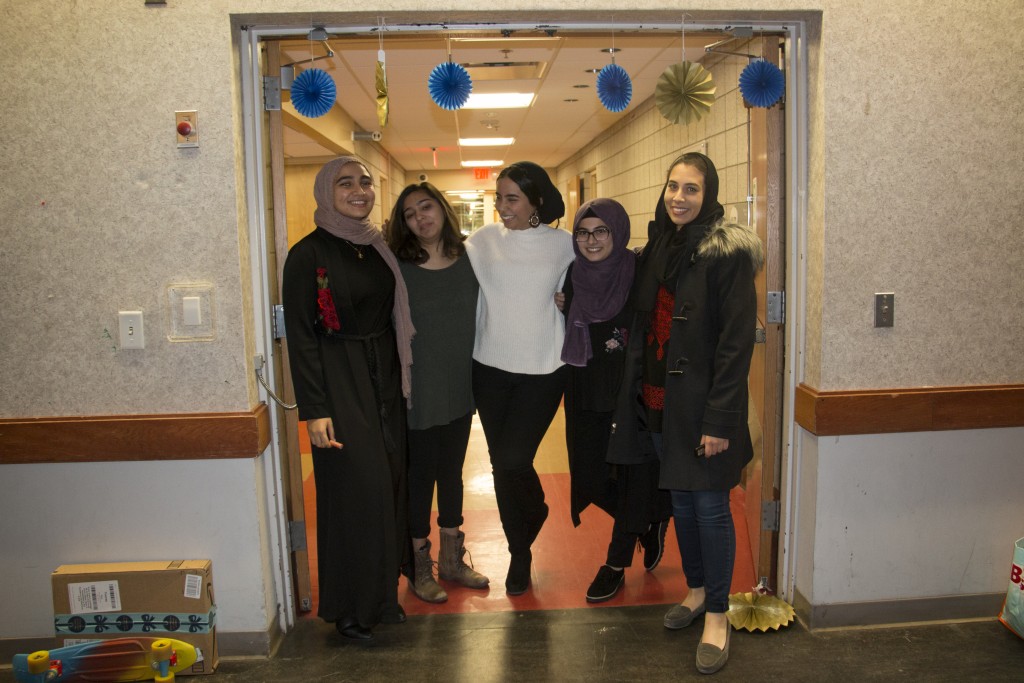 There are many things to celebrate as the year comes to a close, and at Ramapo College, students united to celebrate their different cultures and backgrounds. The College’s Muslim Student Association held an Intercultural Dinner in Friends Hall last Thursday to mark the end of the year and celebrate among friends with food, music and, of course, dancing.

“It’s a pretty light celebration, with food and dancing and music,” said senior Kate Bahaj, president of the Muslim Student Association. “It’s a chance for the clubs that usually wouldn’t sponsor together to come together and have a good time.”

Various clubs and organizations took part in the night’s festivities. The MSA was running the event, with Bahaj acting as emcee throughout the night. Other organizations co-sponsoring the dinner included the Black Student Union (BSU), Association of Latinos Moving Ahead (ALMA) and the RCNJ Spanish Club.

Having clubs and organizations like these on campus that represent students’ backgrounds and cultures helps to harbor an inclusive environment. Diversity and inclusion are fundamental pillars for creating a space where all students can learn and prosper equally and comfortably, and the dinner was a reminder of this sentiment.

“As a campus we need diversity, we need to step outside of our comfort zones and learn about different people and backgrounds,” said Bahaj. “We don’t have a largely diverse campus, but with the groups that we do have we try to connect together and do that.”

The night began with a delicious dinner, which members of the MSA helped to serve. The menu included dishes from various cultures, such as Afghani cuisine and empanadas. There were also Halal and vegan options, so all guests could indulge in the flavorful feast.

Once most of the attendees had a chance to fill their plates, the BSU took the floor to teach the rest of the room some dances. Members of their e-board came to the front of Friends Hall, where there was a large space designated for people to let loose and join in on the fun. The BSU’s e-board is composed of president Joreyah Johnson, junior; vice president Janay Davidson, junior; publicist Tamia Anderson, sophomore; secretary Deandria Barksdale, senior; office manager Iyana Ferrell, senior; treasurer Tyesha Forrester, sophomore; and academic advisor Marlin Marte, junior.

As students trickled onto the dance floor, VP Davidson explained that she and her fellow e-board members were going to teach everyone dances that were “iconic at events in black culture.” Most students were familiar with the first song, “The Cupid Shuffle,” which helped ease guests into what would be a night full of dancing.

The next song, “The Bicycle Shuffle,” was less familiar for guests, but just as enjoyable. Students were eager to learn the moves, which they picked up on quickly. The last song was another crowd-favorite, “The Electric Slide,” which everyone danced to emphatically, adding their own unique spins to the classic tune.

Before students left the dance floor, two members of ALMA – senior and president Karen Lara and freshman and secretary Jessica Sanchez – came to the floor to lead the group in a Mexican dance. With its fast and lively pace, the dance proved to be a bit more challenging than its predecessors, but many students were able to pick up on the moves and dance right along without missing a step.

Once the song concluded, Lara led the group in a Spanish challenge, where she would display a Spanish word to the room, and guests would have to guess what it meant. Challenge was an accurate way to describe the game: There were a few familiar terms, but for the most part, attendees were stumped by the phrases. The game allowed players to either sharpen their Spanish vocabulary or widen their exposure to new languages while having fun in the process.

The RCNJ Spanish Club came up next to wind the night down, with president Thomas Perez once again requesting everyone to get up out of their seats and partake in some Salsa dancing. Students that were not already completely exhausted joined Perez on the floor, pairing up to partake in the upbeat dance.

As the night ended, a few students remained on the dance floor, while others opted to grab a second helping of food. Members of every group in participation, as well as guests from the rest of the campus community, seemed to leave the night elated by the music, dancing and delicious treats.

“This dinner is really important because it shows different cultures and diversity and celebrates that at Ramapo. That’s why all the clubs that participated came together, to really share our differences and diversity, what makes us each unique,” said Perez.