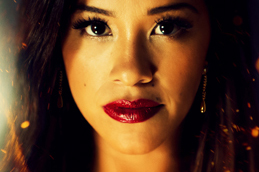 Within the past several years, the action genre has gone through both ups and downs when it comes to the overall quality of films audiences have been receiving.

On the other hand, however, many studios believe that if a major, or rising, Hollywood star is headlining an action project, that is simply all they need for their film to not only connect with audiences, but to become financially profitable as well.

Unfortunately, that mentality has sometimes led us to some of the blandest and most generic action-thrillers in recent memory. Director Catherine Hardwicke’s “Miss Bala,” shockingly enough, might just be one of the laziest attempts at continuing this creatively bankrupt trend of action filmmaking.

Gina Rodriguez stars as Gloria Meyer, a struggling makeup artist who travels from Los Angeles, California to Tijuana, Mexico to visit her friend Suzu (Cristina Rodlo), who is planning to compete in the highly-anticipated Miss Baja California beauty pageant. However, when Gloria and Suzu visit a nightclub one night, things take a turn for the worse as members of a Mexican drug cartel violently break in and murder innocent civilians, and through a series of events abduct Gloria as well.

In order to see Suzu again, the cartel’s leader Lino (Ismael Cruz Córdova) forces her to complete various illegal and violent tasks for them, as Gloria ultimately finds herself unwillingly in the middle of an ongoing battle between the cartel, the local police department, and the Drug Enforcement Administration (DEA).

The biggest problem with “Miss Bala” is a fairly simple one at that: There is absolutely nothing even remotely special about it. With a narrative that predominantly follows a group of criminals constantly running away from both the law and U.S. forces, Hardwicke had the potential to possibly give these characters a sense of humanity, executed in a manner that engages the audience on a distinctive level.

Instead, “Miss Bala” arguably goes for the bare minimum when it comes to storytelling, as it chooses to settle for monotonous and sometimes poorly edited action sequences and a script that does Rodriguez and the rest of the cast no favors.

Scenes where Gloria could be showing fear or remorse, especially within the first act, are often substituted with expressions that simply don’t give enough emotional leverage to even care about her current predicament. One can certainly tell that, from an acting perspective, Rodriguez is trying to make the audience connect with her character, but more often than not, both the lifeless screenplay and Hardwicke’s direction hold her back from ever doing so.

Rodriguez is a great actress overall, and to star in one of the most generic and uninteresting action thrillers that I have seen in a long time is just an insult to both her and the audience.

Rodriguez’s character, however, is not the only one lacking effective characterization; the members of the cartel, particularly Lino, are never given any concrete motivations. Audiences are probably wondering what exactly these criminals are fighting for and what led them to become a part of this war.

The film only vaguely answers these questions, and this wouldn’t be a pressing issue if these characters were even remotely interesting to watch, and unfortunately that’s anything but the case.

The action genre, much like the horror genre, has always had the capability of eventually becoming stale and worn-out.

As much as recent action films like the “John Wick” (2014) or “Upgrade” (2018) have shown that the genre can be taken to new heights in order to preserve any form of originality, films like “Miss Bala” show that maybe the genre should be reserved for directors and studios who would rather step outside of the box for a change.