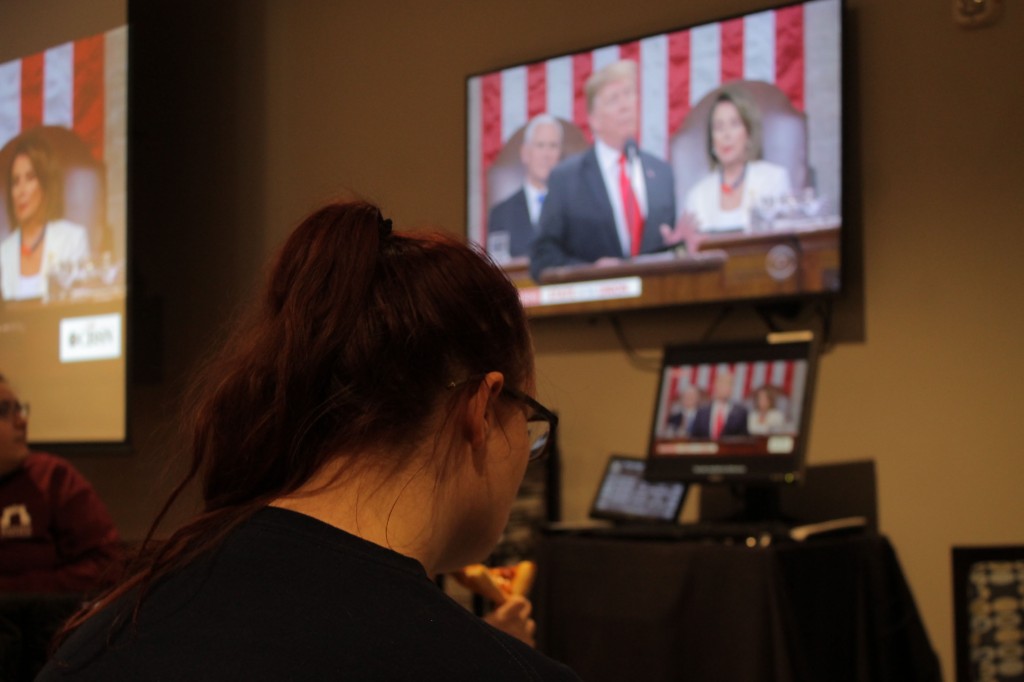 The event was low-key, offering food for students and screening the address on two separate networks in order to maintain a sense of equal coverage.

The president of the Students for Liberty association, Kyle Francheschini, noted the importance of this balance: “We need places where people can talk openly, even if they strongly disagree.”

Teacher encouragement to be politically aware and involved was another factor that made the viewing event successful. Many students had attended with Professor Brandon Martin and his social science class, but stayed for the full address.

“Ramapo does a good job having teachers involved,” said freshman Nathalee Martinez. “The attempt is there.”

Another student, freshman Rosetta Rosa, who had come with the class, said, “I’m glad he encouraged us to go because I learn a lot from these things.”

The environment of the event was one of learning. While some students noted how they tend to see many of the same faces at on-campus political events, another student, sophomore Alexis Wollui, noted that even those who are not active can feel welcome in these spaces.

“It feels like a nice environment to experience it in,” she said of the address, “Just come in and learn, no pressure.”

Excitement for the event was running high, and not just from the encouraging professors and CCEC members running the viewing party. Students at Ramapo look forward to being politically active in group settings and seeing the same involvement from others.

“This is like my Super Bowl,” said freshman Karen Kabrera. “The College allows me to speak openly and I appreciate that.”

Even in a time when politics appear so polarized, Ramapo students are finding ways to come together. The State of the Union is agreeably an important night for Americans to pay attention to, according to Alexis Wollui, who called it “the doctor’s checkup of America.”

Though people inevitably perceived the events of the address itself differently, students will remember the experience of watching it the same way. They will remember that Ramapo is a campus where all political ideas are welcome, and that anyone and everyone is free to continue to educate themselves with the help of others.

Many students are very welcoming of differing opinions, and want the same neutral spaces to learn and speak no matter their views.

“Most people want a better world for everyone,” said senior Lita Nulk, secretary of the Students for Liberty. “We just have different ideas about doing that.”