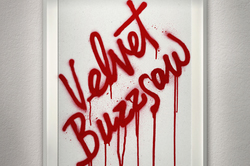 Dan Gilroy’s "Velvet Buzzsaw" is an introspective look into an LA art scene, bouncing from the perspectives of gallery owners and revered critics to those of young interns and non-professional artists. It features great performances from an ensemble cast of familiar faces, most notably Jake Gyllenhaal, Rene Russo, Toni Colette, Natalia Dyer, John Malkovich and Daveed Diggs.

Gyllenhaal plays Morf Vandewalt, a snobby art critic who confidently voices his opinion on the quality of all things from artwork to funeral arrangements. He frequents an art gallery owned by Rhodora Haze (Russo), a manipulative art dealer. Haze employs Vandewalt’s friend Josephina (Zawe Ashton) as an assistant, though she is unhappy with Josephina’s frequent tardiness and lack of ambition.

Her mood changes when Josephina stumbles upon a wealth of macabre paintings in her apartment building that were made by a recently deceased man named Vetril Dease.

Josephina steals the pieces to showcase at Haze Gallery despite knowing that Dease wished for all his artwork to be destroyed after his death. Dease’s paintings are dark in content yet inexplicably alluring, creating a hot market for collectors and dealers to acquire pieces. Soon, one by one, those involved in the showcase begin falling victim to mysterious accidents, and Vandewalt begins to wonder whether something more sinister than coincidence is at work.

Promotional material frames "Velvet Buzzsaw" as a cerebral experience on par with that of Gilroy’s directorial debut film "Nightcrawler," which received high praises from critics’ associations worldwide for its thought-provoking commentary and dark tone. While "Buzzsaw" builds a solid foundation for such an experience, it fails to go much further beyond mere concept.

The film spends much of its runtime establishing and evolving the complex web of relationships in the cunning art world. If viewers are not particularly interested in the dynamics of art sales and exhibitions, it will be hard to stay invested.

The tagline “all art is dangerous” has a literal meaning. Gilroy personifies the emotional impact of art as a physical force in the form of a spirit. The accidents happen to the characters who do not truly value art, which exemplifies Gilroy’s commentary that all art is valuable no matter the criticism it garners.

After that, nothing major happens. The characters suffer and the story abruptly ends with a perfunctory cliffhanger. The story is barebones, hardly reaching a climax.

Special effects are used to make slight movements in the paintings – like wavering flames and moving eyes – that are so small at times it seems that the viewers’ eyes are playing tricks on them.

The effects become more apparent as the story moves forward, but they mostly remain realistic without looking cheap. These details paired with low, throaty vocalizations and eerie violin create a paranoid and uncertain atmosphere around the paintings.

The cinematography is clean while still bringing inventive choices in framing, lighting and motion that effectively evoke uneasiness and dread. Particularly, one shot of Josephina that takes place in Dease’s apartment balances warm and cool light with heavy shadows in a way that mimics the look of an oil painting.

Other sets have a sharp balance of color and empty space that puts a clear divide between those who truly create art for the love of it and those who are invested in the art world for financial gain. The film has a style that exemplifies the versatility of art.

"Velvet Buzzsaw" has a message to share, but it lacks an intriguing story with which to do so.

Viewers become interested, wondering what the story will amount to, but are left unfulfilled. For viewers who find character drama in fast-paced business worlds interesting, "Buzzsaw" will be an entertaining and spooky way to spend two hours. For those who hoped for a dark thriller that uses horror as a vehicle for social commentary, disappointment awaits.