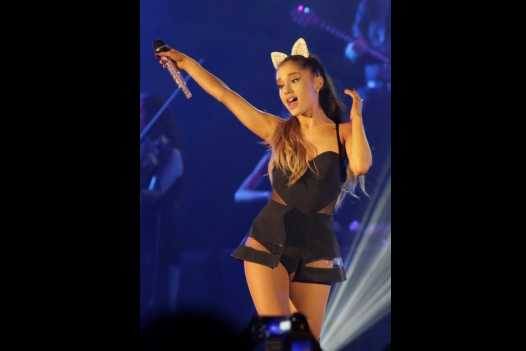 After a tumultuous period of her life, Ariana Grande has released her highly anticipated fifth album, “thank u, next.” Grande’s album focuses on love, loss and recovery, after ex Mac Miller’s death in September 2018 and calling off her engagement to comedian Pete Davidson.

“thank u, next” hits the ground running with a classic Grande song “imagine,” which is one of the many homages to Miller throughout the album.

Grande described the song as showing “a simple beautiful love that is now (and forever) unattainable.” Miller’s death had a massive impact on her and her work, and he is alluded to in “7 rings,” “thank u, next,” “in my head” and “ghostin.”

Though the album focuses on personal, heavy topics, Grande’s mastery of lyrics allows anyone who listens to relate to what she’s been through.

On “needy,” Grande sings about, well, being needy. “If you take too long to hit me back / I can't promise you how I’ll react / But all I can say is at least I'll wait for you.”

In direct opposition to “needy,” “nasa” is all about needing space. It is easily one of the best songs on the album, with catchy hooks about being alone. She sings, “Usually, I would love it if you stayed the night / I just think I'm on another page tonight / It ain't nothing wrong with saying I need me time.”

“fake smile” is all about putting on a happy face when confronting pain and lying about it – and vowing not to do it anymore for the sake of others. The melody of the pre-chorus is reminiscent of the sound from Alessia Cara’s “Scars to Your Beautiful” with lyrics including: “I can't fake another smile / I can't fake like I'm alright.”

Grande celebrated the release of the album with a music video for the final track, “break up with your girlfriend, i’m bored.” The music video features “Riverdale” actor Charles Melton and includes a twist at the end that gives a new meaning to the song.

Throughout “thank u, next,” Grande breezes through a variety of subjects and styles with ease, and it makes for an album that’s lyrically complex with a plethora of sounds, and it’s one of her best works yet.