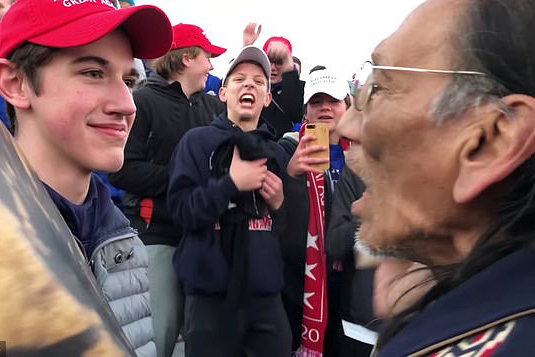 At a March for Life rally in Washington D.C. back in January, students of the Covington High School were in attendance in their “Make America Great Again” attire. Many different organizations of people were in attendance, including a group of black Hebrew Israelites and Native Americans. Towards the end of the day, there was an incident between all three groups that caused a media disaster.

Many media outlets made it seem like the students of Covington were being racist and abusive towards the Native American group when it was the complete opposite. A group of Hebrew Israelites were yelling racial and homophobic slurs at all people, including the Native American group, where they were heard screaming “Uncle Tomahawk” other racial stereotype remarks.

They were calling all the students “white crackers” and homophobic slurs while the students stood and watched and listened in a peaceful manner.

After constant verbal attacks from the group, the students began to start yelling back by doing their school’s pep rally rituals to overpower the group. A Native American man, Nathan Phillips, began playing his tribal instrument to try and keep both groups from fighting.

It was looked at as disrespectful in videos and pictures because the moment made it seem like the group of white students were chanting and making fun of the Native Americans, but they were really trying to tune out the group in the back that was continuing to yell hateful slurs.

Media outlets were reporting that the group was yelling “Build the wall!” but there is no actual proof or video evidence that anyone from Covington High School was yelling this particular line. Because the students were in “Make America Great Again” attire, they were made to look like they were this violent racist group when they were not the problem here at all.

Nick Sandmann, the boy seen in the famous photo of the standoff between the MAGA supporter and Native American, was falsely reported on and attacked by the media, numerous public figures and the world. Sandmann’s lawyer is now suing all the news outlets who reported false stories, as well as public figures who commented negatively on the boy in any way.

People jumped to conclusions and made it seem like the boy was this evil person when in reality, he was just an innocent person trying to calm everyone around him down while staring in the face of a scary situation. The media needs to be punished for promoting unverified news.

Certain media outlets have created false stories many times in the past, especially to create an anti-Trump agenda. People who work in media should be following the SPJ Code of Ethics, which is a code that journalists are supposed to follow to make sure every story is equal and fair.

Every media outlet who has reported falsely against the Covington High School students should be punished with fines and consequences. Every public figure, politician and celebrity who falsely reported or commented on this situation should be punished as well.

A learning lesson from all of this should be to gather all the facts, videos and materials before declaring someone as guilty.

The United States of America lives by the statement, “Innocent until proven guilty,” and each and every media publication should be treated as a criminal investigation before another biased catastrophe occurs again.