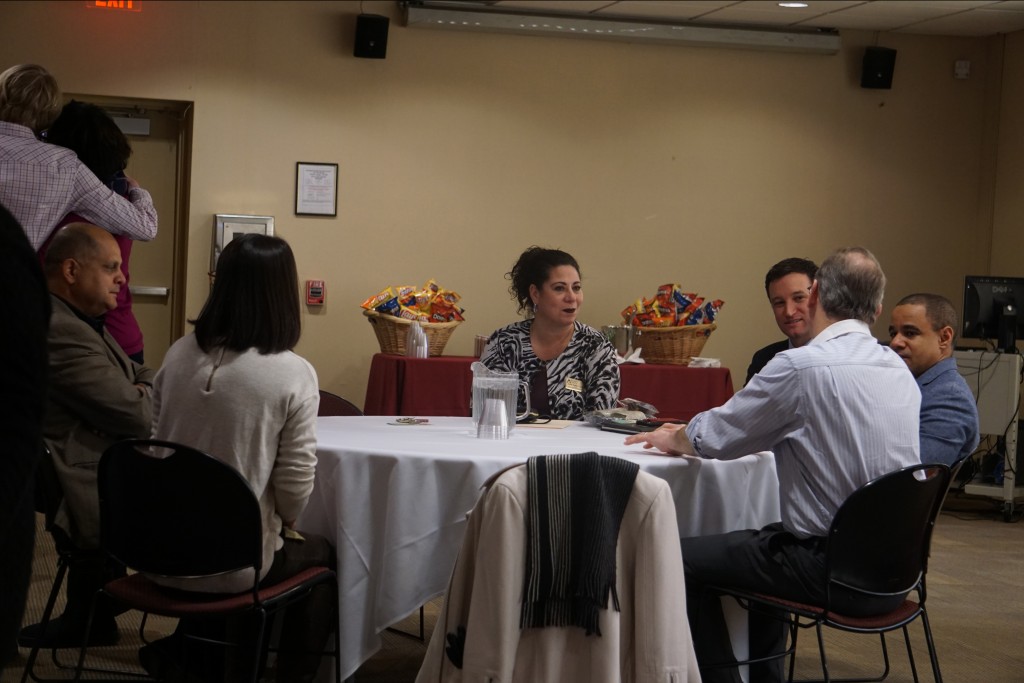 An internationally-recognized expert in education shared his perspective on the responsibilities of teachers at an Alumni Lounges luncheon held prior to the Diversity Convocation on Wednesday afternoon.

Dr. Kevin K. Kumashiro, who has authored and edited a combined 10 books and delivered lectures on education throughout the world, was introduced to an audience of about 90 faculty and administration members by Ramapo’s chief equity and diversity officer Nicole Morgan Agard and President Mercer.

“Dr. Kumashiro’s idea of education and the role of the teacher is to empower the student,” Mercer said in his opening remarks. He characterized Kumashiro’s work as a “call on educators to critically examine the everyday decisions of teaching and learning in an effort to design education that is anti-oppressive and affirms social justice.”

Kumashiro framed his 30-minute lecture as an examination of “four lenses for reading the world,” which he described as concepts important to his work in identifying problems in education. He described lenses in this context as an individual’s point of view, which is affected by countless internalized experiences.

“Our life experiences are constantly creating and changing the lens through which we look through to make sense of the world around us,” he said, illustrating his point by describing an imaginary romantic couple with a “special song.”

The song is perceived positively by the couple during their relationship and negatively when they break up.

“Our job in education isn’t to insist that everyone look through my lens. Our job… is to grapple with the recognition that every lens is partial,” he continued.

According to Kumashiro, “the problem of common sense” represents a major hurdle in discussions regarding education. He argued the lens of “common sense” has changed drastically over time, pointing to an early (male-dominated) American education system that touted imposed limitations on female education as common sense.

There is no reason to believe current common sense is any less mutable then the past’s. To this end, Kumashiro cited test scores, competition between schools and September-June academic calendars as contemporary educational concepts supported “by both ends of the political spectrum” that lack a substantial basis in research.

Teachers and administrators should be unafraid to explore options not accepted by established opinion in their efforts to improve their students’ academic experience both inside and outside the classroom.

“Education is not about affirming the common sense of our time,” Kumashiro said. “Education should be about grappling with the status quo.”

Returning to the luncheon’s theme of diversity and equity, Kumashiro addressed the U.S. education system as a whole.

“The reality is we never created schools for equal educational opportunity,” he said. “We created schools in this country for only the most elite, and as we were forced to integrate more and more, we just came up with more ways to divide and sort them.”

Education in the U.S., according to Kumashiro, has always been about “dividing and sorting” its citizens and attaining national goals: Colonial Americans were schooled in order to impart a moral education and allow for socialization, while the prioritization of STEM in U.S. curriculums during the Cold War furthered “imperialism and global domination.”

Kumashiro concluded his lecture by arguing large-scale change in the field of education can only occur when policy changes are paired with similar changes in national consciousness. This can only occur when the premise of the status quo is challenged by educators.

“We must offer a different story of what is possible,” Kumashiro said.