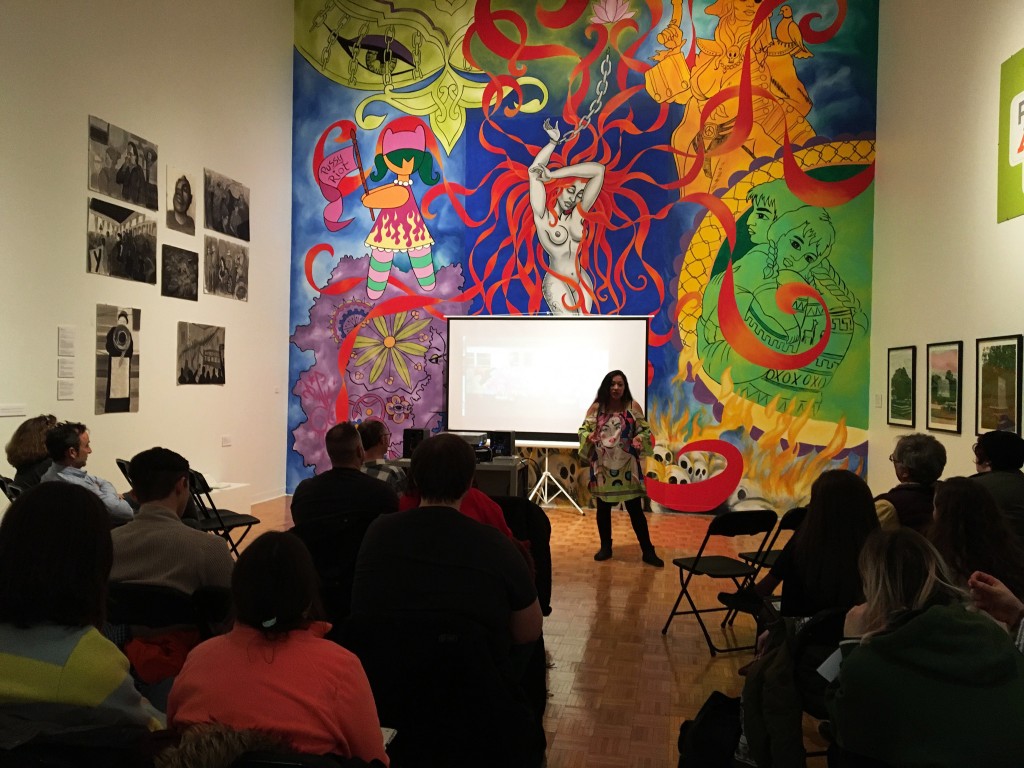 Legendary street artist Lady Pink shared her experiences as an up-and-coming female graffiti artist during the 1980s on Wednesday evening in the Kresge Gallery of the Berrie Center, where one of her large-scale freehand murals is on display.

Dubbed “the first lady of graffiti art,” she was one of the first women active in the male-dominated subway graffiti culture. Through murals and graffiti, she crafts messages about female empowerment and social issues. During her talk in the Kresge Gallery, Lady Pink presented a slideshow that spanned nearly 40 years of her mural and graffiti artwork since she began writing graffiti in 1979.

At 16 years old, Lady Pink began writing graffiti art on subway trains alongside many of the pioneering graffiti artists she idolized like Zephyr and Lee Quiñones. By her senior year of high school, she was immersed in the New York City art scene where she became acquainted with Keith Haring and went to parties where Andy Warhol was in attendance.

While still in high school, she traveled the world and exhibited her paintings in art galleries. Emerging as a female graffiti artist was not an easy task, as she recalls having to gain the respect of the other established male street artists.

“It took months to convince them that I was brave and tough… that I could carry my own paint, that I wasn’t going to slow them down,” she said. “It took a while to convince them, but once I did, there was no doubt that I had nerves of steel and I was extremely reckless.”

She said the gender discrimination she faces in the art community still persists today, as construction workers and landlords doubt her skills when leading mural projects. In the past, her husband has helped her negotiate financial decisions regarding her artwork.

“Apparently being a white guy with blue eyes gets you lots of money. Being a Latin woman and stuff, not so much,” she said. “This is America, [and] it’s still a white man’s world.”

Just like any art form, she said graffiti art takes practice and a level of mastery before people are even able to attempt it in the dark. She compared the thrill of graffiti writing to that of an addictive extreme sport where players are relentlessly pushing boundaries.

“There is no equal in the kind of speed and fearlessness that street artists exhibit, not just meeting deadlines and doing big corporate jobs but in scaling like Spiderman and doing it all in the dark with your knees shaking, and your heart in your throat with fear.”

In addition to the commissioned work she is hired to create for different communities, Lady Pink and her husband own a company together where they paint murals in restaurants and nightclubs.

“I’ve done paintings for museums and galleries, but our true love comes from doing public art, for painting murals for communities who cannot afford massive amounts of budgets to pay some professional artist to come in,” she said.

When creating public murals, Lady Pink said she must be mindful of the community she is designing the mural for. Despite wanting to make political or social statements in her artwork, she said the mural should invariably reflect the personal values of the community.

Lady Pink continues to share her 30 years of experience by holding mural workshops and mentoring college students around the world.

Senior art student Daniel McElrone said, “The name of the exhibit being ‘Public Art,’ I think they hit the nail on the head. This is exactly what we should have in here.”