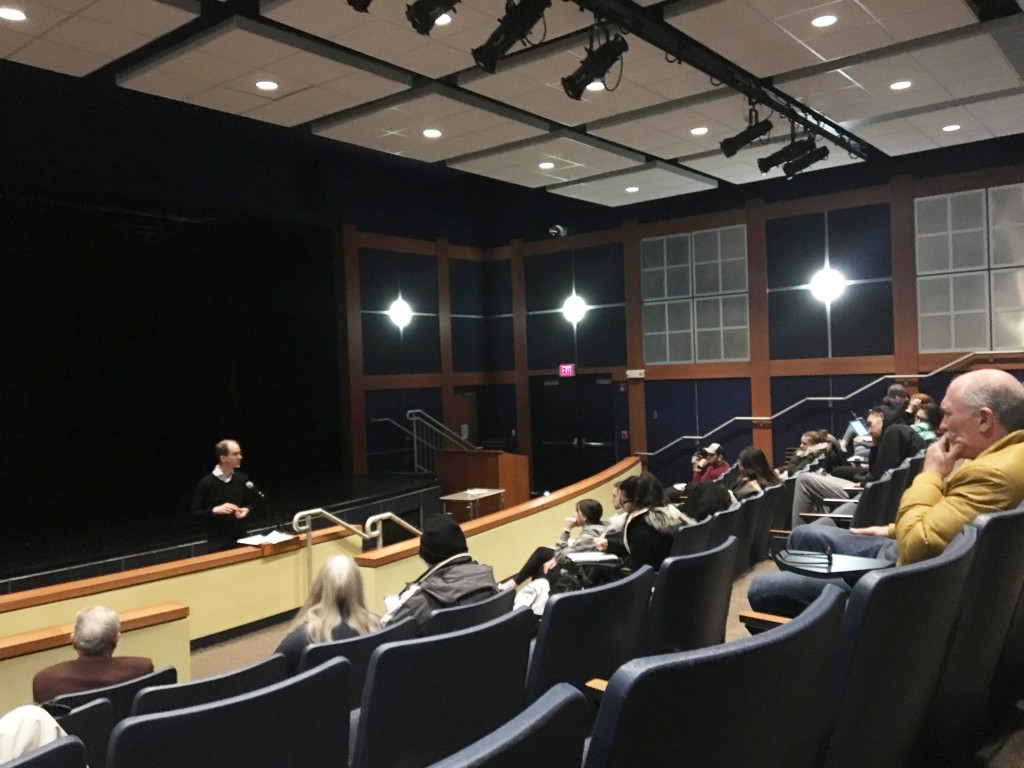 The Gross Center for Holocaust and Genocide Studies hosted a lecture led by Dr. Paul Hanebrink on the propagandist myth of Judeo-Bolshevism. Hanebrink is an associate professor of History and Jewish Studies at Rutgers University-New Brunswick and recently authored the first comprehensive book on the subject titled, “A Specter Haunting Europe: The Myth of Judeo-Bolshevism.”

Throughout the lecture, he highlighted research from his new book, including the role of fear-inducing conspiracy, the myth’s relationship to Nazism and how it impacted Holocaust remembrance. According to Hanebrink, the myth still persists today on both sides of the Atlantic in the wake of revitalized right-wing nationalism despite the fact that the threat of Communism in Europe faded three decades ago.

“Communism is vanished and yet the myth of Judeo-Bolshevism—the idea that Communism was created by Jews and that Jews were therefore to blame for it—remains strangely relevant,” Hanebrink said.

Following World War I, Nazis framed the spread of Communism as a Jewish plot intended to destroy the nations of Europe. This severe propaganda became a potent political weapon used by fascists, conservative Christians and Europeans terrified by Communism.

As a result of the propagandist association, there were “deadly consequences,” in the words of Hanebrink. Although many Jews did not identify as Communists, they were negatively stereotyped as the repetitious rhetoric shaped into a real, imposing threat to Europe.

At Nazi propaganda events and rallies, Adolf Hitler equated terror and anarchy with Jews and Bolsheviks in the mid-1930s. During the 1937 Nuremberg Party rally, Hitler said, “We have a serious interest in making sure that the Bolshevik plague does not spread further over Europe. Jewish-Bolshevism is an absolute alien body in the community of Europe-cultured nation.”

Taking inspiration from Hitler’s toxic rhetoric, Soviet experts adopted his vision and reinforced the myth that the “anarchy of Communism” originated from Jews.

“The myth of Judeo-Bolshevism survived into the present [and] survived the collapse of Communism because it became a strong rhetorical tool to undermine the moral power of Holocaust memory,” Hanebrink said.

According to Hanebrink, Holocaust memory is associated with liberal democracy and newfound respect for racial differences. While these ideas traditionally transcend national borders, some right-wing European nationalists condemn Holocaust remembrance as they believe it's nothing more than a facet of an illegitimate liberal agenda designed to impose on their nationalist pride.

Hanebrink explained that this extreme right-wing nationalism can be interpreted as a dog-whistle for hostility toward liberal order that favors human rights and political correctness.

Junior Esther Gonzalez is in Dr. Riff’s Holocaust and Media class, where they analyze propaganda through Holocaust-era films. Following the lecture, she said, “Before this, I didn’t know exactly what the propaganda entailed and it’s really devastating.”

As the director of the Gross Center for Holocaust and Genocide Studies, Dr. Michael Riff organizes events each semester that invite historians and speakers to campus.

“The myth has been around for a long time, that Jews were responsible for Communism, that Jews were purveyors of Communism, whereas [Hanebrink] pointed out, that’s not the case,” he said. “Very few Jews voted or supported Bolshevik or left-wing socialist candidates.”

Riff explained that the myth has not gone away, as many white supremacists reinforce it by denouncing Jewish financiers like Michael Bloomberg and Mark Zuckerberg as manipulators of the world economy.

“Even what the people chanted in Charlottesville—‘You will not replace us’—is indicative of that narrative,” Riff said. “It’s not as if it’s just gone away, it hasn’t. It connects to this whole notion that Jews are somehow, as a group, cohesive and conspiratorial, and involved in manipulating the electoral process and the economy.”

The Gross Center for Holocaust and Genocide Studies will show a film titled “1945” directed by Ferenc Török in the H-wing auditorium on April 4 at 10 a.m.