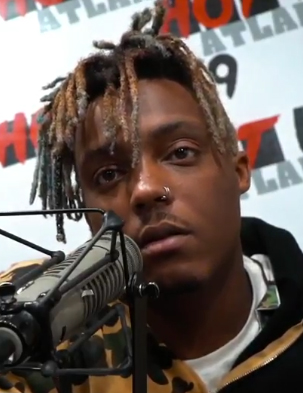 The highly anticipated Juice WRLD album “Death Race for Love” was released last Friday, March 8. This was the rapper’s sophomore album, and it was well worth the wait.

At only 20-years-old, Juice WRLD presents a finely produced work that seems to be made with much more experience than he has as an artist. His youthfulness in his words and topics of interests mixed with the fully fledged production quality is what makes “Death Race for Love” so great.

Even before listening, the eminence of this album was apparent through the album artwork. Before the album’s release, Juice WRLD released a sneak peek of the album cover design.

Inspired by the cover art for the PlayStation game “Twisted Metal 4,” Juice WRLD is seen as giant figure grabbing two cars to cause their collide. This visual was telling in the way that the future listeners already knew this album was going to be no-joke.

Rappers young Thug, Clever and Brent Faiyaz are all featured on this album. Fortunately, the features are not excessive, which is enjoyable especially since the album is 22 songs-long.

This elevates the crucial theme for the album: “Death Race for Love” is undeniably Juice WRLD. Lyrically, this work defines him, and by not including many features, it makes for a raw listening experience as he is presenting his most authentic self to the listener.

To me, the standout song on the album is by far “Flaws and Sins.” The title of this song is truly ironic as this piece is near flawless. The introduction of “Flaws and Sins” samples the iconic base beat heard in Weezer’s “Say It Ain’t So” which I found to be an unexpected yet smooth touch. The lyrics are modern and relatable, and it’s a great example of Juice WRLD’s maturity in comparison to his older work.

This album, however, was unnecessarily long, clocking in at one hour and twelve minutes. It is rumored that Juice WRLD records over a dozen songs every time he finds himself in a studio, so the amount of songs on this album with this knowledge doesn’t evoke much surprise.

Yet, there are plenty of great songs on this album that could have been made shorter, more cohesive work without the addition of multiple good or mediocre tracks (an example being “Syphilis”).

All in all, Juice WRLD proved himself to be more than a one-hit wonder. “Death Race for Love” is an exceptional work in sound, in production and lyric value, and even in the physical imagery.