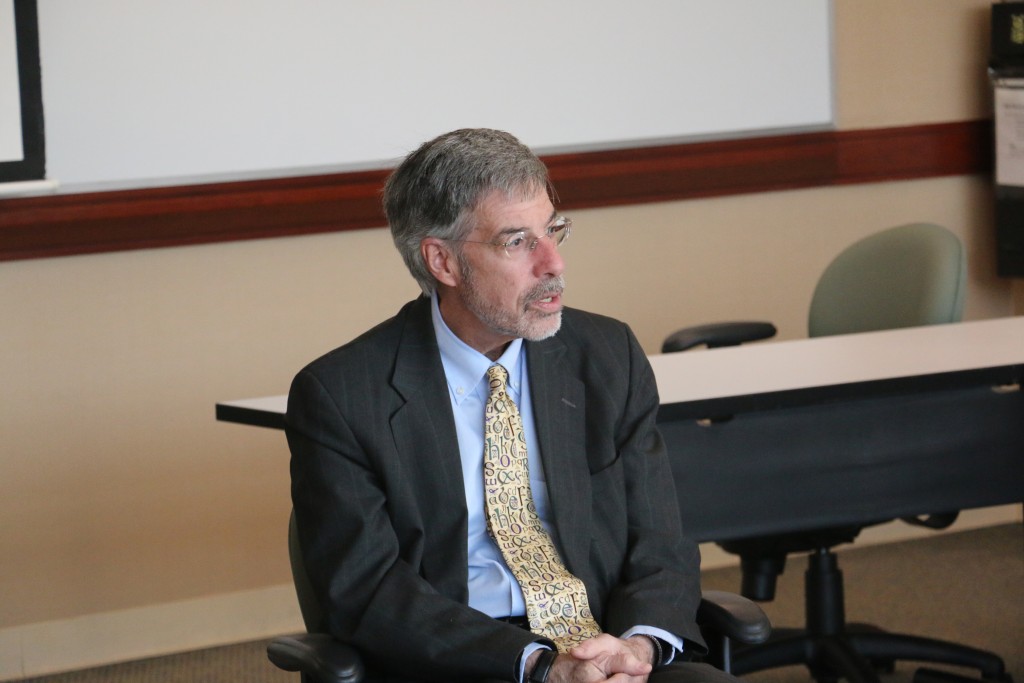 Students interested in careers in law or learning more about the legal system had the opportunity to meet longtime attorney and Ramapo alumnus Gerald Brennan last Thursday as part of the Law and Society Speaker Series. Brennan spent his career working for Legal Services of Northwest Jersey, which provides free legal representation in civil cases for low-income residents of Morris, Somerset, Hunterdon, Sussex and Warren counties.

Brennan, a member of the first graduating Ramapo class of 1973, entered as a psychology major but graduated with a degree in literature. His first job was at a social work agency in Paterson, but he decided that pursuing a law degree would allow him to help the populations he worked with, especially involving issues of poverty, on a deeper level.

The civil cases in which Brennan has assisted range from matters such as housing and guardianship, to domestic violence and involuntary commitment to mental health facilities. He specialized in representing tenants in eviction cases and the mentally ill in commitment cases; now retired, he works with legal services to develop volunteer lawyer programs for eviction cases specifically.

The Law and Society Speaker Series is organized by Dr. Serban, an associate professor of law and society at the College. “I wanted [students] to have an opportunity to see what I think is one of the best parts, frankly, of American law, which is the public interest aspect,” Dr. Serban said of bringing a legal aid perspective to students.

Access to free legal counsel has been available to Americans in criminal cases since the Gideon v. Wainwright Supreme Court decision in 1963. Legal services for civil matters began to be funded by the federal government in the 1960’s, and in 1974 former President Nixon passed the Legal Services Corporation Act, which set aside significant funding for legal aid clinics.

Brennan was able to volunteer with Essex-Newark Legal Services while still a law student at Rutgers Law School, citing the availability of clinic volunteer work as a key factor he looked for when choosing a law school. The opportunity to get court experience early on was a major draw, according to Brennan, and he encouraged prospective law students to consider the same.

The guest speaker was able to give students a comparison between employment with legal services versus a private firm, having worked in the private sector for two years. In his time there, Brennan observed that there was a strong emphasis on generating billable hours. He found himself in the difficult scenario of having to sue clients for unpaid fees, creating an even worse situation for those who could least afford his services to begin with.

This led to his eventual commitment to legal aid, where he stayed despite its downsides. Brennan acknowledged the possible burnout that comes with public interest careers. In addition, he said, the funding can fluctuate, so annual raises are not guaranteed.

The work environment was another reason Brennan remained in legal services and recommends it. In terms of structural organization, “We’re not too stuck on titles,” the attorney said. “My boss was always open to talking about my cases.”

One of the major positive changes in legal aid work has been how lawyers at these clinics choose to make careers out of it, as Brennan and many of his colleagues have done, rather than moving on after a few years. This may be signaling a shift in the conception of the need for these programs.

“This is an area of law that may not be so familiar to students,” Dr. Serban said. “They might have a sense of public defense, but they don’t understand fully that there is also a vast area that legal services does.”

For students interested in legal services programs, Brennan advised interning with any of the other public interest organizations in New Jersey as well, including the Education Law Project and the Community Health Law Project.

Brennan made clear the unity that comes from this kind of a career in law which is unique within the field. “You have a common mission, and that mission isn’t just money.”