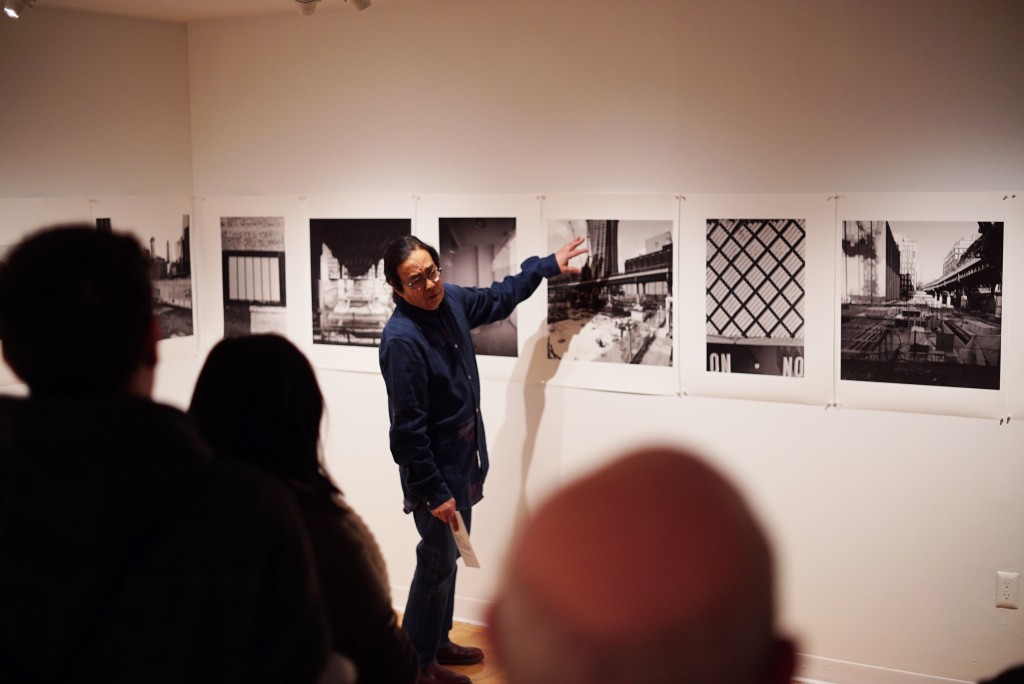 Professor Warner Wada’s one-person exhibit of black and white photography, featuring 1970s-era Pittsburgh and present-day New York City from as recent as 2018, is on display in the Pascal Gallery of the Berrie Center.

Photographs from the exhibition titled “Warner Wada’s Photographs: Pittsburgh 1975-77, New York: 2016-18” are arranged along the walls of the Pascal Gallery in alternating order, every other photograph shifting from Pittsburgh to New York.

“It’s a uniquely large show with 39 photographs. If you go to galleries in New York and you look at photography exhibitions by one person they’re usually around maybe 20 photographs,” Warner Wada said during a recent interview with the Ramapo News.

Professor Wada’s exhibition of photographs arrives at a time when photography has been recognized by the fine arts community more than ever before. Although photography was by no means a new medium, its value as an art form became more accepted during the 1970s around when Wada began taking photographs of Pittsburgh in 1975.

From 1974 to 1978, he lived in Pittsburgh’s Polish Lawrenceville neighborhood. He taught art at the University of Pittsburgh where he received a faculty research grant to photograph the mill towns of the Monogehela River Valley for two years, including Homestead, Braddock and West Mifflin among others.

Wada had never exhibited these photographs nor printed them as large as the ones that appear in the gallery, until this year. After scanning the negatives over winter break on Ramapo’s new Imacon virtual drum scanner and printed them on an Epson 7900 inkjet printer, he recalls being impressed with the quality of the photographs that was enhanced by the dark room’s film scanner.

Wada said he was thankful to receive assistance from the darkroom’s supervisor, Eva Fazzari, with scanning and printing the photographs.

In addition to his joint degree in painting and photography, Wada also has a degree in architecture. He recalls being drawn to his alma mater, the Art Institute of Chicago, for its magnificent architecture.

“Architecture is something I’ve always looked at because I’ve studied it. The [New York City] photographs in the exhibit, I consider them architectural,” he said.

Wada moved to a loft in the Garment Center in 1978 shortly before accepting an art teaching job at Ramapo College in 1979. Nearly 40 years later,  he began taking photographs in Midtown and Soho for the series “Manhattan Bedrock” with a specialized super wide-angle camera in 2016.

Reflecting on this current exhibition, he said it was especially rewarding to see differences and similarities presented in his work from 40 years ago compared to his photography from just last year.

“It’s a great opportunity to look back at the work you did right after you were out of grad school and say well ‘how good is it?’ he said.

“Warner Wada’s Photographs: Pittsburgh 1975-77, New York: 2016-18” will be on display until April 19. The Berrie Center’s Pascal Gallery is open on Tuesday, Thursday and Friday from 1 to 5 p.m. and Wednesday from 1 to 7 p.m. The gallery will be closed for spring break during the week of March 18.