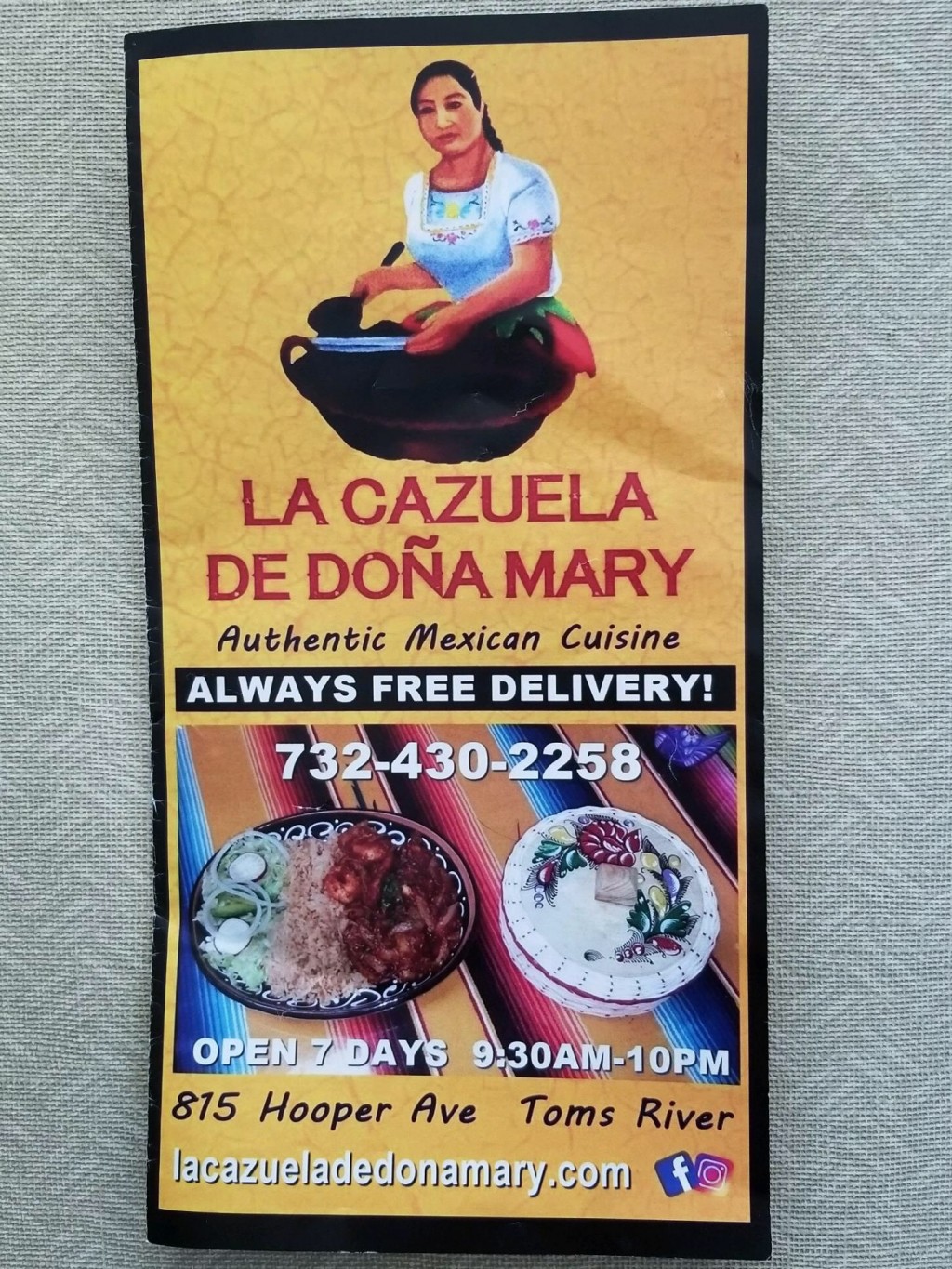 Less than a mile from the Garden State Parkway exit enroute to Seaside Heights, a new Mexican restaurant opened on the corner of Route 37 and Hooper Avenue in Toms River, NJ. La Cazuela de Doña Mary is a vibrant addition to the small strip mall that's packed with nondescript storefronts including a cabinet outlet and a walk-in dental practice.

When making plans over spring break with my hometown best friend, she decided to take me to this new place solely based on her opinion that they have great tacos.

Although she ate at La Cazuela with her family before, it was my first time there, and despite the fact that my Mexican food expertise does not extend far beyond hard-shell tacos, I was struck by the authenticity of this new restaurant.

Upon walking through the door and picking our table, we both agreed that it felt like we were seated in someone’s home rather than a restaurant. Inviting, bright table cloths were draped over the tables, and immense murals consumed the room.

Compared to the bleak industrial décor in Chipotle or the garish maracas tacked on the walls of Moe’s, I immediately admired the mural’s proud embrace of Mexican culture.

One mural poignantly illustrated the American Dream, as a Mexican family travels across the Mexico-United States border heading towards the New York City skyline.

Although I am routinely steadfast in ordering hard-shell tacos at nearly every Mexican restaurant I visit, I was somewhat more adventurous in ordering one soft taco to-go along with the five hard-shell ones I ordered. Ultimately, I regretted this.

For the first time that I can remember, I actually enjoyed the soft taco more than the hard-shell — the soft tacos had handmade flour tortillas topped with fresh cilantro, radishes and onions. Differing from the Americanized pocket shaped shell, the hard-shell tacos were wrapped up more like taquitos with very little meat compressed in the hollow corn shells.

However, I did appreciate the presentation of the hard-shell tacos that were blanketed beneath a salad of stringy lettuce and creamy avocado alongside a plentiful portion of Spanish rice. Of course, the restaurant also succeeded with classics like chips and salsa and a picturesque assortment of Jarritos sodas.

Another mile further up Hooper Avenue sits another popular destination for Mexican food called “Cinco de Mayo.” However, this restaurant has garnered criticism among many Spanish people for its lack of authentic Mexican cuisine.

This new restaurant provides people with a much wider selection of authentic Mexican food from sandwich styled cemitas to entrée worthy tlacoyos.

Fortunately, La Cazuela de Doña Mary reigns at the center of a disappointing Mexican food chain triangle that includes Moe’s, Chipotle and Bubbakoo’s Burritos. Thankfully, I have a new local alternative when the craving for Mexican food hits.