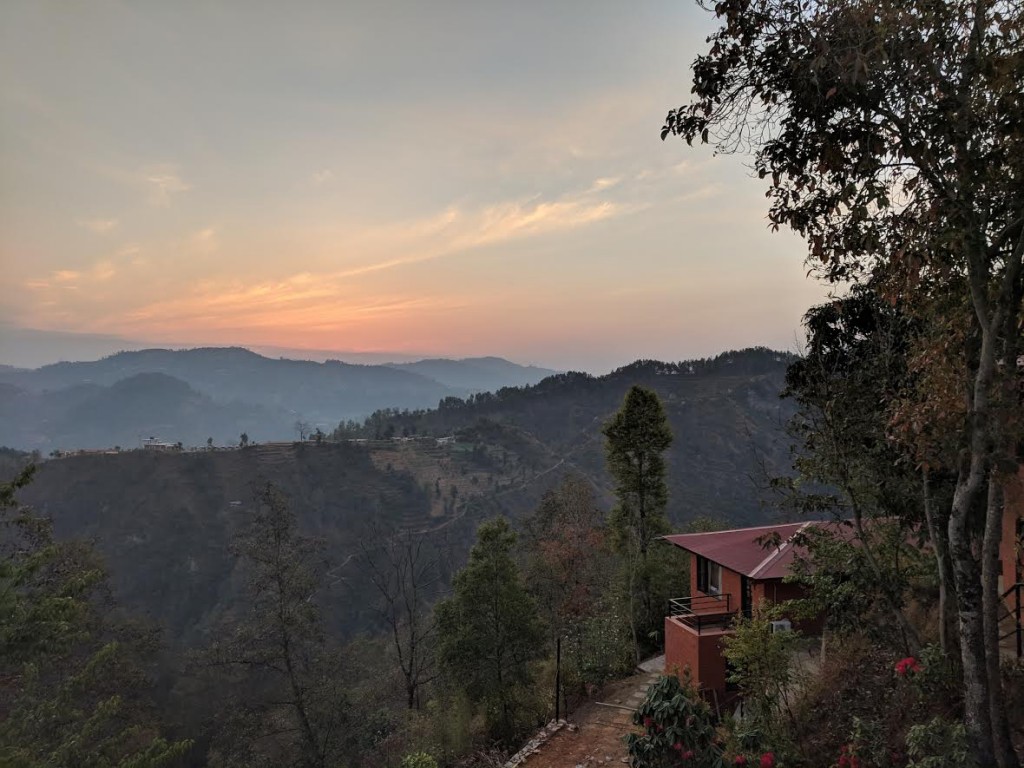 Ramapo College’s honors program launched its first-ever “alternative break” this March, sending 15 students abroad to Nepal for a week of sightseeing and service learning. The trip was cosponsored by the Center for Student Involvement and the Roukema Center for International Education, which provided funding and other support for the excursion.

It was led by Dr. Susan Hangen, the dean of the Salameno School of the Humanities & Global Studies, and Rajesh Adhikari, the Roukema Center’s director of international student and scholar services. I joined as one of the 15 students, eager for the chance to visit Asia. The trip’s low cost ($1000 per participant) made the opportunity possible. We left for Nepal on Thursday, March 14, flying out of Newark, New Jersey aboard flight EK0224.

Somewhere above Europe, as my body was shoved in an economy-class seat, I was struck by the unfortunate banality of commercial air travel. It was a shameful epiphany: At some point in the short history of aviation, humanity had reduced the transcendent act of flight to an exercise in tedium. My revelation, of course, was hardly a pioneering thought. I thought of Henry Miller.

The itinerant author had grimly described a situation similar to my own in “The Colossus of Maroussi,” his 1945 travel memoir. “I felt foolish sitting in the sky with hands folded,” Miller wrote. “In short, it was unrelievedly dull and pointless.” But Miller had griped about a short flight between mainland Greece and the island of Crete.

We were halfway through a 15-hour flight from the U.S. bound for the United Arab Emirates. After a layover in the immense Dubai International Airport, we boarded another jet and cruised past the Himalayas en route to Tribhuvan International Airport in Kathmandu. As we touched down in Nepal, Dr. Hangen smiled. “Welcome to the other side of the world.”

The immense structure, or stupa, has been a place of Buddhist worship for centuries (its age is contested, although most estimates set construction of the monument in the late fourth century C.E.). The faithful walk the stupa’s perimeter in clockwise fashion, pausing to spin the countless prayer wheels decorating the walkway.

Our group joined the flow of traffic, eventually making our way to the second level of the stupa. Above us, small figures adjusted prayer flags and splashed fresh paint atop Boudhanath’s peak.

Dr. Hangen surveyed the crowd below, among which wandered white men and women with meditation mats strapped to bulky backpacks.

“They say the majority of westerners come to Nepal to save it or be saved by it,” she said. “Dharma bums and development bums. And then you have anthropologists like me, who are trying to study it.”

I ask Dr. Hangen if the so-called Dharma bums seeking enlightenment in Nepal (the birthplace of the Buddha) are guilty of fetishizing Eastern culture. She doesn’t think so, but won’t rule out the possibility.

We next visited the old city of Bhaktapur, a few miles outside of Kathmandu. It was a labyrinth of scarlet beneath a blue sky that day – red brick, red dust, red meat hanging from butchers’ open-air stalls. In Dattatraya Square, I stood by earthquake-crumpled statuary as the sun began to set. Percy Bysshe Shelley’s “Ozymandias” came to mind.

The lushness of rural Nepal stood in stark contrast to the congestion of Kathmandu. Following our visit to Boudhanath and Bhaktapur, we spent several days in the countryside village of Balthali. It is the most beautiful place I’ve had the privilege of visiting.

Trekking Balthali’s clay roads, I frequently paused to gawk at the terraced farmland lacing the hillsides and the dense woodland locking us away from the rest of the planet. Adhikari had brought us here to participate in service work projects coordinated by Bishnu Belbase, a leader of a Nepalese NGO affiliated with the international group Mercy Corps.

With Belbase, we toured a local health clinic before spending time on a variety of ongoing projects. First-year student Kate Gavin planted potatoes in a small plot of land outside the village center. She found the experience fulfilling.

“To see people planting each potato individually … gave me a lot of appreciation for all that they do,” she said. “I was really humbled to work with, and hopefully help out, these farmers.”

I discussed this concept of “service learning” with Adhikari several days later. Adhikari, himself a native of Nepal, thinks “cultural immersion” and service learning cultivates a sense empathy and awareness among students.

“All the luxury back home – it’s all given,” he said. “We don’t give a second thought to the billions of people in this world who don’t have what we have.”

Adhikari describes service learning as “giving by learning.” He hopes the honors program’s brief taste of village life sparked a desire among students to help the impoverished while recognizing the dignity of the affected people.

We rounded out the trip with a return to Kathmandu and its neighboring cities. On Wednesday, March 21, we celebrated the national holiday of Holi in the streets, greeting locals and fellow tourists alike with hugs and handfuls of colored pigment.

On Thursday, Anil Chitrakar, an internationally-known engineer (the World Economic Forum recognized Chitrakar as a “Global Leader for Tomorrow” in 1993) led us on a tour of the temples and monasteries of Patan, the third-largest city in Nepal.

Afterward, we spent two afternoons with Ashmina Ranjit, one of Nepal’s premiere artists and a friend of Dr. Hangen’s. Ranjit described feminism as the driving force behind her provocative art and activism in Nepal, a country home to a deeply patriarchal society. “A lot of people hate me,” Ranjit laughed. “But I have many friends as well.”

Days after their return home to Ramapo, the beauty and vibrancy of Nepal had not dimmed in the imagination of the honor students. “I’m in awe of Nepal,” Gavin said. “The country has a never-ending hum of energy.”

Fellow first-year student Griffyn Leeds agreed. “It was a once in a lifetime experience, and one I will never forget.”