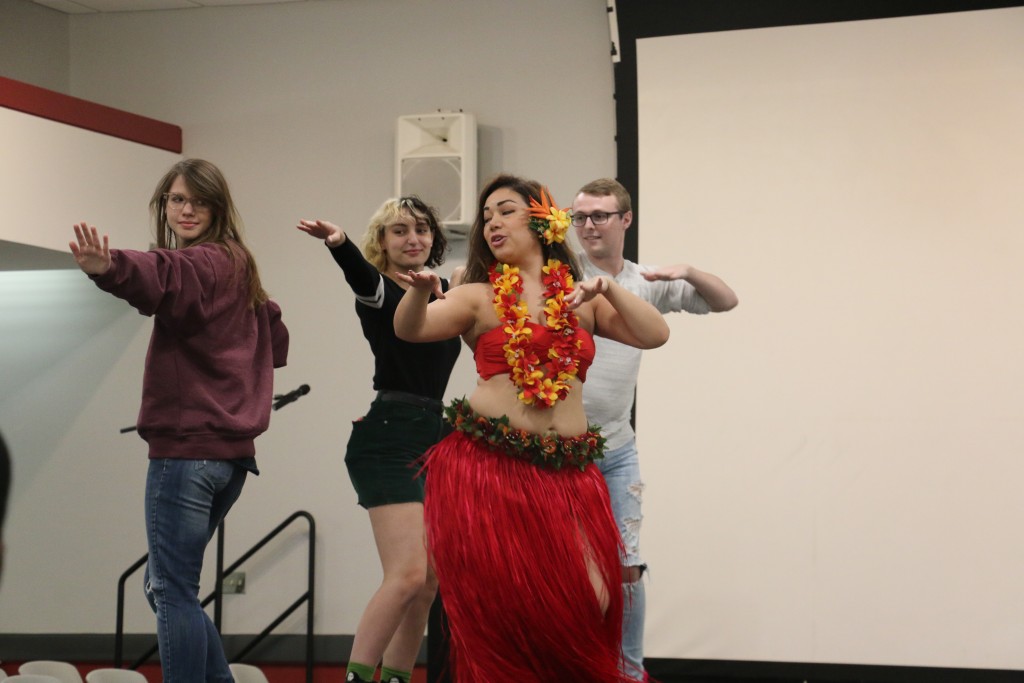 Asian Pacific Islander Month, celebrated in April, will feature a variety of events at Ramapo College that highlight the experiences of Asian Pacific Islanders. Among these heritages are native Polynesians whose identities have been acknowledged less since Hawaii became the 50th state.

To begin the celebrations, the Office of Equity, Diversity, Inclusion and Compliance hosted the opening proclamations. This included a reading by President Mercer of one of the law documents that officialized Asian Pacific Islander Heritage Month. Following this was an audience interactive performance of traditional Polynesian dancing by performer Nalani.

The performance began with the song, “He Mele No Lilo,” which the audience may have recognized from the soundtrack of Lilo and Stitch. Nalani used traditional Hula dancing props such as ‘Uli’Uli and an ipu – shakers and a drum, respectively. Additionally, she wore classic Hawaiian hula attire, barefeet and all.

Nalani brought audience members onstage to learn the dance to the “Hukilau,” another Hawaiian favorite. Students and faculty alike joined her on stage to mimic her movements and hula.

The movements of hula dancing vary from movements of other traditional Asian Pacific Island dancing, Nalani noted in an interview with the Ramapo News.

Hula is a kind of dance used in Polynesian, Tahitian, Tongan and many other cultures. Nalani spoke on her experience with hula having grown up with family in Hawaii and visiting the Polynesian cultural center to learn when she visited.

Dance is just one form of connection to Asian Pacific Island culture that Asian Americans might use. The rest of the month of April’s events will explore film, food and more ways that these cultures express their pride.

Part of this month’s events will also discuss the intersectionality of sexuality and gender with Asian Pacific Island heritage. The Women’s Center is just one of any organizations that will be taking part in this month, alongside clubs like the Filipino American Student Association and the South Asian club.

Like other months that represent diversity in America, Asian Pacific Islander heritage month brings much to be learned to Ramapo students. This month was established in 1990 by Congress after the 1979 passage of a week by the same name.

Flyers with the events of the month can be found around school and will be featured on the Daily Digest – keep your eyes out for opportunities to learn and enjoy fun cultural events.