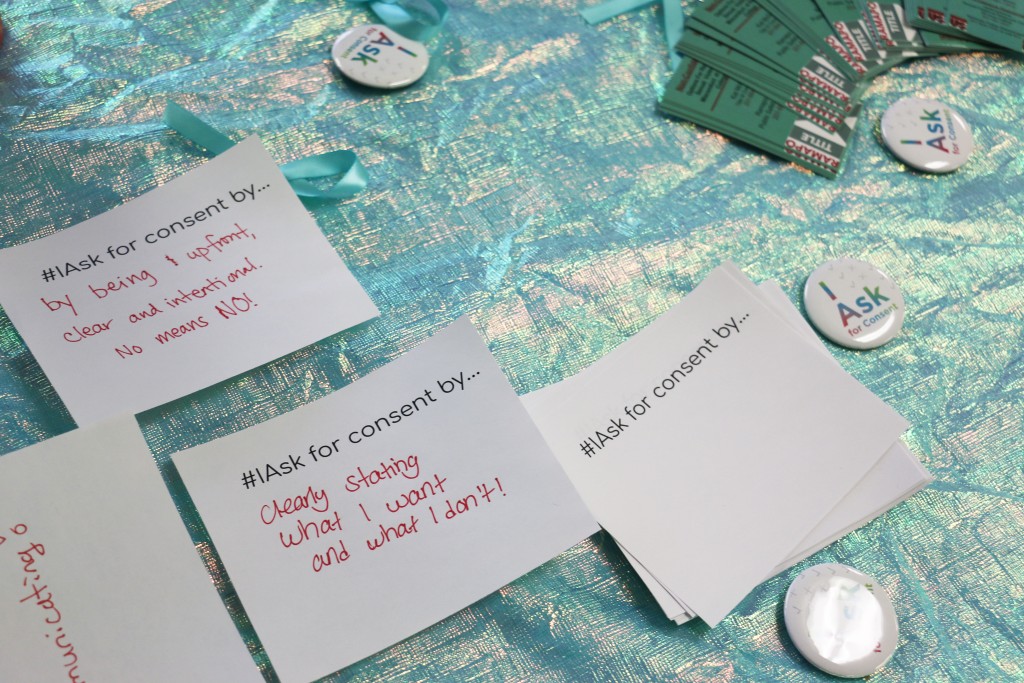 The Office of Violence Prevention (OVP) set up a table this week in the Student Center’s Fish Bowl to inform students that April is Sexual Assault Awareness Month. OVP student coordinators explained the meaning behind the phrase “I #ASK for Consent,” which was coined by the National Sexual Violence Resource Center, and asked students to write down what they believe constitutes proper consent.

OVP coordinator Marie Attis-Springs said she is looking forward to educating students about the role of violence in issues of sexual assault throughout a month’s worth of programming and events. She said she is also proud that the OVP is partnering with other on-campus clubs and organizations throughout the month of April to spread awareness about sexual assault.

President Mercer will make the opening proclamation for Sexual Assault Awareness Month in the York Room on Friday at 10 a.m. Immediately following the opening proclamation, Dr. Traci West, professor of ethics and African American studies at Drew University, will present a lecture on her new book titled, “Solidarity and Defiant Spirituality: Africana Lessons on Religion, Racism, and Ending Gender Violence.”

The Denim Day Fashion Show is the final event of Sexual Assault Awareness Month. It will be held on April 24 at 9:30 p.m. in Friends Hall. Denim Day is renown as a worldwide initiative to prevent sexual violence and to reinforce the idea that consent cannot be determined based on the clothes people wear. The Office of Fraternity and Sorority Life and other on-campus organizations will take part by wearing denim outfits on April 24.

“[The OVP] tries to make the events engaging and informative, not just solely about fun,” Attis-Springs said.

Student program coordinator Krupa Lanka said when organizing events, the OVP strives to make inclusivity a priority. She said events like Nacho Macho Night are intended to establish a dialogue for male victims of sexual assault whose experiences are often left out of the dominant narrative surrounding sexual assault.

The Office of Violence Prevention is currently seeking Violence Intervention Peers (VIP). Lanka recommends the peer experience for students who would like to learn more about organizing events and gaining leadership skills.

In addition to leadership training, peers also receive sexual assault awareness training to give them a skillset to bring awareness to the realities of sexual assault, dating violence, stalking and other forms of interpersonal violence.