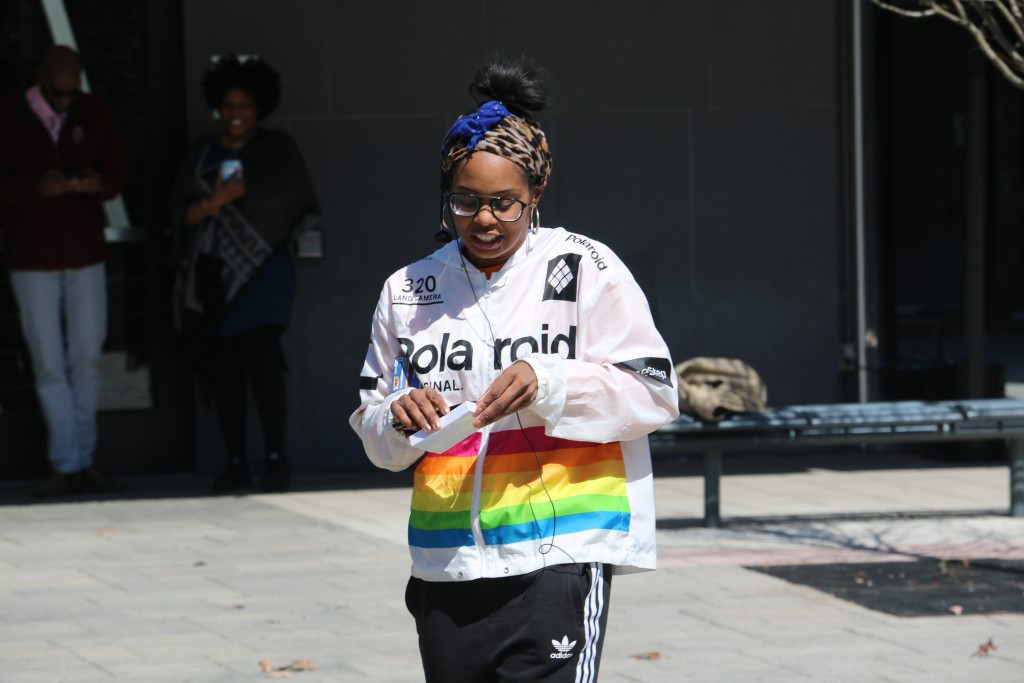 In a follow-up to her presentation in the Berrie Center, Shamell Bell hosted a dance workshop at the Arch on Thursday, April 4.

Bell, in an interview with the Ramapo News, shared how she hopes her activism will help break down issues and stereotypes. In conjunction with her qualms with “respectability politics” she uses music that might be deemed “ratchet.”

The use of honest, non-sanitized art is important to break down stereotypes. Bell spoke about how the power structure in America promotes a certain way of talking about issues, one that she finds problematic.

“What’s wrong with the ghetto?” She laughed. The ideals that define communities of “gangs” and “ghettos” are part of the structure she works to disassemble.

Splitting students and staff into groups to come up with their own dance routines, Bell walked around and excitedly took in the energy flowing in the courtyard. This energy was then called up as each group performed, and the other groups cheered them on.

All together, students learned kinesthetically just how this type of activism brings members of a community together to express their feelings.

Dean Peter Campbell of the Contemporary Arts School at Ramapo spoke about how important he finds the work bell is doing, and how he felt Ramapo students could learn from it.

“Many political movements and art practices have  a lot in common,” he said on why he aims to bring protest art to the Ramapo campus. One of his goals as a dean and educator at the college is to “incorporate activism into the classroom.”

Outside of the classroom is where academics and activists like Shamell Bell come in.

“We hear it on TV, from politicians, but we don’t have experience opening space for discussion,” Campbell said. Since meeting Bell at a Harvard workshop, he has spent the last few years finding a way to bring her work to campus.

Series like Ramapo’s “!!!Public Art???” allow students to get a sense of real world issues and how they can become a part of movements. Bell believes that every individual with a cause has a talent that can be brought to the table.

When discussing the arguments against her use of “gang theory” in street dance activism, Bell notes that she aims to be a leader in changing connotations of black communities, especially those with gang culture.

“The violence is a symptom of a larger societal structure.”

Leaders in activism like Bell have a perspective to bring to Ramapo College that can’t be found elsewhere. Thanks to staff like Dean Peter Campbell, students are given the opportunity to take full advantage of these unique learning opportunities.