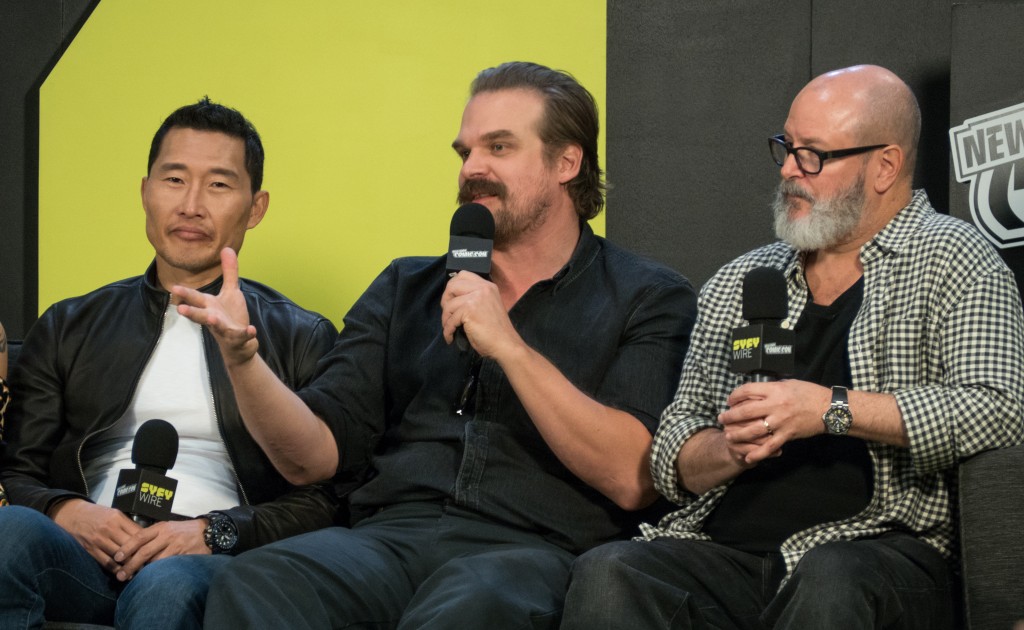 In 2004, amidst the comic book movie craze that was primarily brought upon by blockbusters such as Bryan Singer’s “X-Men” (2000), and Sam Raimi’s “Spider-Man” (2002), Guillermo del Toro’s “Hellboy” came completely out of nowhere. The gothic fantasy-loving director managed to turn Ron Perlman’s portrayal of the red-skinned, superhuman demon himself into a critical and modest financial success.

This left many fans of the franchise to believe that the journey has ended, until Lionsgate executives began to, unfortunately, think to themselves, “Well, we technically own the film rights to 'Hellboy,' and since audiences love the 'Deadpool' movies, let’s reboot it and make it rated R, to see how much money we can get from it.”

Originally summoned by the Nazis during World War II, only then to be adopted by Trevor Bruttenholm (Ian McShane), Hellboy (now played by “Stranger Things’” David Harbour) has always been seen as an outsider by the humans that surround him. Even when he is assigned to “exterminate” other demonic threats by the Bureau for Paranormal Research and Defense (or “B.P.R.D.”), he still recognizes the fact that he is not like everyone else, despite his human qualities, such as desires to drink beer and make quips.

However, when the ancient sorceress Nimue the Blood Queen (Milla Jovovich) becomes resurrected by a hog-like creature known as Gruagach (Stephen Graham), the fate of the world now lies in the hands of Hellboy, along with the supernatural psychic Alice Monaghan (Sasha Lane) and B.P.R.D. military officer Ben Daimo (Daniel Dae Kim), who is capable of turning into a fierce jaguar when in state of anger or pain, whether he likes it or not.

Now to be fair, I give a lot of credit to the film’s director, Neil Marshall, for at the very least, trying to give this reboot a fair opportunity, especially upon hearing recent reports that Lionsgate had interfered with the project on almost a “Spider-Man 3” level. With that being said, “Hellboy” is nothing more than a clear reminder that Hollywood filmmaking can often be at its worst.

From the opening scene alone, it’s obvious that something happened during either production or post-production, and whatever it was, it certainly wasn’t leaned in the favor of the audience. With a narrative that is too unfocused and uneven for its own good, jarring editing that occasionally makes “Suicide Squad” (2016) look impressive by its own already-low standards of shot-to-shot cohesion, and an overreliance on CGI that, because of an only $50 million budget, often looks as if the green screen didn’t render properly, the film can be an absolute drag to even sit through.

The only compliment I can give is Harbour’s performance as the titular anti-hero, but even then, for every chance that he gets to shine, it is immediately followed up with constantly yelling dialogue that supposed to come off as humorous, but instead seems more obnoxious above all else.

With a screenplay by Andrew Cosby that tries so hard to be R-rated, almost as if to tell the audience “Look at us! We’re using constant profanity and gore to make it seem like we’re so cool! And we are cool, right?” Hell no. The film tries so hard to impress its audience with so much violence and vulgarity from each other characters, and none of it feels like it’s been earned. It comes off more as an excuse to have the MPAA give them that R-rating.

Simply put, “Hellboy” is a reboot that fails to appeal to any audience. Critical viewers looking for a competently made action blockbuster will completely say otherwise, and fans of del Toro’s original incarnation of the character will not be pleased to see that this was chosen over “Hellboy 3.”

With “Shazam!” currently in theaters and “Avengers: Endgame” right around the corner, this is one superhero flick that nobody needed, nobody wanted and judging by its current box office estimates, nobody will bother to recognize its existence come next week.